Daron here. Time for a liner note and I needed a break from the angst. (It’s OK, you can laugh about it.) ctan’s here, too, though, to talk about some site stuff.

ctan: I wanted to point out one weird thing about our website stats. Every year there is a dip in readership in July. The overall trend since 2009 is that stuff goes up basically every month, but there’s this noticeable dip in July… and then it rebounds in August to be higher than June.

Daron: More people going on vacation and not keeping up with their web reading?

ctan: I always thought August was the big month for vacations, but yeah, that’s the only explanation I can come up with, too. And then in August they all catch up, I guess? So what’s on your mind this month?

Daron: I wanted to show some photos first of all, of fake amps.

Daron: You see these setups at a lot of shows. They’re to make it look like there’s a big sound system when there actually isn’t. This week a photo from the Warped Tour made the rounds on the Internet. But a quick Google search turns up many more, like the one below from Black Veil Brides. Sorry I can’t attribute these to their original sources–they were on so many blogs I could not figure out who took them originally. 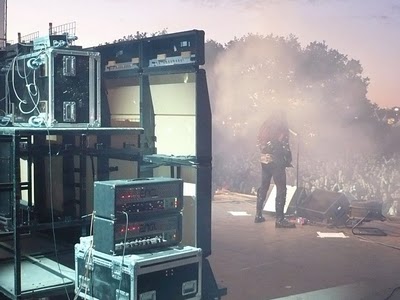 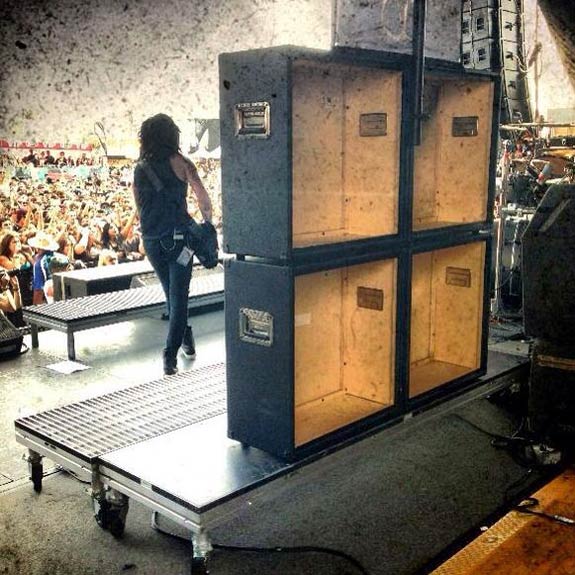 ctan: Wait. I just had a thought. That amp stack that Ziggy climbed in New York…

Daron: I don’t know. It’s possible it wasn’t as sturdy as expected because it wasn’t real. And that would explain why no one was killed by the falling amps. But I honestly don’t know. My memory isn’t that good and no one I asked knew for sure. I don’t think they were fake, though, because one reason to have fake amps is because you’re actually plugged into the house sound system, and then you use real amps when you have to play somewhere you need them. But at that ballroom, I don’t know what the deal was.

ctan: In the chapter you said the venue had rented the stuff.

Daron: Right. Huh. Who knows. Maybe they wanted to make it look like they had rented more than they had. I don’t know. I can’t know everything, though I try.

ctan: Would you play there again?

Daron; Yeah. But it’s stuff like this that makes me want to turn into a total control freak. But you can’t. You can’t do everything and you can’t make every decision. You have to delegate. You have to trust the people you delegate to. It’s tricky.

ctan: Phli Varone says something like that in his book Un-Philtered.

Daron: That book! Now I see why Barnaby said traveling with Moondog Three was tame.

Daron: Yeah. Remember I was talking about this back in the Texas chapters, I think? About getting the feeling they were tamping it down around me? I think it’s a matter of degree. Sure, we didn’t reach Aerosmith or David Lee Roth level of “party”–we just didn’t do as many drugs–or as many groupies–as a lot of touring bands. But the crew was tamer, too. Barnaby told me it was because of me and Carynne.

Daron: First of all, having a woman in charge immediately put everyone on their best behavior, apparently. So, you know, there were still roadie pranks but nowhere near the level of disgusting as they can get.

Daron: You know. Stuff like… one roadie sneaks another’s toothbrush, sticks it up his butt, and takes a picture of it. Puts the toothbrush back, waits a few days, and then tapes the photo to the bus door.

ctan: Which end of the–

Daron: I did not see the photo myself.

ctan: And they don’t do that kind of thing when Carynne’s around? Okay. What about you, though?

Daron: Well, back in the day anyway, once I was outed to the whole crew? No one wanted to be taping photos of their naked ass to my bus door. 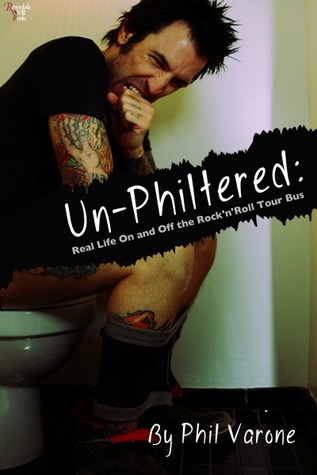 Daron: Can we review Phil’s book, though?

ctan: Sure. You start.

Daron: Okay, here goes. Phil Varone’s “Un-Philtered: Real Life On and Off the Rock ‘n’Roll Tour Bus” is what the title implies, a direct spew straight from the slightly cocaine-addled brain of the former drummer for the bands Saigon Kick and Skid Row. Chapters describing antics and adventures while touring are interspersed with rants about subjects like how the Black Friday “holiday” is a sign of the ruination of America. One of the more amusing of these is against using the term “rock star” to refer to anything but actual rock stars:

“If you’re watching football and the quarterback throws an amazing pass, he’s not a Rock Star of football. … When fans come to one of my concerts they don’t yell out ‘My god, Phil is a quarterback of drumming.'”

ctan: My favorite parts of the book, and the ones that were the strongest, were the parts about sex. Varone has kept in touch with or found many of the women he slept with in the 90s and 2000s and he has each one of them write their “Penthouse Letters” style account of their night with him. Each account is then followed by his side of the story. It’s sort of like everything that is actually interesting about “reality TV” only sexier.

Daron: Ah, right. Why am I not surprised you liked the sex parts best?

Daron: I had no idea straight guys had that rule, too.

ctan: Well, they have pregnancy to worry about on top of the stuff you worry about.

Daron: True. My favorite part was the bit about their bus driver, Cowboy, and Phil’s drum tech, TJ. I can’t do it justice so I’ll say read the book. However. Warning: The Cowboy/TJ story makes the roadie prank I described above with the toothbrush seem really, really tame. Those with weak stomachs should skip it. Anyway, yes, it’s a very unfiltered look at the world of touring, so unfiltered that at times the punctuation and spelling go out the window. I kind of assumed that was part of the aesthetic and didn’t let it bother me.

ctan: The details: Phil Varone: Un-Philtered was published by Riverdale Avenue Books a couple of weeks ago (June 2013) and it can be nabbed in ebook or paperback form from Amazon and other places (including Riverdale’s own website). Varone apparently does a lot of this material as part of a Rock and Roll stand-up comedy routine that he takes on the road, too. He’s got a website: http://www.philvarone.com/about/comedy-2-2/

ctan: What’s funny is they’re covering the Daft Punk song that I literally heard five times a day while I was in New York for BookExpo.

Daron: You mean the Daft Punk song where they teamed up with Nile Rodgers and they do a sort of seventies funk reboot?

ctan: Exactly. Now I want John Taylor of Duran Duran to get together with Nile Rodgers and… I don’t know. Do something amazing.

Daron: Bart would be right there with you on that. And now, for something completely different. Paul McCartney making mashed potatoes.

Daron: By the way, please don’t ever let me do anything like that, ever.

ctan: Carynne would never let you. Didn’t it look like he came this close to gashing open his hand? Eeek.

Daron: I know. Maybe I shouldn’t be allowed to cook at home, either.

Daron: Okay, what! Holy fucking shit! Does he have a license for that thing? I know they say the bagpipes are an outdoor instrument only but that’s… extreme. I can’t top that. Oh no, wait. Yes, I can. What’s below has been making the rounds on the music blogs lately. It’s the vocal tracks from David Bowie and Queen recording “Under Pressure.” JUST the vocal tracks.

Daron; And people wonder why I fall in love with singers.

ctan: No one wonders that but you, dear.

ctan: All right. The only possible thing I can think of to top that is this. Meet Steve Grand, openly gay country singer (the first?) who didn’t think the music industry would accept him singing a song about being a gay country singer, so he recorded and released this video on his own, All-American Boy:

Daron: How does this have only 200,000 views? It should have like 2 million. Speaking of which, you can buy and download the song from Bandcamp for “pay what you want” here: http://stevegrand.bandcamp.com/ Buy it. And I say that even though I don’t usually even like whitebread pop country.

ctan: I thought you liked every kind of music.

Daron: The country I like is Johnny Cash at one end, Patsy Cline on the other. You know me. I generally don’t like anything that’s so overproduced it gets bland. Too much of the music out there is way too bland and country, for some reason, seems hit the hardest, given some of the music’s gritty roots. This song is really good, though. You know what’s the big moment for me in the video? Where he’s really vulnerable?

ctan: You mean it isn’t when they jump in the lake and you see his bare ass for half a second?

Daron: No. It’s when he shows himself at the piano. He’s got a guitar for a couple of seconds in the very beginning of the video, but closer to the climax, he’s at the piano. It says on his Facebook page he plays piano for tips.

ctan: You want I should put in a rant here about the guitar as a symbol of masculinity in American pop culture here?

Daron: Even me. And now we return you to your regularly scheduled angst. Stay with me folks, this is probably one of the rockiest sections of my road.