ctan: Daron. Did you realize that the fourth anniversary of DGC is coming up?

Daron: Of course not. I have no sense of time.

Daron: Holy shit. What should we do to celebrate?

ctan: Why don’t we ask the readers what they think? I still owe them two bonus stories as it is.

Daron: I think we should have a virtual party. You should host a chat or something. And everyone should bring friends.

ctan: Well, I agree everyone should bring their friends. I think that’s how a lot of readers discover us. But, okay readers, give us your ideas for how we all should celebrate the 4th anniversary?

Daron: In the meantime, I have a comment to make on the recent Miley Cyrus twerking controversy.

Daron: The comment is… no comment, other than watch this. The girl can sing. Everything else, as far as I’m concerned, is totally secondary.

ctan: Well, I think there is a lot of intelligent ink that could be spilled about how sexuality is misrepresented by the mass media… but people would rather just flip out. So I’m mostly ignoring the “controversy” since I think people are exactly as freaked out as Miley calculated they’d be.

Daron: Is the American public that predictable?

ctan: When a woman shakes her tits and ass? Yeah.

Daron: Point. Did you see Sinead O’Connor’s letter to her about how the music industry will gladly whore her out so she shouldn’t whore herself out?

ctan: I did. I thought the letter said more about Sinead than it did about Miley. In particular I think it revealed how badly Sinead was treated by the industry in the eighties.

ctan: I think it’s at least different now, for women in general, and for sexuality, too. Did you see Amanda Palmer’s open letter to Sinead?

Daron: Wow. Amanda is awesome. But in my view, Sinead is awesome, and Miley is awesome, too. Each in their way. Get all three of them together with Lady Gaga and that would be a concert I’d crawl over broken glass to see. And I have zero sexual interest in women so it’s not about that.

ctan: Yeah. Okay, here’s something I thought you’d like. It’s a map of Metal Bands Per Capita in the world:

Daron: I wonder how this compares to punk or other bands.

ctan: No idea. Or pop divas.

Daron: How’s this for cool? On Letters of Note. Here’s the letterhead of Sub Pop records in Seattle, carrying the deliciously ironic tag line of “Celebrating Several Years of Record Making!” Click the graphic below to see the full form rejection letter that they used to send to bands, which began “Dear Loser.”

ctan: Wow, and I thought writers had it tough. This reminds me of the letter that the Sex Pistols wrote to the Rock and Roll Hall of Fame when they heard they were inducted.

Daron: Amusingly enough, they have that on Letters of Note as well. HERE. And I quote: “Next to the SEX-PISTOLS rock and roll and that hall of fame is a piss stain… If you voted for us, hope you noted your reasons. Your anonymous as judges, but your still music industry people. Were not coming.” [sic]

ctan: Did you see the Salon article about how Generation X “went from jaded to sated”? We’re all self-satisfied and happy, apparently.

Daron: Because life begins at forty? Don’t you think every generation thinks that when they get to 40-something, though?

ctan: Probably. Every generation is self-absorbed in their 20s, too.

Daron: Is it going to take me until I’m in my forties to get there?

ctan: No spoilers. Speaking of getting there, I’m putting in a plug for Volume 5 of the Daron’s Guitar Chronicles ebooks here: 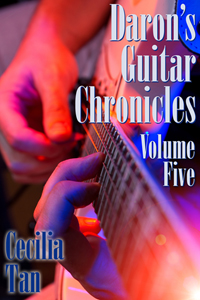 , will be live on other sites soon, and all three formats (PDF, ePUb, mobi) can be downloaded for a donation made through the ebook sales button below.

“Suggested Donation” means give any amount & still get the ebooks. I’ll just make one plea: PayPal takes a fee of 36 cents per transaction, so FYI if you give less than a dollar, they take most of it and I get almost nothing.

IMPORTANT:To get your download instantly, after your paypal payment goes through, click the “Return to ctan.writer @ gmail . com” link and you will be taken to a page with your download links.

Also, I’m trying out the new iBookstore widget. Volume 5 hasn’t gone live at Apple yet, but the other four are there:

Go figure, they have Book Four in the Category “Gay,” while Books One and Three are in “Fiction & Literature,” and Book Two is in “Contemporary” (which it isn’t…?).

While poking around the iBookstore I discovered this review from a reader. Lately there have been some awesome ones, it’s hard to pick what to quote!

“This is an amazing book series and this has been the best volume yet. I devoured this entire series in five days and was amazed that each book was better than the one that preceded it. Tender, amusing, honest, and amazingly perceptive writing on both music and the business that surrounds it (and I am a professional musician), I can’t recommend these books highly enough. Also, these books are surprisingly hot…very little gay-themed fiction that isn’t sold as erotica comes anywhere near to the heat generated in these books and this one in particular. Daron is an amazing character and I look forward to following his continued adventures in the days to come.”

Daron: My favorite review is from Amazon: “I am waiting patiently for the next installment. Very dramatic and overwhelming if you don’t know what you are getting yourself into.” Yeah, I agree. I’m overwhelmed a lot.

ctan: Speaking of Amazon, it looks to me like a lot of our readers might also like the following book, Another Rock Star by Paula Coots

Daron: Here’s the description: “Music is the driving force in Reed Lang’s life and he’s hit the jackpot when it comes to signing a major label deal and scoring a hit single or two. It’s never an easy task and certainly not for an out and proud gay man, even in this day and age. Now, it’s time to hire the backing band, shoot the videos, do all the promotion work and get out on the road. But what happens onstage is only half the show.” Truer words were never spoken.

ctan: I’ve been exchanging email with Paula, ever since an Amazon reviewer compared her book to DGC. I haven’t had a chance to read it yet, but I didn’t want to wait to recommend it to readers! How about this–folks, go read it and report back, eh? Meanwhile, this prompted me to look at the DGC Amazon reviews for the first time in a while. I really like this one: “The characters are complex and fluid. If you wish to take a chance please do yourself a favor and buy all the books. It really needs to be read in its total. All the characters go through growing pains, discovering who they really are, and do they like who they see in the mirror.”

Daron: I’m still trying to discover who I really am, though. Although I admit I know better than I did in the beginning.

ctan: How about this one: “…the characters. They are really fall-in-love-with-able. You’ll want to take Daron home with you and convince him to change. Well, unless you’re a guy, in which case you’ll just want to take him home with you.”

ctan: Or this one: “It is about two guys who can not, under any circumstances, ever, express an emotion, belief, feeling, or opinion in an open and honest way if it would be at all emotionally difficult. Just…can’t…do…it. Makes you want to hit both of ’em over the head with a thousand dollar guitar.”

Daron: Hey. We do express honest emotions! Mostly anger and frustration, but still. How about this one? “Are you sure this writer is not a gay youth posing as a woman who writes gay novels for women?”

ctan: Ha! It’d be easier for me if I could just let you write it yourself.

Daron: While you’re at it, let me write some music. I see a bunch that look like this one: “As a music lover, I’m sucked in to this story. It saddens me that Moondog Three isn’t an actual band, because I yearn to listen to their music.”

ctan: Hey, I let you play the guitar for a couple of hours this past weekend while I was out of it on cough medicine.

Daron: You were so out of it you’d tuned the guitar wrong. That really made things challenging for me.

ctan: It sounded pretty good though!

Daron: That’s because I’m adaptable. And because you were on cough medicine. I really did have fun playing along to the radio with the messed up tuning you gave me.

ctan: Sorry. I should’ve figured that out…

Daron: Don’t worry about it. I like alternate tunings.

ctan: All right. Okay, one last review. This one is my favorite of all. “After two straight weeks of reading I have caught up with the series. After all Daron and the gang have been through, I see the strength they have. I have even had things within myself come to light while reading the story. I don’t know if I could have handled all that Daron has gone through, but I am finding strength within myself to deal with my own stresses head on because of what I have read.”