ctan: Okay, we seem to have settled into this thing where every liner note we try to one-up each other with cooler and cooler stuff.

Daron: I didn’t realize it was a competition. I think it’s just easier this way than trying to wrestle the keyboard away from you.

ctan: Right. First we should talk about the impending Fourth Anniversary of the DGC website.

ctan: Four years. We’re going to do a couple of things to celebrate. One, I’m going to host a video chat, but I’m trying to figure out what the best day of the week and time of day to do it is. So, see poll at the bottom of this liner note to vote on that. Two, we’re going to do an Ask Me Anything style chat with both of us answering, and people can start submitting questions in advance for either or both of those ASAP, by leaving them in comments, or emailing me at ctan.writer @ gmail-dot-com. Three, we’re going to be part of a “gay rockstar” blog tour that will run in mid-November, with Paula Coots (Another Rock Star

Daron: Four, we encourage readers to do whatever they want to celebrate. Wear your Moondog 3 T-shirts, stick the bumper stickers in the restroom of your favorite rock club, make fan art, write songs, sing songs…

Daron: Sure. Though can I point out I don’t like spanking?

ctan: Not all fanfic includes spanking.

Daron: Hey, we all have our squicks. Just putting that out there. People don’t have to tell us what they’re doing to celebrate. Though it’s cool if you do. When’s the actual anniversary?

ctan: Well, we had a “soft” launch on November 1st–that is, I started posting but didn’t tell anyone about it yet. I think the “official” launch was November 10 or so? I plan to be celebrating pretty much from about November 10 to Thanksgiving.

Daron: OK, cool. So what have you got?

ctan: Actually first a question for the audience. Has anyone read Rob Sheffield’s 80s coming of age memoir, Talking to Girls About Duran Duran: One Young Man’s Quest for True Love and a Cooler Haircut

? It’s on sale at Amazon for six bucks right now in paperback and I’m trying to figure out if I should buy it.

Daron: You should at least put it on your wish list. Hey, when can I have my own wish list?

ctan: When you get a credit card?

Daron: Oh, like that would prove I’m a real person.

ctan: Anyway, you’ve heard me rave before about how much I love Tab Kimpton’s Khaos Komix. The story cycle of Khaos wound down a while ago (and now Tab just had a Kickstarter to produce the box set). Folks have been wondering how on earth Tab can possibly top the fantastic angsty magic that was the interconnected lives of eight queer/trans teenagers?

Daron: Indeed, I have been wondering that. Khaos Komix makes Moondog 3 look functional. 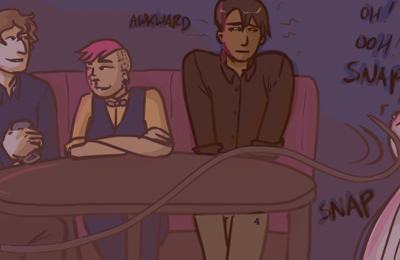 From "Shades of A" by Tab Kimpton. 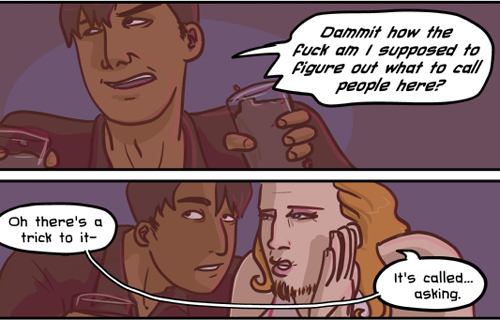 ctan: For those of you who really enjoy watching Daron struggle to figure out his relationships and/or to try to pretend that nothing is going on/going wrong, you will love Anwar, the main character in Shades of A. Just go read it: http://www.discordcomics.com/shades-cover/

Daron: Tsk. Well, I suppose I can’t really complain since you got me there. Here, distract yourselves with this video sent to me by Nona, one of our readers. Unbelievable cover of Sweet Child O Mine, played on the “chinese zither.”

ctan: Okay, then I’m coming back atcha with this one that LenaLena sent. She originally linked me to this blog entry: http://chasingmusiclife.com/?p=461 which gives some context for the mind-blowing musical video below. The group is called Snarky Puppy, and they do these film concerts/jam sessions with the audience live on the stage with them. In this one, they have vocalist Lalah Hathaway joining them. She gives an incredible vocal performance all throughout, but she builds up to a point between minute 6 and 7 where she actually sings chords.

Daron: Oh my god. You can see all the musicians flipping out because they’re like, what! Did I just hear that? And then she does it again, and again, and each time their minds are totally totally blown. MY mind is totally blown. Holy fucking shit. And the whole rest of it was already mind-meltingly awesome. You don’t even have to like jazz. Wowwww.

ctan: Okay, while you calm down, I’m going to talk numbers.

ctan: See, I recently noticed a thingie in the website controls that lets me see how many “approved” comments a user has. Not surprisingly, you, my dear, have left the most comments, with 1,228 posted on the site. I come in second with 883.

Daron: Well, more people talk to me than to you?

ctan: Apparently. It doesn’t let me see a ranking or anything–just every time someone posts a comment, I can see a little number by their name. Out of curiosity I looked at everyone who has posted a comment since Sept. 1 to see what kind of numbers were there.

Daron: You mean how many people posted since Sept 1?

ctan: Understand I don’t feel it’s a competition and there’s no prize for commenting more than anyone else, and also that this is not a ploy to try to get more comments. I just thought it was a neat number to look at.

ctan: I know you do, dear. Anyway, here’s the list of everyone who has commented since September 1st and who has left a grand total of more than 10 comments. (It’s not *completely* accurate since if you enter a different email address or spell your name differently, it counts you as a separate poster. So some folks posted more than this, and also some folks who used to post often haven’t lately.)

Daron: Cool! I wonder how many folks who used to post a lot but who don’t anymore had racked up, like Riki?

ctan: I’ll have to dig back a lot farther if I want to see. Seeing all the commenting leads me to wonder, actually, if readers would like me to install a forum or something where you could talk to each other more easily than in comments on the posts? Let me know.

ctan: There is that.

Daron: Okay, you better do your poll. Please keep those suggestions for how to celebrate the fourth anniversary coming, though, folks. 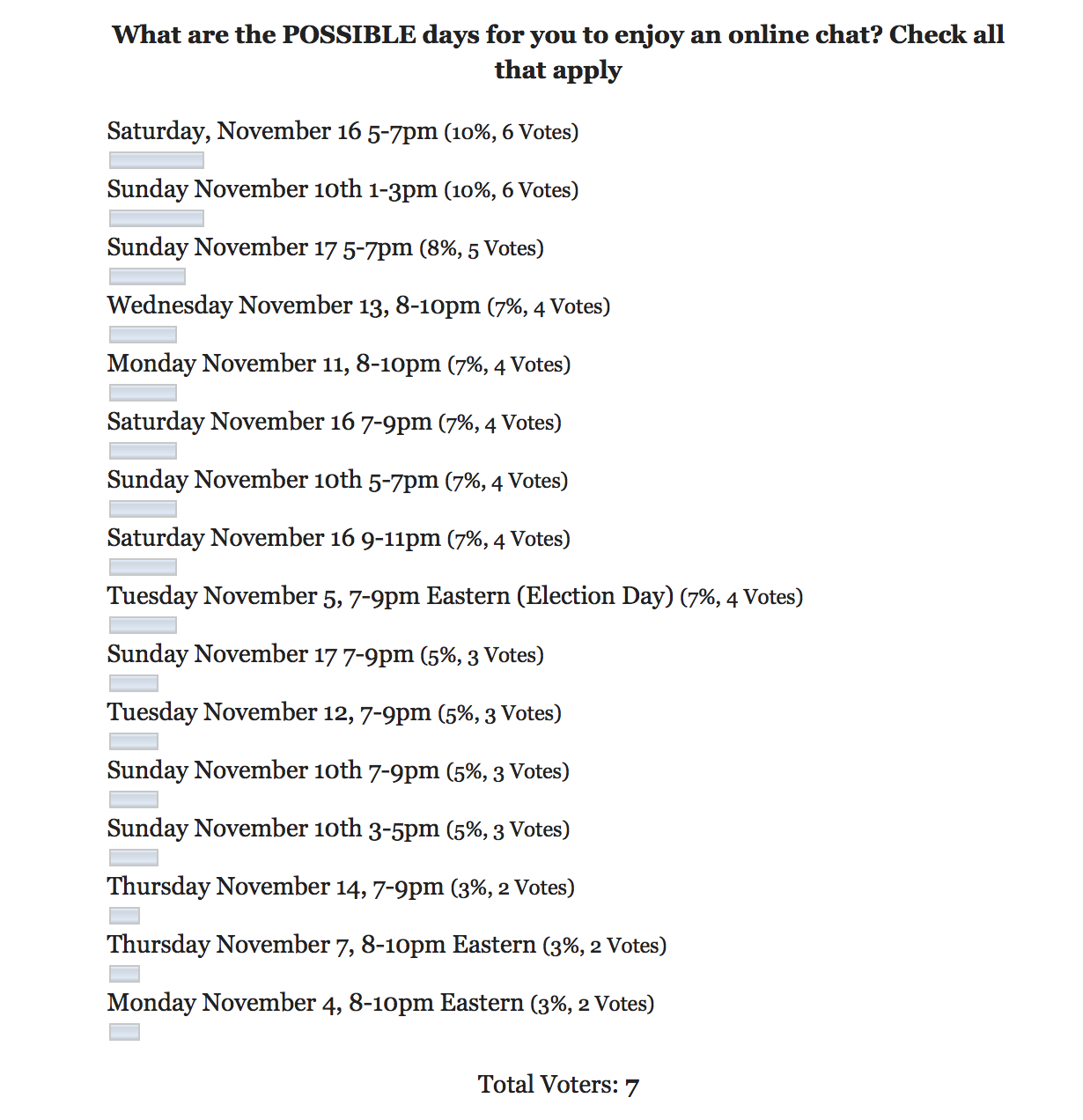 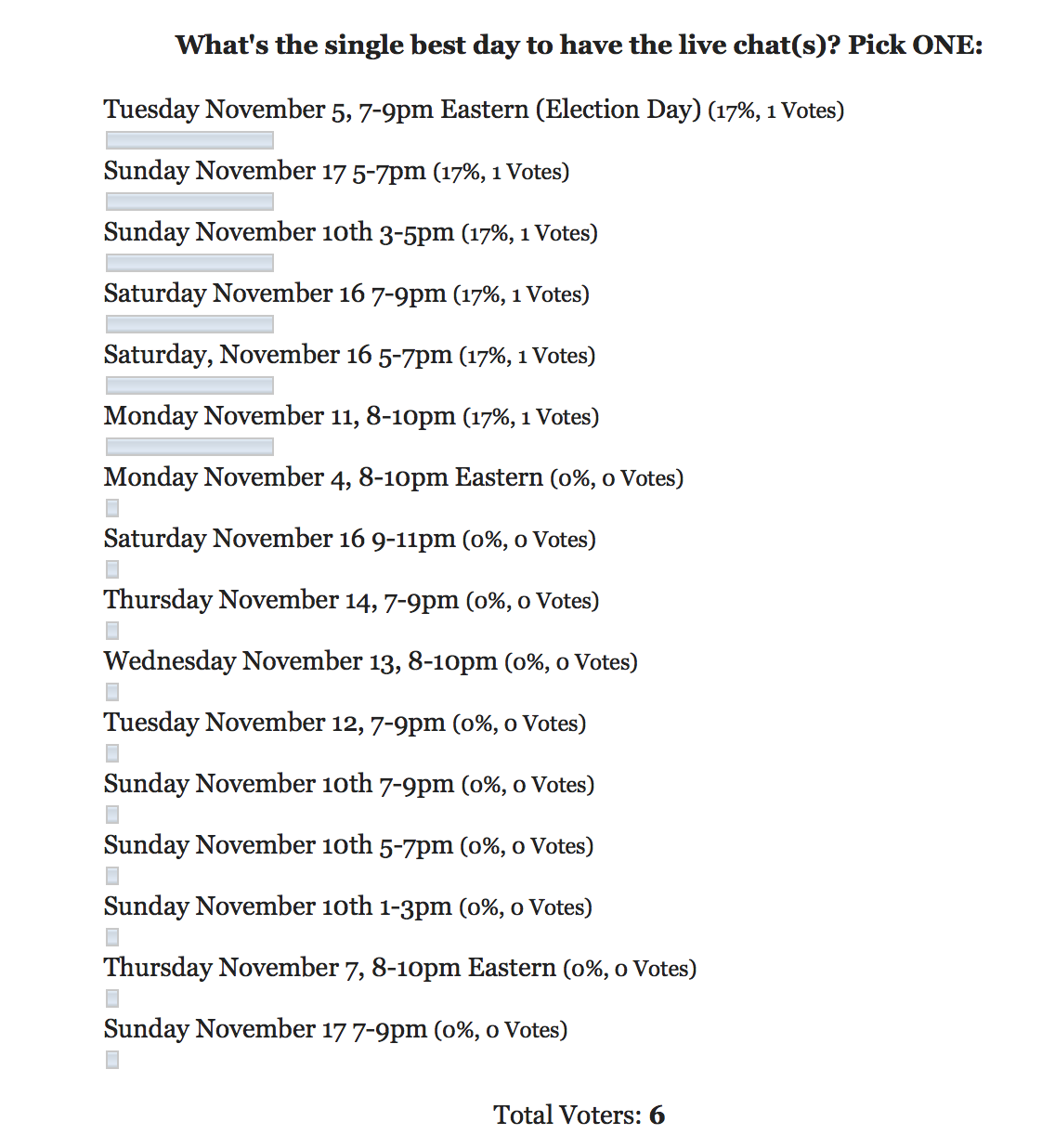