Yes, it’s been two years since the last Kickstarter and it’s time for another. My plan this time is to put Ebook 4 and Ebook 5 (comprising the whole cross-country tour) into one omnibus paperback. I’m estimating that it will come out about 40 pages longer than the previous one!

Here’s the video I made about it:

The gist is that we need about $3,500 to produce the paperback and fulfill the rewards. If we raise more than that I’ll also do some stuff like paperback editions of the individual ebooks, and even invest in website upgrades (or maybe moving to paid hosting). The rewards include some cool things ranging from the usual digital bonus scene rewards to Moondog Three tour swag to a stuffed animal tattooed with Sharpie by Ziggy.

The campaign will run 30 days, until May 9. The earlier you can pledge the better, though, as my stress level will be much lower if we reach the goal sooner! (The charges won’t be rung up until May 9th so you can pledge any time.)

Now for fun stuff. Daron, what have you got?

As this Flavorwire article says, the photography book by Alexandra Crockett “reveal[s] the softer side of menacing-looking metalheads, by way of their pet cats. Due out in May, the adorably evil Metal Cats features the felines that make these musicians, promoters, fans, and others purr. Band members from groups like Morbid Angel, Napalm Death, Black Goat, Isis, and Exhumed are featured throughout. A portion of the proceeds from the book will be donated to no-kill shelters in the cities hosting a series of related benefit shows.”

ctan: I need this book.

Daron: I already pre-ordered it for you on Amazon

ctan: Thanks! I love this from the author’s bio: “Beginning her idea for the book by doing promotional photos for bands and friends she would cat-sit for, she found an interesting dynamic between men in the metal scene and their cats.”

Daron: I like cats. I just don’t think it’s a good idea to have one when I can be gone months at a time.

ctan: Yeah. Okay, today I have a geography lesson and a history lesson. Which one do you want first?

Daron: Lay it on me.

ctan: Well, two actually. The first one is “This Map Shows Each State’s Most Popular Music Not Popular Anywhere Else.” On Spin.com: http://www.spin.com/articles/most-popular-music-by-state/ Here’s the New England section of the map: 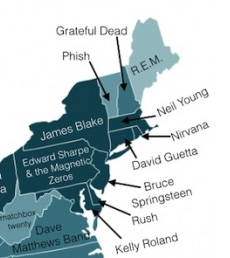 ctan: Followed by “The Actual Map of Each State’s Favorite Artists Is Kind of a Bummer” also by Spin’s Marc Hogan, who writes, “No Kurt Vile, but a whole lot of Drake, Jay Z, and Macklemore & Ryan Lewis.” http://www.spin.com/articles/map-favorite-music-by-state/ (Click the link to go to the full size) 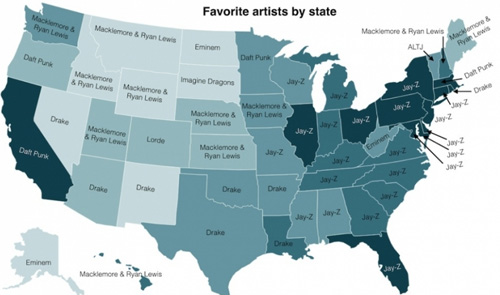 Daron: Thank god we live in the Daft Punk nation! Although Jay Z is cool, too…

ctan: Agreed. And I confess, actually, I don’t know who Macklemore or Ryan Lewis are. Or Drake.

Daron: Actually, is Macklemore the one who did the rap song I heard on the radio the other day about how he’s not gay but appreciates people who are? The lyrics were something like “When I was eleven I thought I was gay, because I kept my room clean and liked to draw.” Which obviously isn’t it since that doesn’t rhyme.

ctan: I’m Googling “when I was eleven I thought I was gay.” Wow. You are right. That is Macklemore.

Daron: We’ve heard that song in the car like ten times and never the name of the artist. So it had to be.

ctan: So my Google search brought up the Rap Genius website and I learned another surprising thing, to me anyway, which is that Macklemore’s white. (Rap Genius: http://rapgenius.com/Macklemore-and-ryan-lewis-same-love-lyrics#note-915835). The song is called “Same Love” and there’s a video interview of him explaining the song. Though the song is pretty self-explanatory.

ctan: That was when their greatest hits collection came out, but most of the LPs are from the eighties. Plus in 2006 all their records came back into print. They have a website now with lots of videos and an e-store: http://www.romanovskyandphillips.com/store.htm

Daron: Aha, I see their greatest hits include:
-Don’t Use Your Penis (For a Brain)
-The Sodomy Song
-When Heterosexism Strikes
and
-She Has a Thing (For Men Who Love Men)

Daron: You do realize that this is my greatest fear, though, don’t you?

Daron: That if I get tagged as “gay” in the music business I’ll be reduced to singing parody songs about the lifestyle at pride parades.

ctan: Wait, “reduced to”? Didn’t you say you’d be grateful for any chance to make a living with music?

Daron: No. I respect people who can make a living at music no matter how they do it, whether they play in a wedding cover band or teach lessons or do parodies. But when I say “reduced to” I guess what I mean is “forced to” do something that just isn’t me. If the whole point of going into music was for the sake of self-expression on my part, and instead I’m reduced to faking something I’d hate… you get the point.

ctan: And you really fear that’s what would happen?

Daron: I didn’t say it was a RATIONAL fear.

Daron: I could be completely wrong. Finding an audience who embrace you and love you counts for a lot. But imagine you’re a chef. Your dream is to open a fancy restaurant and be creative and invent recipes, etc. But say you’re Chinese, and people tell you you should open a Chinese restaurant instead. Or you’re Italian and people tell you you should run a pizzeria. They might be very very lucrative businesses. But you’d be pigeon-holed. Is it worth it? Nobody wants to be pigeon-holed, least of all me.

ctan: And yet that’s the music industry’s job. That’s what they do. Categorize and package what’s expected.

Daron: Exactly. But I guess you could say I’m more afraid of artistic death than of actual death. At this point, I’m not worried someone’s going to try to kill me because I’m gay.

ctan: Even though you almost lost an eye.

ctan: And that incident is what got Ziggy hooked on painkillers, too.

Daron: … True. Okay, fine, there’s plenty of malice in the world going to be aimed at me for being gay. But I accept that. I’ll deal with it as necessary. But I can’t live in fear for my life. If anything, now I worry more about other people.

Daron: Well, suicide is one thing, domestic violence another. Then there’s messed up stuff like the woman recently who killed her four year old son for “acting gay.”

ctan: I’ve got friends who still find it unbelievable that people “disown” their kids for coming out. I think they believe that in time the freaked out parent will always “come around” like something from a family movie of the week.

Daron: That’s because they are caring, privileged people who have trouble imagining that someone can be so heartless to see ALL gays as not human, even their own flesh and blood.

ctan: Do you think your mother thinks you’re not human?

Daron: Let’s not talk about my mother. Let’s talk about Steve Grand, the gay country singer who did that YouTube video, All-American Boy? His Kickstarter wrapped up last week with 4,905 backers and over $326,000. Only two music projects on Kickstarter have been bigger: Amanda Palmer’s and one other.

ctan: That’s cool. But I wonder how many he’s actually going to sell?

Daron: Does it matter? I mean, if he’s raised the dough and 5,000 people get the album, isn’t that better than if he sold a hundred thousand records but was broke or in debt at the end of it?

ctan: You tell me. You’re the one who nearly fell over when you saw that gold record for Candlelight.

Daron: True. But you’ve read the classic Steve Albini rant from Maximum Rock n Roll about how a band who signs with a major label is fucked financially?

ctan: Yeah. It’s called “The Problem With Music” and you can currently read it on the Negativland website here: http://www.negativland.com/news/?page_id=17. The tl;dr is a spreadsheet showing how a typical band who sells 250,000 albums ends up making nothing and in debt to the record company. (Meanwhile the record company has raked in $710,000 in profits.)

Daron: Only two things protected M3 from that fate when we signed with BNC. One, we had signed first with an indie label who were actually decent to us contractually, which reduced the amount of fuckage somewhat. Two, we broke MUCH bigger on the road than what Albini is talking about.

ctan: And yet you ended up unrecoupable anyway.

Daron: Yes. But that brings me back to what we were just talking about: the difference between making money to live off and having creative freedom.

ctan: But but but… when you sign with a major pigeon-holing label, you don’t have creative freedom really.

Daron: I know. I KNOW. The dream is to do what you love, to make the music you were put on Earth to make, but to manage to build the commerce around it that you need to to survive financially, too. In the old days, there weren’t too many ways to do that. Now, you can potentially be a YouTube star, and fund your efforts through your fans. It’s something!

ctan: I guess the real question is will something evolve where a major chain like Target will buy copies of All American Boy and give it that “mainstream” validation, or if so many YouTube views will add up to Billboard chart position and radio play?

ctan: I mean, 50 Shades of Gray was kind of that in publishing. It was first done by a small press, but word spread through the Internet, increasing the demand and buzz to the point where one of the Big Six publishers bought the rights to do a re-release and that one sold 300 million copies.

Daron: If you sell 300 million albums, I think you get out of the situation that Steve Albini describes. I hope if Steve Grand gets approached by a major label that he has someone who can play hardball and keep the financial exploitation to a minimum.

ctan: I hope he keeps making good music. Will he feel pigeon-holed in five years? Ten? As a “gay” singer? Isn’t that what you objected to?

Daron: Gooood question, and kind of. Seems to me Steve Grand has decided to grab that as his identity, Gay Country Singer. We’re back to music is a form of self-expression, and Grand has taken “coming out” to a whole ‘nother level! Coming out and establishing his public persona were the same thing and IT WORKS. I don’t think I could have done that.

ctan: So what defines you, artistically?

Daron: I can’t put it in words. It’s in the notes. It’s in the playing. That’s why I fail. Mills was right about that. I’m not easy to package. Not easy to define. I’ll live with that. All any artist can hope for is to find an appreciative audience for what you want to do and enough lucre to make life work.

ctan: Agreed. So, hey, thanks again to all readers and supporters of DGC. I know the Kickstarter is a big deal and is all about money, but if you don’t have cash, there are so many ways you support what we do here:
-leaving comments on posts (we love love love comments!)
-voting for us every week on Top Web Fiction (click)
-telling your friends about us
-reviewing the ebooks on Amazon and Goodreads
-reviewing the audiobooks on Audible

Thank you everyone for all you do