ctan here! I’m sneaking a liner note in on a Friday because there WILL BE a Saturday story post tomorrow thanks to the amazing day today that the Kickstarter had… the day on which we REACHED GOAL! Yeah!

As I write this the total is up to $3,524, so if no one downgrades their pledge before the campaign ends in seven days, we’re guaranteed to get the money! Now we have our sights set on some stretch goals, detailed below.

Today Daron and I also have other cool stuff to share with you, including the videos of last night’s live chat, fan art, and more, all under the cut!

First of all, part one of last night’s live video chat.
In which I answer the questions…

• Why is Daron such an introvert?
• Why do you write so much about gay men?
• Do you think you’re as good at writing as Daron is at guitar?
• Who is Daron’s favorite author?
• Is the music industry as messed up now as it was in 1989?

One person also asked “If you made a mixtape that was supposed to give the idea of what Moondog Three would sound like, what would be on it?”

Here’s the playlist I made on YouTube of those songs!

In the second video I also answer the questions…
• What do you miss about the Eighties?
• How long will DGC go on?
• Will there be more audiobooks?
• If you could cross Daron and the guys over with any other universe, what would it be?

When I started the chat we were a mere thirty dollars from reaching the minimum goal of $3,500 in the Kickstarter, and about twenty minutes after the chat ended, a $30 donation came in! (And then another one for $24 after that!) So here’s how it stands as I write this tonight: 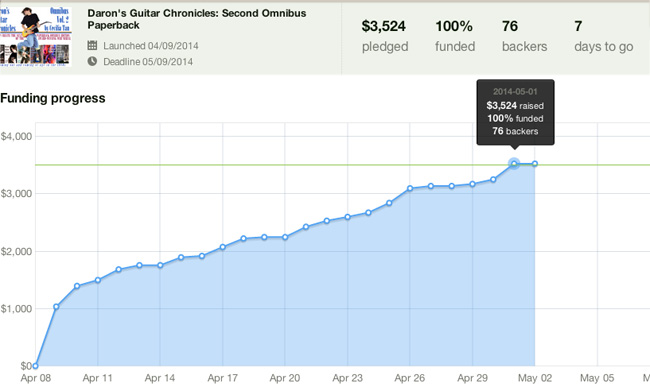 PAYPAL PAYMENTS:
Okay, so as I promised earlier, if we made the minimum goal through the Kickstarter site, I’d also start counting donations received through Paypal into the stretch goal totals. We’ve already got one donation from Chris S., as well some of the weekly or monthly supporter auto-payments, so $38.50 is already in that kitty to be summed up!

So for those of you who can’t use Kickstarter or Amazon payments (their processor) for some reason, you can still chip in with the button below!

You can choose what amount to give and comment via Paypal which Kickstarter reward level you want. (View the Kickstarter to see what you get for a given level of donation: http://kck.st/R31kCx).

ADD-ONS
And remember, if you decide you want to customize your reward package to add an additional T-shirt, omnibus book 1, or omnibus book 2, just INCREASE your pledge amount above the reward level amount given as follows:

STRETCH GOALS:
So here are the stretch goals we laid out at the start of the campaign:

If we reach $4,500, the reward we’ll unlock is a 2-hour online chat with Daron for all donors! What I’ll do with the money is publish paperback editions of the individual DGC ebooks, volumes 1-3. I need to buy new cover art for book 1, and although I have rudimentary PDFs already made for the ebook editions, they need proofreading and some additional work to make them print-ready.

If we hit $5,000, I’ll invest in paperback editions of DGC volumes 4 and 5, add two MORE pages of “scrapbook” to this omnibus, and the reward we’ll unlock will be a historical timeline of DGC, possibly done as a two-page spread in the omnibus, and provided as a PDF for those getting digital rewards. Depending on what will fit, the timeline might go back as far as when Digger and Claire met, or it might concentrate on the 1980s, and it might include dates of historical interest as well.

If we hit $5,500, I’ll invest in website improvements for Daron’s Guitar Chronicles, hiring someone to update my out of date WordPress and fix my broken plugins. And the reward we’ll unlock will be because you’re all truly rock stars: “ALL ACCESS” band and road crew passes for all donors at the $25 and above level, while those of you getting digital only packages will get a PDF of the pass you can print and laminate yourself. 🙂

Actually, as I said in the chat, if we pass $5,000 at all I believe the money works out that I can give everyone the backstage passes! So I will!

So, share the link to the Kickstarter, and if you haven’t chipped in yet, even a dollar or two will get you “Daron’s Night Out” as a reward: http://kck.st/R31kCx

Daron: Your ukelele is the cutest thing I’ve ever seen. It’s like… if my guitar had a kitten.

ctan: I know. Did you see the thing I talked about in the chat though? The Ovation factory in Connecticut is closing.

Daron: I’d say that was heartbreaking, except on the scale of actually having my heart broken it’s not quite up there. But painful to contemplate. Ouch.

The Ovation guitar factory in New Hartford, Conn. — the only U.S. plant that currently makes the iconic guitars — will close in June, its parent company Fender announced Wednesday.

Ovation guitars have been built there since 1967 after Charles Kaman, an aviation pioneer credited with many advances in helicopters, developed his first guitar. “Charlie Kaman … worked to get vibration out of spruce helicopter blades. When he branched into guitars, he used that experience to put vibration into guitar tops,” said Brad Durasa, of Algonac, Mich., who owns five Ovations. “The Ovation company was at the leading edge of design and research in how to make a better, modern guitar.”

“Everyone was using them. They used to come pick them up at the factory,” says Alison Swan, owner of The Canterbury String shop in Hot Springs, S.D., and a former employee at the plant. “We were all hoping that Mick would come.”

Daron: You’re telling me Ovation was born the same year we were.

Daron: Okay, maybe my heart is broken a little.

ctan: They’ll still be making them in Korea and China, you know.

Daron: All right. Thank goodness. Now how about that fan art? Amy did it for your birthday. Here: 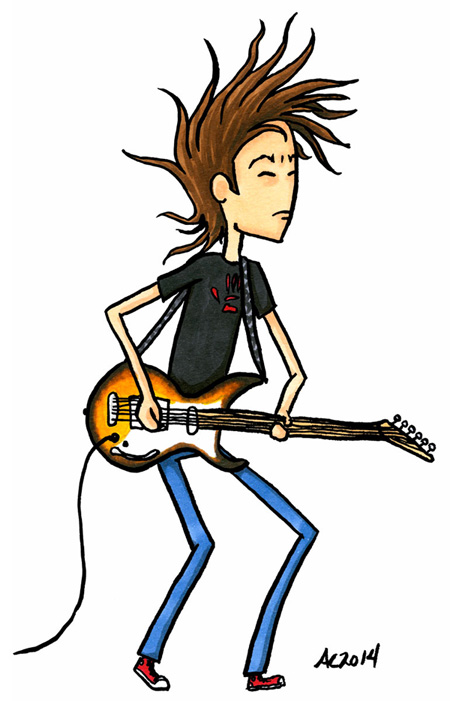 Daron: Two of the guys in Instigator got concussions once when they literally banged heads. I once forgot I was wearing the remote mic and flung it off of me.

ctan: So here’s something totally fucking brilliant. An artist named Harvezt on Flickr posts well-known album covers side by side with their imagined “back view”. I first found this at a slide show on Fast. Co. Design: http://www.fastcodesign.com/3028869/go-literally-behind-your-favorite-album-covers#1. But there are even more of them in the Flickr album here: https://www.flickr.com/photos/93699963%40N04/with/8520312516/

Daron: OMG the Springsteen one is hilarious. And Kraftwerk. This is genius. Wow. 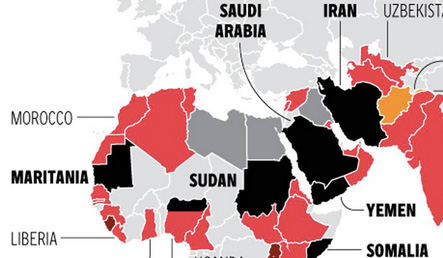 Daron: Every country there marked in black has the death penalty if you’re gay. DEATH PENALTY. It’s a piece of a full world map posted at Policy Mic “Stunning Map Pinpoints The Worst Places in the World to Be Gay.”

Daron: I know I talk shit about New Jersey and growing up in the suburbs but holy mother of God I feel blessed I was born there and not some of the other places I could have been.

Daron: Digger used to, sometimes. Picked it up from him.

ctan: We’re both really lucky to make a living from creative arts.

Daron: Yeah. I think we better leave off for now. Leave people with that thought. I’m glad to be part of this world where freedom of creative expression is at least possible, if not universally valued.

ctan: It doesn’t have to be universally valued, so long as the people who value it support us. Which they do. And we value them back.

Daron: We do. Enjoy tomorrow’s post, and remember to tell everyone you know about the Kickstarter!