ctan: I think we’re overdue for a liner note, aren’t we?

ctan: Point. Well, let’s do one anyway. I didn’t want to interrupt either your angstfest or your lovefest for one.

ctan: I sent links to everyone who got ebooks and digital rewards. And I’ve now collected most of the physical rewards except for the T-shirts and the books themselves. We’ve got the laminated backstage passes. Here’s a preview of the book cover: 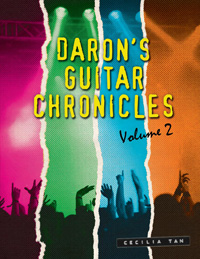 Daron: That explains what Ziggy was doing with those stuffed animals. And why he was chuckling to himself so much.

Daron: Good. I was a little worried it was some new fetish he had picked up. Did we miss wishing everyone Happy Pride?

Daron: In any case, Happy Pride everyone. It’s convenient that the Stonewall Riots happened in June so we can have nice weather for all the parades and festivals.

ctan: If it had happened in the winter I wonder if we wouldn’t have parades. We’d have something else.

ctan: Um, maybe. The first Pride Parade I marched in was at Brown, and it was during Pride Week. The LGSA would erect a pink triangle on the college green, and we’d have to guard it round the clock to keep homophobes from vandalizing it. The northeast gay and lesbian Student Union had its conference at Brown during my freshman year. On my freshman hall, our head Resident Counselor was openly gay, and one of the assistant RCs was, also. He gave the okay for some of the visiting students to sleep in our lounge, just like he did for the Princeton Marching Band and other groups, and people went ballistic. We had to have a huge meeting of everyone on our floor where people demanded to know why he hadn’t taken a vote on whether “those people” should be allowed to sleep there. It got very heated. The result was that all of us had to come out. Out of the 50 people who lived on that hall, there were 6 of us, and we basically told the rest of them, hey, if you’re afraid you’re going to get cooties from gay people, it’s too late. You’ve been living with us all year.

Daron: Wow. Don’t call it cooties, though. It was AIDS they were afraid of.

ctan: Yeah. This was April 1986. But I kind of wonder even if there wasn’t HIV to worry about if they wouldn’t have freaked out anyway. But yeah, that made marching with a thousand student activists around the campus a pretty important statement. First time I chanted “We’re here, we’re queer, get used to it.”

Daron: Jeez. I never thought of it as that… personal. But you had people in your building flipping out.

ctan: People I’d been living with and eating dinner with every day since September. Smart, articulate kids–it was the Ivy League after all. But ugh.

Daron: I saw in the news one of the instigators of Stonewall died at 93 years old. Drag king Storme Delavarie. Check out the obituary in The Advocate.

ctan: Wow. As messed up as stuff is in the world right now, I at least feel like gay rights is a hell of a lot better off now than ten, twenty, or thirty years ago. How about the music industry, though? Better or worse?

Daron: I’d say generally for musicians it’s better now, but it’s worse for a lot of people. It depends. It’s changed a lot for the better in terms of diversity of musical styles and there are ways to reach fans now without a record company controlling everything.

ctan: Check out this article I found about a somewhat Carynne-like woman, Vicky Hamilton. Link: Wikipedia

Daron: Wow. It’s still a male-dominated industry but it’s not quite as terrible as it was. Hey, have we done a liner note since the Kickstarter chat?

Daron: Then people need to see the YouTube playlist we made of Moondog Three musical comparisons.

ctan: You’re right! Here you go folks: a list of 12 songs that all cluster around the Moondog Three sound somewhat.

Daron: I also wanted to try to give people an inkling of what Ziggy’s voice sounds like. He’s a tenor legere. They’re rare, and since the “grunge” era have gotten even rarer in rock. So I only have 5 songs on the list:

ctan: Speaking of activists who made a difference, and also changes in the music industry, did you see the Tibetan monks breakdancing tribute to the late Beastie Boy, Adam Yauch, aka MCA?

“Unconventional promotion for MCA-DAY-an annual tribute to musician & humanitarian, Adam “MCA” Yauch of the Beastie Boys. MCA was a devout Buddhist who fought for Tibetan independence.”

Daron: That is so random and wonderful. Which I guess is what the Beastie Boys were about. Speaking of random, you should post the photo of corwin’s band you know.

ctan: Right! Here they are, Platypus Rex, playing a reunion gig after 7 years apart! They sounded pretty good, too. And look what T-shirt corwin is wearing: 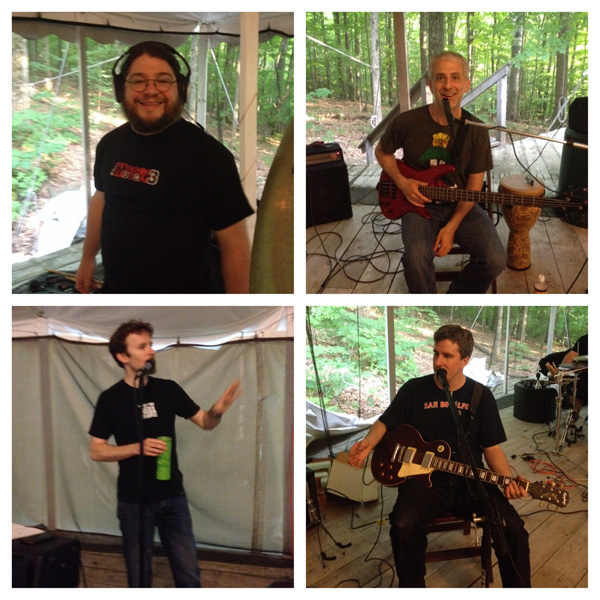 ctan: I caught the first song of the reunion, “New Taco Girl,” on video:

Daron: That is a great song. Jeff is really a great songwriter. Clever and catchy. What more could you want.

ctan: Any closing thoughts for tonight?

Daron: Be kind to each other. Be kind to the world around you. I know I’m supposed to do the angry young man thing, but you know, Nelson Mandela may have had it right when he said hate isn’t something people are born with, they’re taught it. That means we can teach love, too. So let’s do that.

ctan: Well, I’ve always said DGC is a love story. Thanks, everyone, for all the love.