So the big thing that happened at dinner was not that Courtney embarrassed the hell out of me, though she did.

We were seated at a long banquet table, in a private dining room with a private Christmas tree. (Though I think it was a coincidence that all the ornaments were musical instruments, singing angels, lyres, or notes.) I was at one end of the table with Martin and Courtney and Matthew and Archie. In the middle were Alan and his wife with their son Ryan, and Alex and his wife. At the other end were Remo and Melissa and Artie and his wife.

Courtney turned to Alex’s wife at one point and said, “So, Daron doesn’t remember your name.”

She laughed. She was a pretty woman with long auburn hair and long, elegant fingernails. “Well, we did only meet once before this, and that was a pretty… traumatic night all told.”

“That was the night Digger showed up uninvited, got drunk, fought with Remo, ran into the end of the pool table, and then an ambulance took him away,” I explained, as if to prove my memory was good for something.

“And we really didn’t get to talk,” she said, and reached her hand toward me. I took it just as she said, “My name’s Claire.”

Okay, so, yeah, you’d think I would have remembered that. I’m sure my face turned bright red. “Nice to meet you again, Claire. Um. Sorry about that. Will you help me out and remind me what your sister-in-law’s name is, too?”

“Hey, Grace, Daron wants to know what your name is,” she said, and then she and Courtney started laughing.

Grace was a dark-haired woman with fair skin, Black Irish. She turned from wiping Ryan’s hands on a cloth napkin to shake mine. “Daron. I’m Grace. I’m so sorry I didn’t remind you of that earlier in the week. You must have been really uncomfortable not knowing my name.”

“I kept hoping I’d hear somebody say it and think ‘of course! I knew it was that!’ But I never did.” I felt the need to defend myself from Courtney’s earlier insinuation that it was sexism. “If it makes you feel better, I couldn’t remember Archie’s name either.”

That set Matthew and Archie to laughing, then, too.

“So I think I’m just bad with the names of the significant others of people I know,” I said.

Archie patted my hand. “It’s okay. I couldn’t remember your name either. I think I misheard it the first time and I thought your name was Baron.”

“He was supposed to be named Baron,” came Remo’s voice booming down the table.

“Yeah. That’s what your dad wanted, but your mother said no, it was a good name for a German Shepherd or a Golden Retriever. They compromised on Daron instead.”

“Our parents compromised on something?” Courtney said in shock. “What name would you have picked?”

“Baron would’ve been okay,” Remo said. He had been drinking and his midwestern drawl was especially thick. “But Daron’s better.”

At that moment a waiter came in and looked at Remo, who made a “yes” gesture, and then two more waiters bearing champagne bottles and a tray of tall glass flutes came in. Apparently we were having champagne.

I understood a little better when Remo stood up and raised his glass. Right. A toast. A Christmas toast.

He was about as dressed up as I’d ever seen him, in a sharply tailored jacket and dress shirt, though he kept the shirt unbuttoned at the collar. Somehow on Remo that looked rugged rather than slovenly.

He urged Melissa to stand up with him and then said, “I want to thank you all for being here, for coming to celebrate the holidays with me, but especially so you could be here for this special moment. Merry Christmas.”

Everyone said Merry Christmas and clinked glasses together. I took a token sip, reminding myself of my resolution to take a night off drinking. I think Melissa did the same because she put down what looked like a full glass on the table.

And then Remo got down on one knee. “Melissa Ann Zanetti would you… ah dammit wait a second.” He struggled to get the ring box out of his pocket.

“Shoulda rehearsed,” Alan said, and cracked everyone up.

Remo cleared his throat. “Take two.” He held up the little velvet box. “Melissa, would you be my wife?”

She put her hands over her mouth, tears springing into her eyes. Then she grabbed the box with one hand and slapped him in the face with the other. “That’s for making me cry in front of everyone!” Then she opened the box, sucked in a breath, and burst into full-on tears.

Okay, I never really understood the whole hetero marriage proposal thing because obviously I knew that wasn’t really for me, but I knew roughly how it was supposed to work. You’re supposed to save up a certain percentage of your salary for the diamond, right? And it’s supposed to be super special. And I can see how since so many people all over the world invest so much emotion in it, that makes it meaningful.

But I could see the diamond shining all the way from my end of the table so I think it was probably a real stunner.

She looked at it for a long moment while she got her voice back and took deep breaths. And then she looked down at Remo, who was still on one knee and looking kind of apprehensive about the whole thing. She said, “Well, in spite of the emotional ambush and the peer pressure of asking me in front of all these people….yes. Yes, Remo Cutler, I will marry you.”

And he jumped up and kissed her and then put the ring on her finger, and a brief argument ensued because it was too big for her ring finger and he said the jeweler had said to bring it back for sizing if needed, but she said she was damned if she was going to go another minute without that ring on her finger, even if she had to wear it on her middle finger. Which she did.

They were both glowing and happy and dessert was served and I noticed Matthew and Archie were holding hands on top of the table. They were wearing matching rings.

I didn’t ask them about the rings. I just wanted to feel happy. It was Christmas Eve and it was supposed to be a happy occasion. And I was happy for them, for all the “happy couples” there.

But when I went back to my room, sober and alone, happy is not what I was feeling.

(Here’s another example of an artist from the 1980s who was so homogenized and packaged by 1990 that even this song which charted in the Top 40 is utterly forgettable. -d)
— 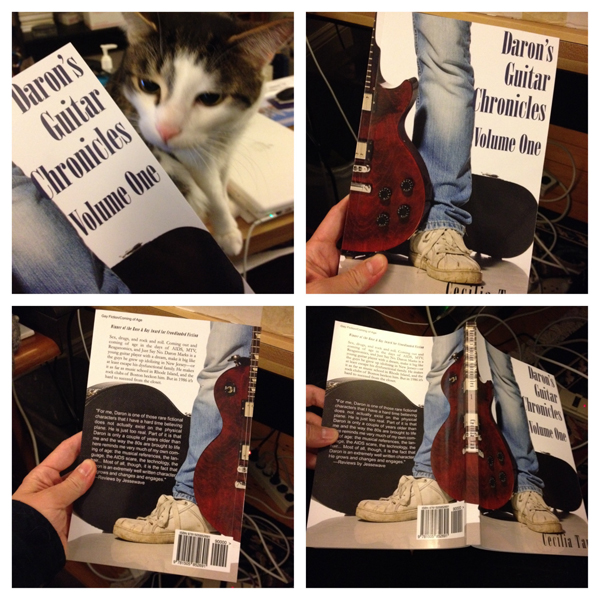 Site news! The paperback edition of book one of Daron’s Guitar Chronicles is now available! Order it now from Createspace, the supplier I get the largest royalties from: https://www.createspace.com/5209857 (or from Amazon who I get an extra kickback from if you use THIS LINK