Daron: Okay, we failed to post a liner note in February. In our defense, it was a short month.

ctan: And then we failed to post a liner note in March, too. In my defense, I’ve been busy writing a novel. Where were you?

Daron: On the road, of course. But we have lots of cool links and things to share this month.

ctan: First, most important thing, if you didn’t see it earlier, I polled readers recently about what we should do this summer with DGC. Basically, I’m going to be writing not just one novel this summer, but two, in addition to DGC, and to accomplish that I need to cut back on DGC somewhat. I gave folks the choice of 2 months of total hiatus or 4 months of one post a week. Folks voted overwhelmingly in favor of once a week, and hatched the idea that if I post new content on Tuesdays, fans could post in the Thursday slot!

Daron: Uh, update, apparently the fabulous Amanda is going to help with posting the Thursday posts.

Here’s the schedule of posts we’ve got so far:

Daron: No one likes to turn down gigs. Ever. But even you can’t be in two places at once.

ctan: Exactly. I can only write so many words per week, even though I can juggle several writing projects at the same time. I do hit a limit.

Daron: Another thing we have been wanting to get going for the fandom is the forums. We installed them 7-8 months ago but it took some configuring. Here’s the deal, though:

The Forum has two sections:
DGC Discussion: for fans only, ctan and daron will stay out
Off-Topic: the forum for things only tangentially related to DGC

You go and type in a name and your email address and WordPress will email you a password.

Once you are logged in to daron.ceciliatan.com you are automatically assigned “subscriber” level permissions. Subscribers have the ability to post to the forum, create new topics, reply, etc. Visit the main forum directory to get going: https://daron.ceciliatan.com/forums/

Or test out whether you can reply to this thread on videos/songs from the 1980s or 1990s: https://daron.ceciliatan.com/forums/topic/suggest-videos-from-the-1980s-1990

ctan: If anyone wants to volunteer to moderate the forums, let me know.

Daron: Do you have to be moderate in order to moderate?

ctan: Preferably. OK. So what do you think about the new Adam Lambert song.

ctan: That’s what you think?

ctan: You have a one-track mind.

Daron: A song about fame and heartbreak in the soullessness of Hollywood doesn’t remind you of Ziggy???

Daron: In other news, it’s been a really rough time recently for touring musicians. Did you read about the heavy metal dude who fell out of the tour bus thinking he was opening the door to the john? Here: The Telegraph.

ctan: All I can think is…the doors open from the inside? While the bus is moving?

Daron: I don’t know what model of bus it was. On most of ours the driver would have to open the door for you. This one sounded like maybe it had a back door? I don’t know. And then there’s Twin Shadow, whose bus collided with a tractor trailer, and…in a weird coincidence, the bus of another band (Thompson Square) but who weren’t in the bus at the time. From USA Today.

ctan: I hope the bus driver is all right. It says firefighters had to cut him out of the bus.

Daron: You mean they cut the bus to get him out when you say that, right?

Daron: Then there’s poor Kirk Hammett of Metallica, who apparently lost his iPhone which had 250 riffs he’d recorded for the upcoming album.

ctan: Jeez. Back up your files, kids. I bet AC/DC’s drummer is having a worse time than Hammett, though.

Daron: He lost his phone?

ctan: More like his mind. After Phil Rudd’s solo album tanked, he tried to hire a hit man to kill his assistant. And then the police found a lot of drugs in his house… and then he plead guilty to the charges? And…see if you can make sense of it in Rolling Stone.

ctan: You do seem sort of down.

ctan: Here, maybe this will make you feel better. It’s a 1985 photo of Steven Tyler and Joe Perry from a Japanese magazine that Joe Perry tweeted. 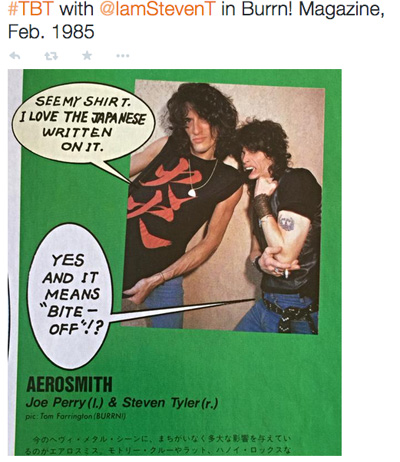 ctan: Rabidly heterosexual by all accounts. Yet I’d say the word “bent” may apply. Then there’s this:

Daron: Hozier–isn’t he the guy who just took a stand on marriage equality in Ireland? I confess I know even less about him than I know about Sergei Polunin.

ctan: How do you know about Sergei Polunin?

Daron: Just look at him. Plus, you know, I have a professional interest in gorgeous and insanely talented megalomaniacal men who rocket to fame at an early age. *coughs*

ctan: You really have Ziggy on the brain today.

Daron: I do. You want to hear the most beautiful sad song ever? Here:

ctan: Wow. Jeez, now I’m in a melancholy mood, too.

Daron: Then you’re ready to read this. Here’s a strange but fascinating story, of Mingering Mike, The Soul Legend Who Never Existed: The Guardian.

ctan: I want to say something profound about how pop music shapes our lives…

Daron: But you always say that. Now nerd out with me please, in honor of the new Star Wars trailer: Millennium Falcon Guitar.

ctan: Do you want one?

Daron: No. But I wouldn’t mine playing one in a video.

ctan: What did you think of the trailer?

Daron: I think I’m such a cynic I should keep my mouth shut. Insert “A New Hope” joke here.

ctan: I think they basically just proved they can make a 2-minute long thing that makes the whole fandom go nuts in a good way. The question is, can they make a 2-hour long thing that can do that? I was very unimpressed with Star Trek: Into Darkness for a lot of reasons: terrible logic holes in the plot, overdoing the “fan service” to the point the story made no sense, uselessly shoe-horning the Khan backstory into what could otherwise have been an interesting villain… yeah, just overdoing it all around. I’m glad I waited until it came to streaming. Speaking of science fiction, one of the best rock and roll novels of all time, Lew Shiner’s Glimpses is back in print.

Daron: And speaking of streaming, that was the other weird music industry news of recent days. Somehow Jay Z and Madonna and Rihanna and a bunch of other huge huge artists all banded together to start a new streaming service, Tidal? As Gawker pointed out they “think you are willing to pay double the price of other streaming music services to pay for their streaming music service, because they are crazy…. It’s more expensive because it’s “higher quality” and “artist-owned,” which is important because Usher, Daft Punk, and Madonna have been living in wretched penury for far too long, and it’s time for people to give back. ”

ctan: They do seem kind of out of touch…

Daron: I think it’s typical big industry hype. Even thought Tidal is so-called “artist owned” this is pure big biz hype. And Jay Z could buy and sell some whole record companies himself, so it’s a little hard to see Tidal as the little streaming service that could. I’d go back to Beats Music before trying Tidal.

ctan: I’ve gotten pretty attached to Pandora, even if the ads are starting to get ridiculous. Maybe I should start paying for it. They even played Boiled in Lead the other night! Not this song but here:

Daron: Wait, wait, wait, I just realized. We can’t talk about Adam Lambert without mentioning our other other favorite out gay singer, Steve Grand, whose Kickstarted album is finally out. Here he is in The Washington Blade.

ctan: I found some of the songs on the album kind of bland, but I like Steve, anyway. That song is fun, though. Have you noticed it sounds a little like a song that came out when I was two years old?