Okay, it’s been a million years since we did a liner note, and ctan’s too fucking busy, so I’m doing one anyway. Cool?

MEET UP
ctan herself was just in California and got together with some readers out there in some kind of, like, zen garden tea place. (In Berkeley of course.) Where do you guys want to have the next meetup? If you start planning now, it could happen.

A COOL THING YOU SHOULD KNOW ABOUT
A longtime reader of DGC is running her own web serial called WELCOME TO PHU and is doing a Kickstarter right now for a book of it, COMMIT TO THE KICK: https://www.kickstarter.com/projects/tryslora/commit-to-the-kick-book-1-of-the-twinned-trilogy?ref=hero_thanks

The Web Fiction Guide describes it as: “Welcome to PHU is a web serial about the students who go to the fictional liberal arts school of Pine Hills University, and the folks around them. It’s about magic, and love, and football, and music, and taekwondo, and just about anything else that college students might get involved in. And magic. Did we mention the magic?”

So go check it out. THE PHU KICKSTARTER HAS 11 DAYS LEFT so get on it, eh?

ENTERTAINMENT BIZ STORY #1:
Sometimes it’s not what you know, it’s who.

I thought I’d share this tweet video I saw where Will Smith tells the story of how he became the “Fresh Prince of Bel Air” after having a Top 40 rap hit and almost going broke afterward:

Will Smith tells the story of how he landed The Fresh Prince of Bel-Air pic.twitter.com/5ieV3p41uw

Here’s the actual video which doesn’t seem to be linked from the Tweet anymore:

A couple of things jumped out at me about the story. One, how important it is to have someone manage your money if you are the type of artist who would forget to pay his taxes. Two, fucking Hollywood, man. Of course, crazy shit like that happens in New York, too. It’s not the place, it’s the entertainment industry.

And in particular the thing about the entertainment industry is that it’s run by human beings, and humans are capable of some really wacky shit. Especially humans who’ve decided not to be “normal” people. A lot of people in the biz think of “normal” people as the people in the audience, and themselves as “not that.”

Show biz is very much about getting stuff done–often stuff that has never been done before. Or if it has been done, it’s been done a different way. Humans are excited by new things, new spectacles, new twists.

Which might explain this article a reader sent in recently, about the most ridiculous on-stage mishap to happen to Genesis back in the days when Peter Gabriel was still their lead singer.

ENTERTAINMENT BIZ STORY #2
I think most stage mishaps can be chalked up to “human error.”

In a recent article that a reader sent us, Genesis tour manager Regis Boff describes, first of all, Peter Gabriel’s outfit:

“A standard early-to-mid-70s Genesis show finished with Peter Gabriel dressed in his “Magog” outfit: a long velvet black cape and a giant triangular headpiece. Towards the climax of the show, Peter would throw off his hat and cape to reveal himself in a silver jumpsuit.”

Now, if you’ve seen Peter Gabriel any time in the past 20 years you’ll know that he really doesn’t do costumes. Maybe this is why?

Then Boff describes a stage effect that is going to sound very familiar to you readers of DGC:

“We made him momentarily invisible by detonating controlled explosions that came from metal pods at the front of the stage. The audience was blinded and dazed so it made for an excellent finish. We filled these canisters with a martini of flash and gunpowder that would be criminally outlawed today, whereas back then it was quietly banned. We never told anyone we were going to do it. One of our roadies filled them a couple of hours before the show and set them off just at the right moment.”

Uh-huh. Fortunately for Peter, the mishap described in this story didn’t result in a burned eye–unlike some unlucky bastards we know…

“Someone had the inspiration to “fly” Peter into the air while the audience was blinded (it was most likely Peter himself). He’d be hoisted fifteen feet into the air by nearly invisible thin metal wires and finish the song floating in a silver jumpsuit, as the curtain closed. End of show. Nice.”

So the question was, how to do that? Like I said, people in show biz are about getting things done. There’s always a way.

“I brought in an “expert” who had flown Elton John and his piano into the air a few months earlier. This guy would harness himself to the wires connected to Gabriel via a truss. Then he’d climb to the top of a tall ladder on stage left out of sight and wait. On my cue, he would leap off the ladder and, because he was the counterbalance, up Gabriel would go.”

Let me get this right. So your lead singer and some guy are literally wired together, and to create the effect this guy is just going to jump off a fifteen foot tall ladder. Every night. Got it.

And for whatever reason, the guy can’t take a musical cue, so the tour manager had to be the one to tell him when to jump.

“I did the cueing because I had no other real job,” Boff wrote, “I sweated the cue because if I got it wrong, Peter would be mid-song and everything else would fall to shit.”

Which of course is what happened. One night Boff jumped the gun and the stunt man jumped too early.

“All hell broke loose. Peter went up quickly and crookedly. His left shoulder was at least a foot and a half higher than his right. In his surprise, he dropped his microphone, launching it forward onto the stage, where it rolled into the explosions from the gunpowder pods, which sent the blast sound directly into the … speakers.”

“Tony Banks, the keyboardist, was in the center of the stage hitting Geoff Banks, the explosion roadie (no relation), over the head with a tambourine, screaming “I am deaf! You made me deaf!”

Moral of the story? I’m going to go with don’t use illegal explosives as the number one takeaway, but maybe I’m biased. Just as important is probably don’t have anything that relies on a cue in a musical show handled by someone who can’t take a musical cue. Maybe I’m biased there, too.

You can read the whole article on Culture Sonar: http://www.culturesonar.com/genesis-embarrassing-performance/

BUT… that brings me to…

ENTERTAINMENT BIZ STORY #3:
We all know managers aren’t always what they’re cracked up to be. Some people have occasionally commented to me that Digger seems outlandishly farfetched. Was my dad really that bad or am I exaggerating? Well, have you looked at some of the folks managing rock stars in Hollywood these days? Check out Sam Lufti, for example. This is the guy who used to manage Britney Spears and against whom she ended up taking out a restraining order to get him to leave her alone after she’d fired him. He moved on to Courtney Love.

Courtney Love and Kurt Cobain had a daughter, Frances Bean, who grew up and got married to (and then divorced from) a guy named Isaiah Silva. Silva is currently suing them for stalking him and allegedly kidnapping him — actually it was Sam Lufti and two other guys who did the kidnapping — and the only reason they didn’t get away with it is that he wasn’t alone at the time and a friend of his blocked the road until the LAPD could get there. SPIN has the full court records and police reports here: https://www.spin.com/2018/06/5-things-frances-bean-cobain-exhusband-lawsuit-isaiah-silva/

I know, check it out, I found a manager even worse than Digger!

MUSIC GEEKERY #1
Of course it wouldn’t be a liner note from me if there wasn’t some music geekery. Bart insisted I share this with you about how Tina Weymouth of Talking Heads is a genius bass player and highly underrated. The article is at Open Culture:
http://www.openculture.com/2018/07/genius-tina-weymouth-breaking-style-talking-heads-tom-tom-clubs-basslines.html

And here’s the main video featured in it:

MUSIC GEEKERY #2
ctan and corwin went to meet Thomas Dolby recently and see him do a special concert that was basically a lecture where he explained how he built 6 of his songs (plus a seventh for the encore) and performed them with various video accompaniments.

If you want a taste of what that lecture was like, Dolby did an abridged version live for the launch of Roland Cloud (Roland is a synth manufacturer, you might recall):

He’s got a book out now, a memoir, which I recommend! The first half is basically his rise and fall in the 1980s music business and the second half is the rise and fall of his time in Silicon Valley heading a music software startup company. Dolby had just as great and awful a time as we did in the ’80s and he’s a good writer, too.

Look at these nerds. Gotta love ’em. (ctan, corwin, and Thomas Dolby below) 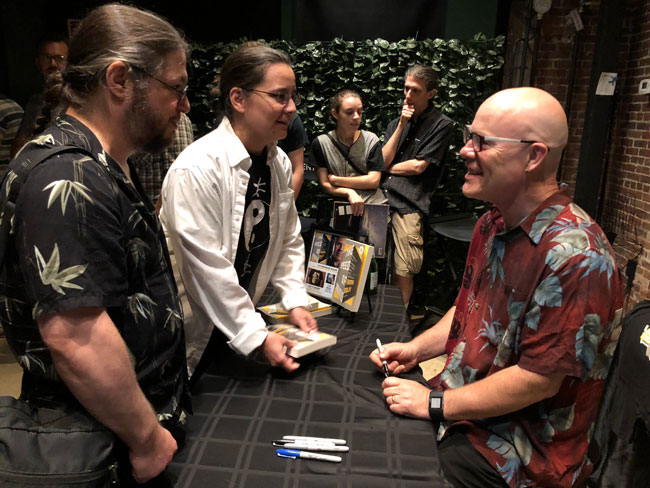 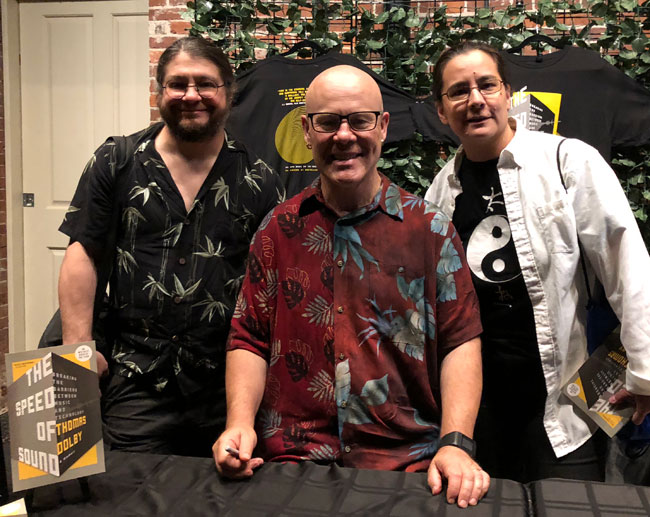 While we’re at it, back in October those jetsetters ctan and corwin met the legendary Johnny Clegg, too: 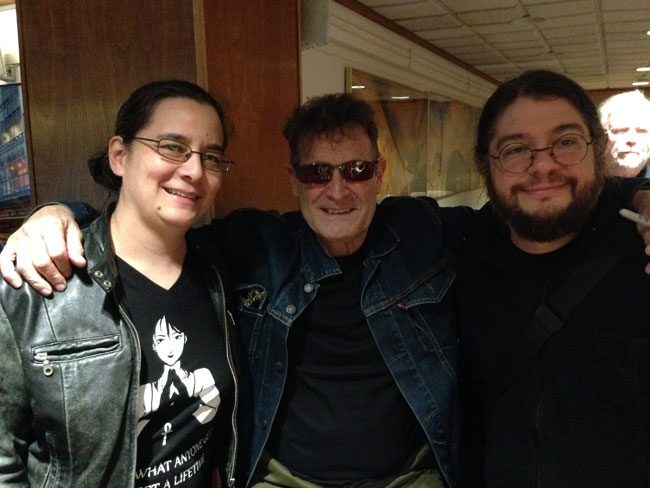 As some of you know from my tweets, I’m a huge fan of Johnny’s son Jesse Clegg. Here’s a recent song of his that was a hit in South Africa, a duet with Shekhinah:

Lately I’ve been listening to quite a lot of Adam Granduciel’s band, War on Drugs. One of my fave tracks is called “Under the Pressure” and I honestly think all the live versions are great. There are some great concerts on Youtube of these guys. I had heard more ABOUT them that I had heard OF them until they played Coachella and I was mesmerized. Good stuff:

I better get this posted now or I’ll never get around to it.

I hope the trash fire of politics isn’t getting any of you too too down and you remember to listen to your favorite songs–or to find new ones–to soothe the soul. Or fire up your revolutionary ire, if you prefer. Lots of love from here!