The day after Christmas isn’t necessarily a let-down. Sometimes it’s a relief, you know? What I felt most on the day after Christmas, though, was restless. We’d spent so long working our way up to it that now that it was over, a large part of my brain was like okay, now what?

The fact that I had the feeling Things Were Happening in New York and Boston that I should have been a part of regarding careers and lawsuits and funerals didn’t help. I was literally a thousand miles away. But while my angst was interior, everyone else in my family’s was exterior.

I can’t. I can’t bring myself to detail the train wreck for you. It was gory only in the emotional sense, no literal blood spilled, but metaphorically speaking… yeah, it was gory and messy and there were casualties.

Isn’t it funny that after all this time I still don’t like to think about it? I mean, sure, I glossed over plenty of stuff when I was first starting to tell this story. I skipped epic fights between me and Ziggy–and epic non-fights like him being passive-aggressive or disengaged while we were recording. I think I eventually filled you guys in on all those. I don’t know if I’ll ever get around to digging into everything that went on with my mother and sisters, though. Not even in therapy.

I suppose I should at least give you the rundown on Mel and Remo, though, right?

What we found out the next morning was that Remo had talked Melissa into staying one more day in Tennessee. I wasn’t clear if that meant one more day for the relationship, too, or if that was definitely toast.

Melissa and Claire meeting again that day was like the spark meeting gasoline. Things went quickly up in flames. Good thing Landon was visiting Jake, so he got to miss all the yelling. I take it that when the motel contingent arrived at Janine’s, she and Lilibeth and Claire had been in the middle of two things: putting out all the leftovers for people to eat and having an epic fight of their own. They broke the fight off when Melissa went at Claire, retreating to various vantage points with paper plates.

Mel had handed Ford to Remo, knowing that would keep him from raising his voice. “He doesn’t love you, you know.”

Remo just made a pained face.

“Excuse me?” Claire replied in her overly sweet way. “You’ll have to be specific, dearie.”

Claire folded her own hands in her choir pose. “And I supposed you think you’re going to fight me f–”

“He doesn’t love me, either. He’s not capable of it. What he loves is a charity case. He loves being needed, keeping you dependent.”

“Then he’s simply perfect for an invalid like myself, isn’t he,” Claire said.

Mel then turned to Remo and said, “She’s just using you! Can’t you see that?”

That was the point where I stopped trying to follow what was being said. If it wasn’t going to make sense, why listen?

Remo eventually took her out of there. And when Claire demanded to know where they were going, he said he was driving Mel to Atlanta. Which was a six-hour trip each way. So we knew we weren’t seeing him again that day at the very least.

The row between Janine and Lilibeth and Claire picked up again then… maybe I can’t think about it or describe it because it traumatized me so much as I just didn’t understand it. The main fight was between Janine and Lilibeth, I think, but Claire was doing her best to put a wedge between them–no, I don’t know why. Lili seemed very put out that her former sidekick and partner in crime no longer sided with her, and attacked Janine on various points, including many that were standard Claire harangues. Claire was unpleasant to both of them but had to agree with Lilibeth on many of these points since she so often made them herself. There was plenty of cutting each other down to size about weight and looks and inability to keep a man.

As Court would later say, “You’d think the inability to keep a man would be a great point to bond over, right? Wrong.”

Anyway, I’ll cut to the chase: Janine had had enough. Christmas was over and her patience was done. She threw both Lilibeth and Claire out. And me and Ziggy and Court while she was at it. Something about having had enough of our filthy, immoral influence. She’d caught Landon trying to color streaks in his hair with magic markers and prancing and wiggling his hips in front of the bathroom mirror while using a toothbrush for a microphone.

While Lilibeth railed on with an “I didn’t need any of you anyway” soliloquy and “You should all be grateful I even bothered to come here” and “That moral high ground won’t save you,” and so on, Claire simply broke down in tears. “But… but… what? Where? How?”

I’d reached my limit, anyway. I did as my mentor had and got the hysterical woman into my car (as well as everyone else who was no longer welcome), and (eventually) drove away.

I dropped Lilibeth at the bus station. “Do you need money for the fare?” I asked as I helped her get her suitcase out of the trunk.

“I’ll be all right,” she said sullenly as she lugged the bag toward the station. I finally took it from her and carried it toward the waiting area “I have some resources to draw on. You think you’re getting rid of me, don’t you.”

“I’m just saying you haven’t seen the last of me.” She gave a knowing smirk that was exactly like the one she’d perfected in junior high.

I was tired and in no mood to play games. “Whatever. Planning to show up on my doorstep in Boston? or New York? Or wherever I might be next?”

“No, but a subpoena might.” She stopped a few feet from the ticket window. “You want to really know what the last straw was for my second husband?”

“No, but you’re going to tell me anyway.”

“He didn’t want to shell out a dime to help his father in law with his legal troubles.”

Oh. Shit. “So that’s why he suddenly appeared.”

“And disappeared again,” she said. “But I know where he is. It’s just a matter of time getting the case ready. He’s going to take you and your cheating ass and the sons of bitches at the record company for all you’re worth.”

Why burst her bubble about Digger’s legal chances? I didn’t say anything but goodbye. Let her think he had any kind of case against us or BNC. At least someone would be happy about something, then.
—
[Hey folks! Just FYI, I’m running a Kickstarter right now for a romance and erotica book project I did with Laura Antoniou and Midori called SILK THREADS. It’s three novellas set in a magical Japan of the past, present, and future. You can pledge to get the ebook, paperback, or many other rewards, and in just one week we’ve blown right through every stretch goal but one! So every backer will get a lucky red bracelet and cover art print card as a bonus. Check it out if you’re inclined: https://www.kickstarter.com/projects/ceciliatan/silk-threads-novellas-by-midori-laura-antoniou-cec?ref=3hkkm4 -ctan] 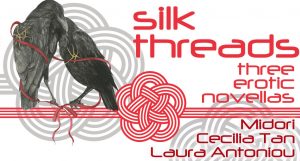