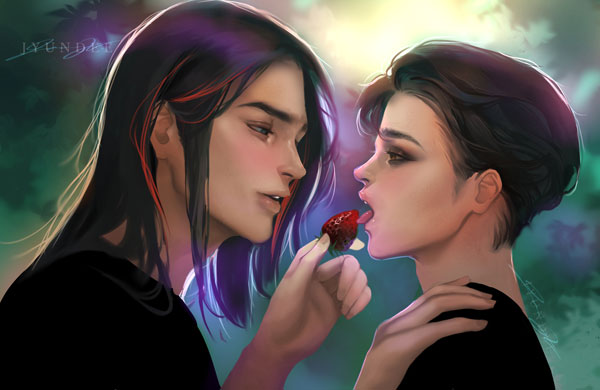 And here’s the final piece of art of Daron and Ziggy we have for the anniversary celebration! I can’t even remember how the idea of the strawberry came up. The artist was asking me about their relationship and talking about Daron coming out of his shell and somehow we got to Daron feeding Ziggy a strawberry. So there you go. 🙂

Perhaps it had something to do with this recent scene where Courtney comes over to cook dinner with Daron and Ziggy in their sublet in Back Bay:

Ziggy brought plates and spoons, but in the end we didn’t use the plates, really, we just dug directly into the still-warm cobbler with our spoons and ate until it was gone. It had peaches and strawberries in it and it was really good. Ziggy licked the dish in the end and got a red streak on his chin of strawberry stuff.

I licked it off his face and Courtney took that as her cue to say goodnight. I thought it was thoughtful of her for leaving us to our own devices. After all, sex with Ziggy was sweeter and more satisfying than any dessert. I later realized she’d left us with all the dirty dishes.

Please feel free to write all the fanfic about the strawberry that you want.

Now here’s a transcript of last night’s chat with Daron. The chat room was being wonky and no one’s names were showing up, plus it was showing everyone’s locations as inaccurate? But here you go:

daron: Hello! Anyone here yet?

daron: We’re having a little technical glitch at this end but I think it’s all working now
 
daron: The chat isn’t showing me who else is here is all
 
Guest 676: i see me logged in, but my response came up as guest???

daron: Now I can see in the side window it has your name but your avatar is blank
 
Guest 676: and i don’t know why it says Jackson
 
daron: Jackson, Missisippi?

daron: Ziggy’s distracting me and saying I only do online chats so I don’t have to get dressed up

daron: LOL were you in Disney for work or fun?

Guest 676: Went to Ft. Lauderdale to see Twenty One Pilots

daron: And thanks — 9 years feels like a long time. Because it is, I guess
 
daron: How was it?

Guest 676: Well….. maybe the subject of being “over produced” might be a touchy subject????
 
daron: Did you feel 21 Pilots was overproduced?
 
Guest 676: i liked them more when they first started out… drums, laptop, piano and uke…. but now it’s a major laser extravaganza

daron: Live shows right now are all like that I think.

daron: All the money in the music biz is in live performance now and so people are putting more money into it

daron: And the record companies want a cut of course

daron: Didn’t used to be like that. They were just about selling the packaged music and you went on tour to promote the record and sell more of it.

daron: People would even tour at a loss to pump up their sales. (which was crazy too)

Guest 676: do you think there is still a Thirty Seconds to Mars risk, where the band ends up owing money?

daron: I think they took a lot of risks that were all about putting themselves in a higher tier of fame.
 
daron: I know they say you have to spend money to make money but still.

daron: People put themselves in a hole all the time in the business trying to make themselves bigger.

daron: Sometimes it pays off.
 
Guest 676: what do you think of artists now releasing all the music on an album at once instead of staggering the release of singles?

daron: There’s a weird relationship between singles and albums.

daron: The unit of music is the song. The “single.” You didn’t really have “albums” as an artistic unit Until later.

daron: An album is sometimes a big concept but it’s usually just a collection of singles, right? And the only reason to “release” them one at a time was to keep radio airplay of the album high for as long as possible to drive more sales.

daron: AOR radio (album oriented rock) never cared what single was out, they’d play whatever they liked from a record

daron: That’s how you ended up with songs breaking out and hitting the charts that weren’t even released yet

Guest 676: i think Imagine Dragons does a good job of keeping multiple singles at the top of the radio play list.

daron: So anyway, releasing all your songs (and videos) at once makes perfect sense now that the way the charts work is by weekly total downloads of an album and not

daron: by how many are sold in stores. And the chart is more important than ever to drive the sales algorithms.

daron: What are you all listening to right now? My current fave band has the worst name ever

daron: I have not heard the new culture club! But I follow Boy George on twitter. i should see if i can youtube it right now

Guest 676: That’s what I’ve been listening to… LIFE. I honestly can’t decide if I like it or not

daron: Pulling it up on YouTube right now… Whoa, so ska/reggae. I mean, it was always there in their music but this is really straight up

Guest 676: I keep getting distracted by George’s voice…

daron: My recent fave is a band called The War on Drugs. Which is a terrible name for me. But the music’s great.

daron: Their live sound is huge.

Guest 676: And of course there is always some drama between George and Jon… Jon has once again “left”
 
daron: I know how that is.

daron: I just think of the story about The Police playing a couple of songs together at Sting’s second wedding or something and Stewart saying later that by halfway through teh song he wanted to kill him.

Guest 676: do you have a favorite track?

daron: “Under the pressure” is probably their best known song and very classic for the War on Drugs sound. if you like that one you’ll like all of it.

daron: No, I’ve been offline most of the day. What’s up with him?

Guest 676: He’s taking a stand. He’s inspiring (as usual), but what I found interesting is that Tommy Joe is liking the comments, while also liking comments that are the polar opposite every day.
 
daron: ahhh yeah.

daron: What’s Ziggy *not* up to is the question. He’s doing a million things. he’s doing some fashion thing now with a line of purses and accessories?

daron: Michelle hooked him up with some underground designer thing and it’s huge in Japan of course

daron: That’s just the newest thing. He was jealous of Adam on Glee, though. I told him to chill out, he’s too old to play a high school kid

Guest 676: hahah….. gotta love Ziggy!!!!
 
daron: You want to feel old? Google how many years ago Wayne’s World came out

 Guest 676: Oh…. I did hear something I liked the other day…. Mind Bath – Flower Tattoo

daron: I like this. Kind of trippy R&B. They’re from Montreal?

daron: Heh. Ziggy can always be talked into that.
 
Guest 676: I fell in love with Montreal last year… I want to go back

Guest 676: Did Moondog 3 ever play Montreal?
 
daron: Yeah we did. Both Toronto and Montreal on the same tour, right?

daron: Pretty sure it was that same one.

daron: I remember Toronto better because we were there for longer. Also that was where Ziggy and I ran away for a while.
 
Guest 676: I was just telling someone the other day about Daron playing at the old Arena in St Louis, right by my house when I lived there. So bummed I missed it.

daron: Oh man, with Nomad, right? I mostly remember getting caught in traffic trying to get there

daron: And Remo being like don’t worry they can’t start without us LOL
 
Guest 676: Traffic during the Cardinals game if I remember correctly
 
daron: Afterward, yeah.

daron: it all worked out in the end

Guest 676: It still seems strange when I’m in STL that the arena is gone and a hotel is now there
 
daron: There’s a lot of fancy hotels in St Louis now. Have you been in the one where the train station was turned into a hotel and conference center?
 
Guest 676: Yep. I worked at a shop in the shopping area there for awhile. (Long time ago)

daron: It’s trippy. The whole huge lobby area is now a fancy bar where they project whales and stuff on the ceiling.
 
Guest 676: What was your favorite venue to play?
 
daron: Honestly I love playing the small places. Nightclubs and stuff.

Guest 676: I like to hear bands at the Ryman, because the acoustics are so good, but the seats are awful…

daron: Yeah, some halls are like that. The Berklee Performance Center is like that. Acoustics are great but if you’re more than 10 rows back you really can’t see well. It’s long and narrow and the balcony is like in another state

daron: But I guess it was made for chamber orchestras and such where there isn’t a lot to SEE exactly

Guest 676: Ha! The Ryman is old church pews === which makes sense since it’s an old church… no padding and they SQUEEZE you in, plus there are poles that obstruct the view of the stage

daron: Oh man. There’s a similar hall here in Mass. in Worcester called Mechanics Hall, but they took the pews out and they put folding chairs out for concerts.

daron: It has a really cool balcony though, only like 3 rows deep that goes all the way around the square auditorium. I guess now that I think about it Symphony Hall is kind of like that too

daron: Hope you guys have some questions for ctan for her livestream. She’s freaking out over here bc technical difficulties of some kind.

Guest 676: Have you seen any shows at the Hammerstein in NYC?

daron: No, who’d you see there?

daron: LOL nothing wrong with that

Guest 676: I’ve seen them 4 times in 4 years… it’s been interesting seeing the changes

daron: 4 times in 4 years is not extreme. 4 times in a week is extreme.
 
Guest 676: Tell Cecilia to not trip about technical difficulties… she always pulls through
 
daron: LOL, I know. I’m like just reboot it see what happens

daron: Thanks! You have the URL for the video over there?

Guest 676: Yep… heading over there now. Have a great night, guys! Don’t do anything we wouldn’t do!

daron: OK! Good night and thanks for chatting!

Thank you all again for taking this journey with Daron over the past nine years. As I said in the first of these anniversary posts, I believe we’re in the the final year of Daron’s major arc. When this arc closes, of course, there are may avenues and characters we can explore, but I’ll cross those bridges when we come to them!

We now return you to your regularly scheduled chapter posts! (There will be a chapter tomorrow (Saturday) which I owe you guys from last week’s Tip Jar fill-up!)