On Labor Day 1991 we played the Biloxi Coast Coliseum. If you’ve been to the Biloxi coastline, chances are you went for the casinos. Back then, the casinos hadn’t been built yet. Or if they had, I don’t remember them. We had taken over a somewhat fleabag hotel where Nomad had stayed before. I was reminded of Australia for a couple of reasons. The proximity to the beach was one.

Waldo and co. set up shop in the main suite on the second floor (it was only a two story building). “Can’t believe Holiday Inn or Hilton haven’t come in and bought up all these places,” he grumbled about the lack of voice mail.

“One good hurricane could wipe ’em out,” Remo answered. “Just like the Jersey Shore. What corporation’s going to take that chance?”

It being the last night of the tour, various friends and family were flying in, and then Remo’s plan was to stay there for a couple more days, resting and recuperating. Another reason it reminded me of Australia. I don’t know if Remo planned this tour to end at a sleepy little beach resort or if that was just convenient.

This time, me and mine were not going to be able to stick around. I regretted that somewhat, but no rest for the wicked, you know.

There must be a band called that, right? The Wicked? Probably more than one.

Ziggy and I had a room on the ocean side but there wasn’t much to see from our window. The bus had pulled in this morning during a driving thunderstorm and we’d stayed in it until it lightened up a little before noon. It was still raining now, but not in such biblical proportions. I’d heard a clerk downstairs say something like two inches had fallen. Not a good beach day.

“What do you want to do now?” Ziggy asked.

“Are you getting restless? Because you’re a menace when you’re restless.”

He looked back at me from the window with a slight smirk. “You know me well.”

“Experience brings wisdom,” I said, sitting down on the edge of the bed. “Honestly, I think I could stand to just lie here and stare at the ceiling…” I trailed off and looked up, then at him again. “Or you could lie on top of me and then at least I could look at you.”

So much for me not exerting myself. You can guess how we spent the next hour or two before we had to wash up and make lobby call. I do not regret it one bit.

Flip and I had our pharmaceutical discussion after we arrived at the venue. Me and Ziggy and him put our heads together in the green room, which was a converted team locker room of some kind. They’d pulled couches and tables into the room but the walls were lined with narrow wooden stalls and shelves.

Think about that for a second. At venues like this, they had to have a storage room somewhere where they piled up all these couches and things to keep them out of the way while athletic events were going on, and then they dragged them out for times like this. No wonder they often seemed rather beat up and musty. (Nowadays I know some artists in their tour riders actually require new furniture in their dressing rooms. This is why.)

“Plus Daron’s more relaxed today,” Ziggy said with a snicker.

Flip brushed that off with a half-nod. “Problem is we’re out of hash oil and this town isn’t exactly a place where we have a known supply. Even Jam doesn’t have a contact down here.”

“What’s the alternative?” I asked.

Flip thought it over. Before he could answer, though, Ziggy jumped in. “The alternative is you power through like the stubborn son of a bitch you are?”

“Well, yes, but I really don’t want the last night to suck,” I said.

“Does it matter? It’s just one show,” he countered.

“But it’s the last one,” I said. “Don’t be stupid, Ziggy. You know opening night and closing night are special.”

“But why? What if the tour was in a different order? There’s not something inherently special about Biloxi, Mississippi.”

“Because they just are. Everyone gives a little extra effort.”

Flip broke in. “Which is why I don’t want you hurting yourself.”

“Playing the guitar is not dangerous. It’s not like I’m going to break a finger doing it.”

Ziggy wrapped his fingers around my forearm. “If the show is going to be different for being the last one, then your adrenaline is going to carry you through, anyway. Maybe you should leave off the extra drugs.”

“You were the one just criticizing me for powering through,” I snapped back at him. “Now you want me to just do it on adrenaline?”

“Not JUST adrenaline,” Ziggy snarled. “Take your fucking chill pill but there’s no need to overdo it is all I’m saying.”

I know I sounded surly as hell. “I’m not overdoing it.” Why was I resentful that he was butting in? Wasn’t this hard enough?

It dawned on me then that Ziggy was this glued to me, this invested, this present in my moment to moment life right now for one reason. The reason on my finger. I blinked. I suddenly resented it a lot less. I put my hand over his. “At least, I think I’m not. Do you think I am? Is that why you’re jumping on me?”

“I am not jumping on you. But you have to admit it’s concerning.”

“This isn’t like…it was that other time,” I said, not wanting it to sound like I was accusing him in front of Flip, otherwise I would have said something like that time you were on painkillers.

Flip looked back and forth between us. When no one said anything for a couple of seconds, he started over from square one. “So let’s do the same thing as yesterday, but instead of the hash oil either nothing, or, honestly Daron, the safest alternative for keeping you loose is a smoke a bowl. Jam’s happy to share.”

“You want a shot of bourbon instead?”

“Yeah. That’ll do. And if I feel like the adrenaline is actually cramping me up worse,” because that’s what I assumed would happen, “pour some into my Gatorade, too.”

“Sounds like a plan.” Off he went to prep his next task, and I took the Vitamin F that started the regimen.

Ziggy’s eyes were shaded as I swallowed it. But he didn’t say anything. I couldn’t tell if he was worrying about me, or if he was thinking about what I was thinking about, which was how he had crashed and burned last tour. The tour where we never made it to closing night.

I wondered if he was as haunted by that show we never played as I was. Most of the time I didn’t think about it. But you know how my brain works, and the kinds of things I considered sacred. When I think of all the things that didn’t keep us off the stage, like illness and injuries and explosions for pete’s sake, the painkiller-fueled mishap that led to Ziggy being institutionalized wasn’t even that bad except for the being institutionalized part. But the missed show. Like I said most of the time it didn’t bother me but once in a while it really haunted me. A ghost show. I’d felt a little better having played Great Woods myself now, but it wasn’t just the show, of course, it was the whole ghost of Moondog Three that loomed up and made me grieve for what could have been.

Now was definitely not the fucking time to go into a maudlin downward spiral about the band that no longer existed. I had just pseudo-married Ziggy after all, wasn’t that enough? Wasn’t that what I really wanted? Weren’t these questions just the perfect thing to send me into a downward spiral?

Yes. Except I had medicated and so I didn’t care. Vitamin F was kicking in. I could sink into a lovely coccoon of not caring.

But I had to be careful, didn’t I? I didn’t want it to seem to Ziggy like I didn’t care–about him. “Would you…work the kinks out of my hand? Please?”

He made me sit, then scooched in next to me on the couch, and picked up my hand and kissed the scarred skin. He wasn’t wearing lipstick, but he’d put a little Chapstick on and it left an invisible smear of minty grease in the middle of my palm. He worked it in quietly, methodically, without saying a word. I watched the ring on his hand, my eye drawn to it like a snag on a piece of cloth, the one thing that was different, the one thing that was new.

My voice came out a whisper and I don’t even know why. “Have I told you I love you yet today?”

(hey steve g. this one’s for you -d)
—
(Apparently I can’t math, but just pointing out we’re really close to a Saturday post right now. Meanwhile see results of the cover poll below! -ctan) 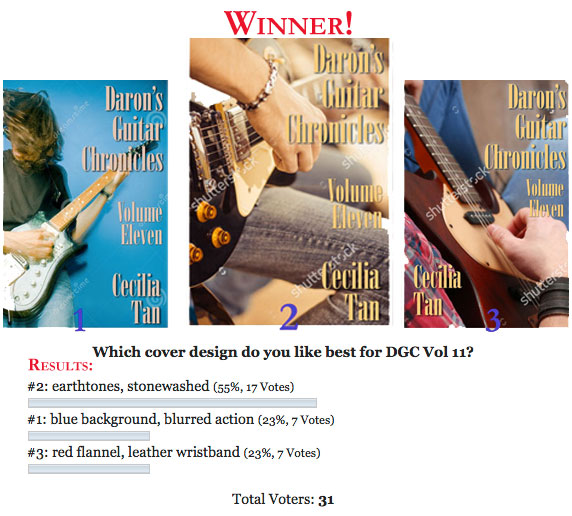