[Reminder folks that the DGC half-time for the summer starts next week. I’ll still be posting on Tuesdays, which means Thursdays are open for fan posts. Share a playlist, guest post about anything DGC-related from music to LGBT rights, fanfic, fan art, video, songfic, songs, you name it. I could also use some volunteers to handle the posting? Email daron.moondog@gmail.com if interested in helping out! -ctan]

Okay, up and at ’em. These words played through my head. They might have sounded a bit like Remo’s voice saying them.

I heeded them. I crawled out of bed to make the alarm stop, and then I crawled–literally–into the bathroom and got into the shower.

I have to laugh when people use the word “rock star” to mean “pampered” or “everything easy.” I felt like I had grabbed a couple hours sleep in the back of a Jeep before going back to the front line of a war.

I didn’t want to go. I wanted to stand there in the shower until someone told me I could forget about South America and go back to bed.

This is your own fault, I told myself. You could have bowed out of all of this because of your injury. You could have–should have–hired a replacement the day you got injured. You could have stayed on as music director and just hired a guitarist. Stevie Salas or Elliot Randall or even Joey Alvs who worked with Ziggy before. You could have left the Nomad tour and concentrated on healing up and then maybe you wouldn’t be in the mess you’re in now, either. You are the only person who forced this to happen.

It being entirely my fault that I had put myself in this position meant I had no one to blame but myself. It also meant I was the only one who could fix it. But at this point the only option for fixing it was… plow ahead.

Which meant getting out of the shower. Which was hard. So hard.

I’m just tired, I told myself. After today it’ll be different. One way or the other I just had to make it through today and then, as the saying goes, it would be what it would be.

Ziggy poked his head into the shower. “Just making sure you didn’t drown in there.”

“Just slow,” I said. I could see he was completely made up and ready to go. “One sec.”

He left me alone to get myself dry and then I dragged myself into some clothes. The knee wore through in my jeans as I put my foot through. Of course I wore them like that. The distressed look was in.

Ziggy handed me half a Pop Tart once we were in the car. He’d eaten the other half while waiting for me to get out of the shower, before he’d put on his lipstick.

I was so fucking grateful for that Pop Tart I almost teared up.

That gives you some idea of how wrung out I was.

When we got to the Hangar it was a flurry of activity, people trying on their outfits and last minute changes to the lights being made and so on. I was quickly distracted from my Colin angst, my self-loathing over my failure to manage my injury better, and my general fragility by getting into my show clothes.

Bernard pulled my hair back into a ponytail but left a partly blue lock hanging down the side of my face. He gelled and curled the end of it and gave the rest a spritz. With the black suit jacket with single vertical blue stripe running down it I looked sleek as hell.

Not as sleek as the dancers, of course, in their actual Spandex and satin.

And the sleekest of all was Ziggy, who was always as sleek as a well-fed black cat but even moreso now, regardless what color or costume he wore. He was wearing his stage persona like a latex glove.

The run-through started more or less on time. Everyone was there for it, Barrett, Carynne, some people from the office, a rep from the Latin American label.

Mills. He came in–or maybe I finally noticed him–around the second or third song. I ignored him and concentrated on the rehearsal, on planning ahead, on hitting my mark at the right time, on making sure the band was clicking. There were a few glitches here and there that stopped the show and I felt so grateful that none of them were my fault I almost flipped over into being smug.

The snag they couldn’t get past, though, was Ziggy’s costume change in the second segment. It took too long. They tried making adjustments to the costume and running the transition from one song to the other again: no dice. They tried adding a third person helping him dress and if anything that made it worse.

A confab was convened. Could they shorten the time with more practice? Was it foolhardy to assume so? Could he keep wearing the same thing through the dance number? Could the costume be scrapped or redone? I was hearing a lot of no from Mickey, Linn, and Josie. No, no, no. They were standing on the floor by the edge of the stage.

I butted in from above. “The easiest thing would be for the band to play some filler of indeterminate length. That way however long it takes won’t matter.”

“What kind of filler?” Mickey asked.

“You know, some kind of jam. Crank up playing with the Intellibeams while I improvise a solo and then when he’s ready signal me and I’ll end it.”

They all agreed this was a good plan. Which meant then we had to do it.

I turned around and looked at Bart. “What do you think?”

“Oh, uh, something flamenco-y, you mean?” He kind of made eyes at me, trying to ask me if my hand was okay without having to ask out loud, I think.

And of course he was right. A flamenco break right there would be perfect, musically, logistically, aesthetically. Except for the question of whether I could actually do it or not. To do it right I would need all my fingers. And to grow my nails out again. I’d trimmed them back before all the doctor appointments.

“Something like this?” I played a riff at him and he picked it up fairly quickly, similar to something we’d messed around with before, and Marvelle jumped in with some mallets on cymbals. “Yeah, like this.”

“Okay, let’s run through the whole transition, costume change and all, and then roll right into the next number,” Mickey said. “Everyone ready for that?” He exchanged hand signals with the crew.

And off we went.

When we got to the halfway point of the show, where the acoustic set should be, Ziggy called for a break. He motioned to Mickey. “I know we’re supposed to keep going right on through, but I need a moment,” he said.

And when Ziggy needs a moment, you give him a moment, even if it means twenty or thirty other people are going to idle their thumbs until he’s ready to go again.

I took the opportunity to visit the men’s room. I wasn’t totally surprised when Ziggy followed me in. “Moment of truth, dear one,” he said. “Can you get through ‘Candlelight?'”

“I think that could work. Just that one song. I know we intended to do fifteen, twenty minutes of the Daron and Ziggy show, but if that’s not feasible, just the one. Can you do just the one?” he asked again.

“I’ll blather for a minute or two when we get on the actual stage. I’m brushing up my rusty Spanish. That’ll take up some time. And then we give them the song they’ve been waiting for. It’ll be plenty. I know it will. If you can do it.”

“When will you know if you can do it?” he asked, biting his lip.

“Oh.” He came close, running his hand down by arm as I kept my palm under the running water. “I didn’t realize it was hurting right now.”

Ziggy heard the truth, though, I think. He made a pained noise himself. “Can you take something?”

“Already did.” I caught his expression in the mirror. Sad. My pain was making him sad.

Then he said the weirdest thing, something I didn’t understand at all. “I’ll make it up to you,” he said, and kissed me on the cheek gently.

So I was confused as well as frustrated by my pain when we returned to the stage to give it a try. But I wasn’t going to give up. Not on Ziggy. Not now.

(This song was just coming out at this point in September ’91. -d) 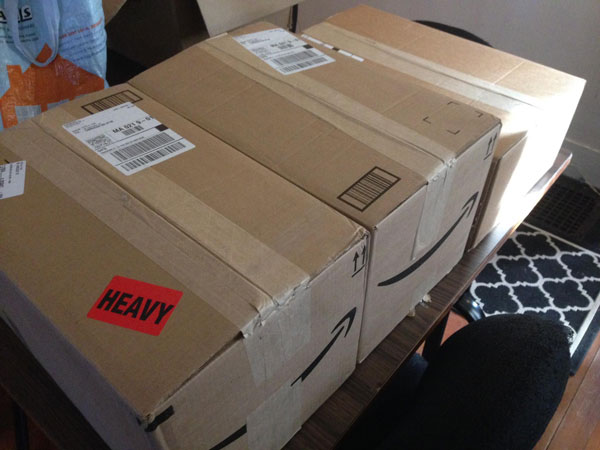 Yahh!!!! Check out what arrived today at last! The actual books to fulfill the Kickstarter orders! I’ll be putting the autographs in them and getting them out over the next 2 weeks you guys! -ctan