(Sorry for the delayed post! Web server and I both crashed overnight so it took a while to get it rebooted and the post re-loaded! -ctan)
Remember how someone told me that Nomad traveled much lighter than your average big rock band? You might recall that when we flew to Japan the instruments and equipment went ahead by a week or something. One crew handled getting the stuff from gig to gig and from country to country, and the band itself traveled like regular people, by train, by plane. We didn’t have a large crew or complicated stage setup, and we relied on local backline and crew at each show.

That wouldn’t be the case with the Tempestad tour. The name of which I only learned at the airport when I saw it emblazoned on the jackets of a lot of the crew and some of the cases that were coming with us. The performers alone outnumbered the traveling crew that Nomad had in Japan. Between dancers and musicians alone was like twenty people, and add in choreographer, makeup artist, wardrobe assistants (two, I think?), and a couple of other staff people like that I wasn’t used to, plus all the usual managers and crew… Let’s put it this way. It was a lot of people.

I kind of wanted to hold Ziggy’s hand to keep close to him while we were being herded through the airport to a waiting area, as if I might lose him in the crowd. I didn’t, but I wanted to.

“It was that or La Tormenta,” he said. He had his traveling eyeliner on, his hair flat-combed aggressively downward in a way that instead of making him look normal made him look like a rock star pretending to be a normal person. “Which I kind of liked but La Tempestad was more theatrical sounding.”

He answered my unasked question. “Oh. Because of the song ‘After the Storm.'” As he spoke, his eyes roved ahead of us. We were in the middle of the scrum of personnel walking through the airport. “On the album it’s ‘Despues de la Tormenta’ but for the tour we decided to switch it up.”

“Ah.” Meetings that no doubt took place while I was out of town. I had seen one or two of the jackets on dancers over the previous week but I hadn’t connected that it was this show until I saw everyone wearing them.

Almost everyone. Among the musicians, Bradley and Bart were wearing theirs but everyone else had opted for whatever their usual traveling wear was. I wore the leather jacket with the rocket on the shoulder. It was the end of summer/early fall in New York but it would be spring/early summer in a lot of the places we were going in South America. Some of them were hot all year round anyway, but swapping hemispheres was still weird.

It struck me how not involved in the logistical planning I’d been, though, when they brought us to a metal detector and security line in a sort of out-of-the-way part of the airport. I didn’t know there were out-of-the-way parts of the airport. Confession: I also didn’t know if we were at LaGuardia or JFK. To say I was kind of out of it is probably an understatement.

By that point Carynne was nearby. “This is weird,” I remarked. I felt any law enforcement thing that was out of the way or off to the side was sketchy and potentially dangerous.

‘This is fast,” she answered. “Our charter awaits.”

“Yeah.” She nodded but didn’t roll her eyes or anything so she apparently approved of us having chartered a plane.

She rattled off some math which I won’t try to recreate here. Her point was there’s a point at which the crew and equipment gets to a certain size it actually costs the same or slightly less than trying to do it all with commercial flights. And a charter is easier on everyone for a lot of reasons, not to mention the interior of the plane is a lot more comfortable, and like a tour bus you can leave your stuff in it.

The jet that awaited us was a Pan Am 747 with an upper lounge above first class, a very large first class cabin, behind that a second first class-style cabin with the big seats and even a few tables kind of like on Amtrak, and then behind that what would have been a regular coach cabin except I am pretty sure there was more room between the rows than usual.

I didn’t really get a chance to appreciate the interior right away, though, since my hand had started to cramp while carrying my things through security, and by the time we reached the jet bridge I was quietly melting down inside. I put stuff down that I could not then pick up again and ended up sitting with my bad hand tucked under my arm and my head down, trying to will the cramp to go away.

This only went unnoticed for a minute or two. Carynne crouched down in front of me to get in my line of sight. “What’s going on?”

“Did you take your medication for it?”

“I don’t take it on non-show/non-rehearsal days,” I said.

“Because it works better on show day if I’m not taking it all the time,” I explained through somewhat gritted teeth.

“It’ll be fine, Car’. It’ll go away in a little while.” At least that’s what I was telling myself, too, but I was having trouble believing it and I think she could hear that.

“At least let’s have someone else carry your things,” she said reasonably.

“Ugh,” I said. I hated the thought that I couldn’t carry my own weight, that the crew had to treat me like I was crippled. But I was crippled and insisting on acting like I wasn’t was only going to make things harder for everyone. I don’t know why I was so stubborn about it.

“That is, literally, part of a sherpa’s job, isn’t it?” she remarked, and then whistled for someone’s attention.

I stayed hunched over, making a fist because that strangely lessened the intensity of the pain, but worrying I wouldn’t be able to uncurl it later.

A moment later Colin sat down beside me. “Hey.”

“I’m not a doctor but I think you should probably at least take some ibuprofen,” he said.

“I should put something in my stomach first, though,” I pointed out. Why was everything so complicated?

“Hm, true. Let’s–” He broke off as they started ushering our group onto the jet bridge. “Figure this out on the plane.”

“Okay.” I still cringed as he shouldered my bag in addition to his own and picked up my guitar case. I was hurting too much to argue, the cramp in my palm sending shooting pain up my forearm. I was vaguely aware of Ziggy being kow-towed to by the staff somewhere ahead of us. He somehow knew how to be gracious to people who were catering to him while here I was, being a pill to Carynne and Colin.

Back to the eternal question. What the fuck is wrong with me?

(This song was originally done by Elton Motello, but I’m partial to the cover by The Damned. And then I found this live version. This is what I need right now. -daron)
— 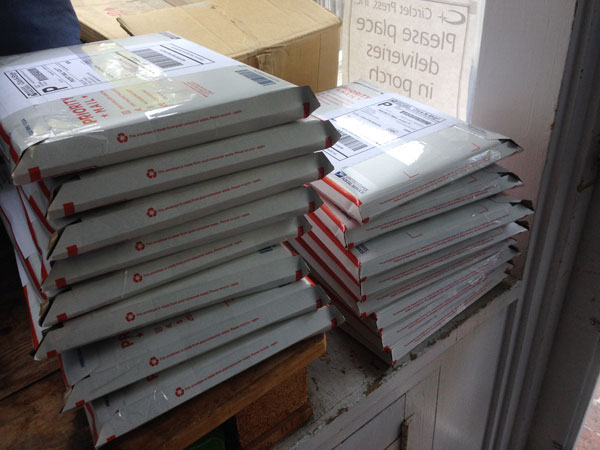 Last of the DGC Omnibus 3 Kickstarter books going out!

Meanwhile, KICKSTARTER SHIPPING IS COMPLETE! The very last of the packages went out over the weekend, so if you haven’t received yours within a few days, ping me! -ctan