So here’s the story of the DGC Meetup in Louisville!

This plan got hatched when I realized that four of DGC’s most active commenters–Sanders, S (aka Stef), Chris (rck), and Bill (aka Mark Treble)–were all within driving distance of Louisville, Kentucky, which was one of the places I was planning to visit on my way to see the total solar eclipse in August. The Louisville Public Library even offered us a meeting room, but it came with restrictions like no food or drink allowed.

Next thing I know Sanders and Stef had found a tattoo parlor & gallery in Louisville with ample space for a meetup AND a tattoo artist willing to oblige if any of us wanted to get tattoos. (If. Hah. If. I think four different tattoos were applied that day? Including mine?) G came down from Ohio to join us, but sadly Chris got into a huge eclipse-related traffic jam (this was the day before the eclipse) and did not make it to the meetup. 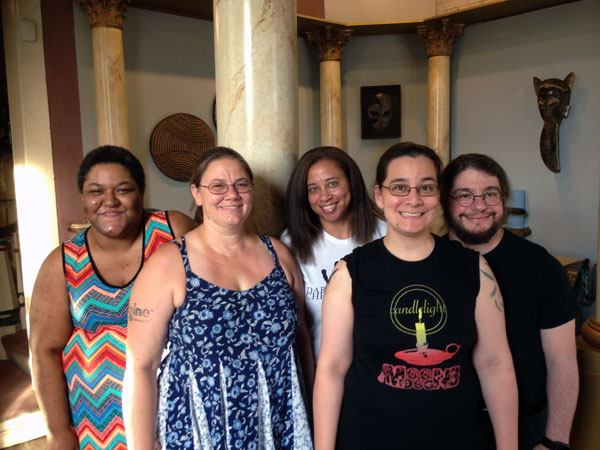 We took the photo above at the end. Bill left before the reading because he didn’t want to be spoiled for reading the upcoming week’s chapter, which was what I read aloud to the group. (I read two chapters, actually. He’s in one of the photos of me being tattooed, though, if you want proof that he’s real, and not a cat or a comment-leaving AI.) You can find the video of the reading on my Youtube channel (embedded below), but because of how timing worked out most of the video is me getting tattooed. There’s some intro at the beginning, and the reading starts around the 50 minute mark. You can skip the tattooing if it’s boring. 🙂

Prophecy Ink, the tattoo parlor, was gorgeous and a place where Ziggy would have felt right at home. It was decorated a lot like his old apartment in Boston, come to think of it. Someone there had a thing for cats, it would seem… 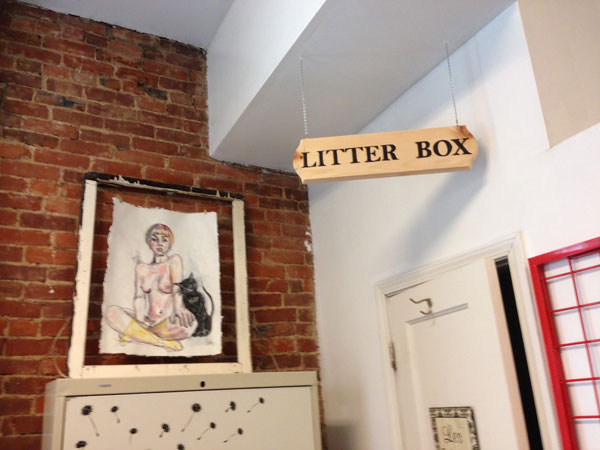 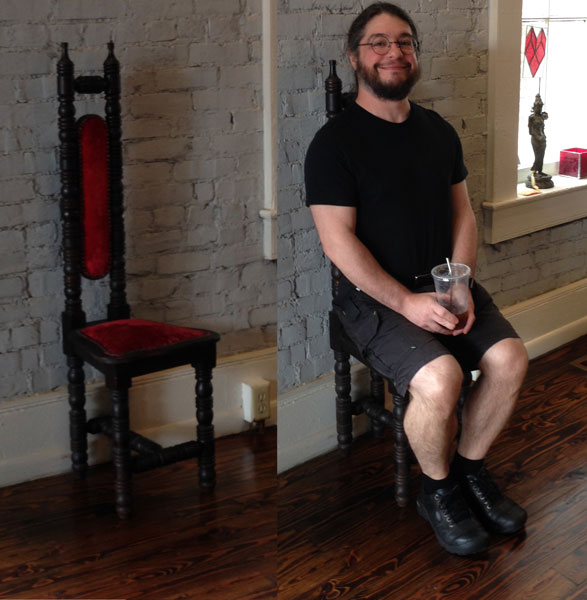 There was a tiny velvet chair. Here’s corwin barely fitting his butt on it.

Chris, the artist who worked on most of us, loves both eighties music and Ella Fitzgerald so he and Daron got along great. Here he is applying the ink to me: 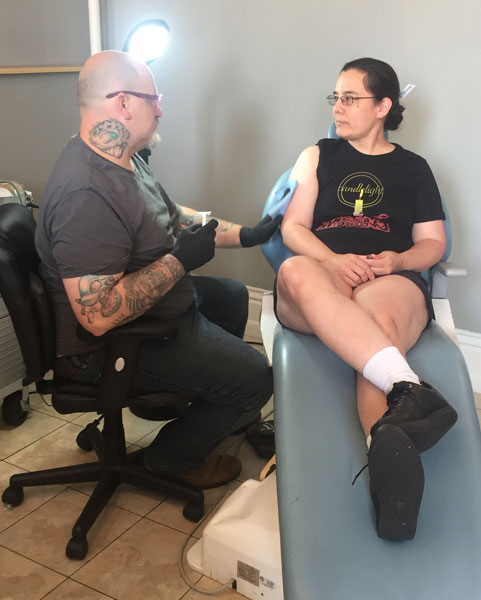 Chris at Prophecy Ink, prepping my arm for the tattoo. 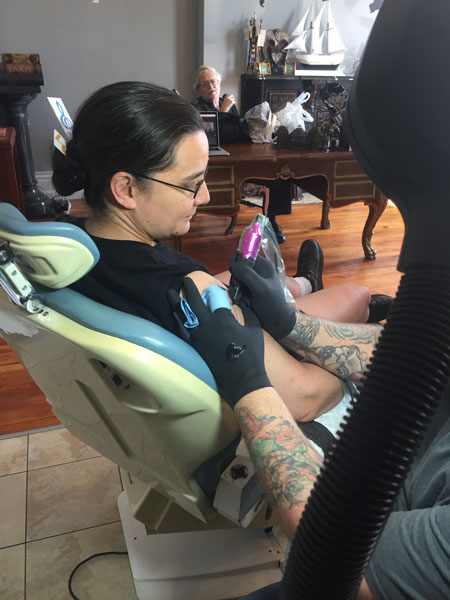 Yes, I’m wearing the cupcake decorations in my hair now.

What I got was Daron’s tattoo of the Moondog 3 rocket logo, but on my right arm (he’s got his on the left), in mirror image. (I often see Daron in the mirror so this makes perfect sense to me.) 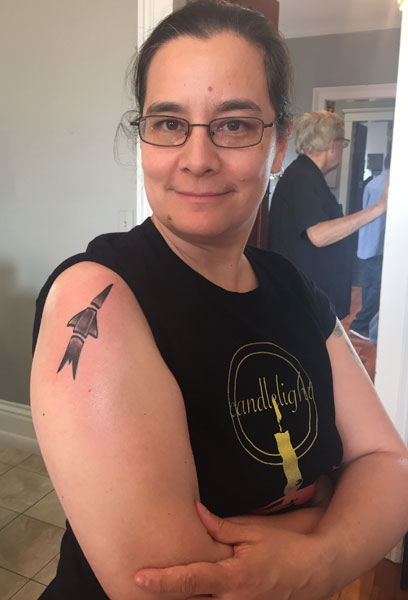 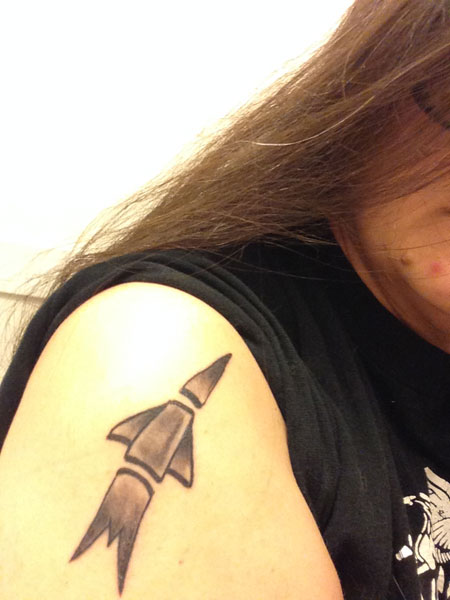 A week later, all healed.

Sanders & Stef gave a Derby glass full of goodies (a rose, malted milk balls made in Louisville, etc) to each person and they gave me a gift bag that contained, among other things, nip size bottles of many many Kentucky bourbons. Grin. I always travel with a bourbon nip in my computer backpack in case of emergency. Did I tell you that before? These will come in very handy. 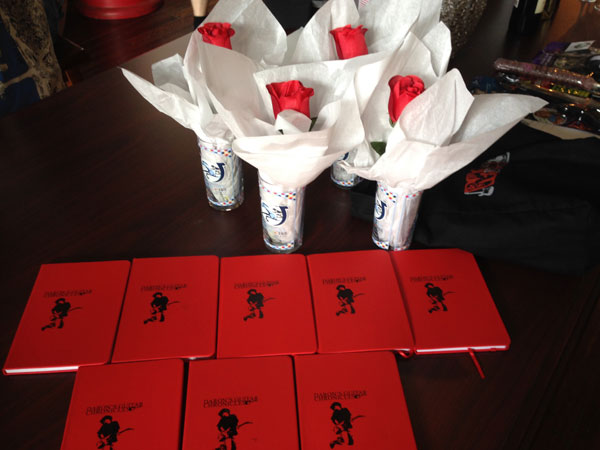 Goodies for all who attended! 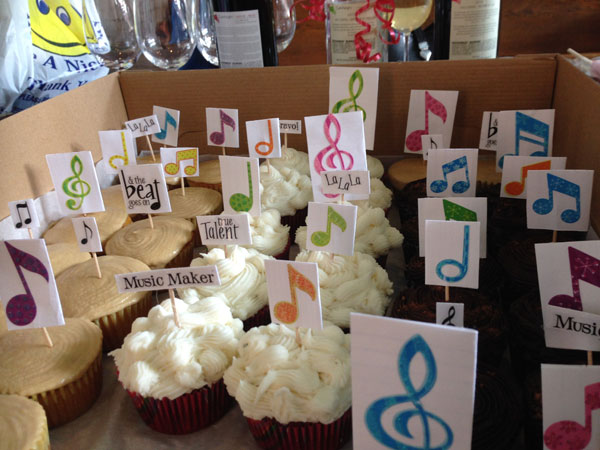 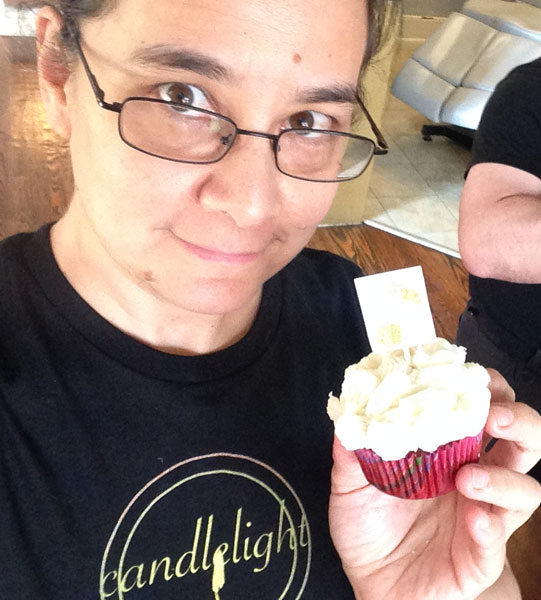 Cupcakes! (Baked by Sanders and thank you to her mom for helping decorate them, too!) 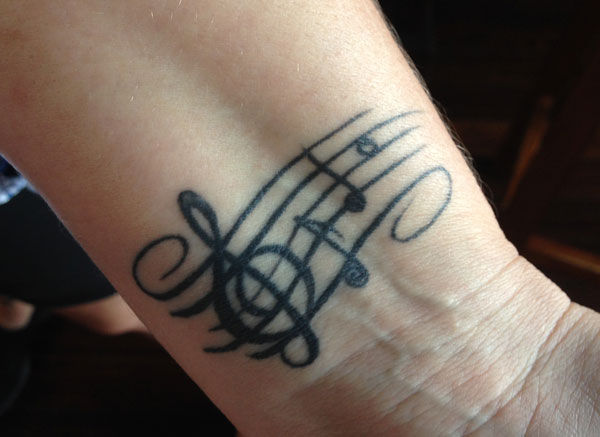 Can you guess (or read) which three musical notes s has tattooed? (It’s d, g, c)

Daron and I had very similar schedules this summer. I did stops in 13 states in 18 days in August. And by the time most of you read this I’ll be on my way to Florida for one last summer fling. (To celebrate the date of the Harry Potter epilogue, MuggleNet is throwing a private party on Diagon Alley at Universal and I’m going.)

Meanwhile, everyone mark your calendars for August 2018, when I’m planning to do a meetup in the San Francisco Bay Area! So those of you who are driving distance to San Fran, ping me and I’ll start looking for a tea shop or bookstore or library or tattoo parlor that could have us!

And I hope to get back to Louisville after my Tor book comes out! If they won’t send me on a formal book tour, I’ll have to come on my own. 🙂

Now, for those of you who weren’t there, do you want to take the trivia quizzes I made everyone at the meetup try to answer? Sure you do!

There were three. One on eighties music that Daron likes, and two on DGC topics, one meant to be easier and one meant to be harder in case the other one was TOO easy. 🙂 I’ll save the “hard” one to post later. Here are the other two!