I forgot to tell you the one weird thing about the MuchMusic party show/duet, which was somehow I ended up on the left side of the riser and Ziggy was on the right. I didn’t even think about it when they were trying to get the microphone on my head; Ziggy’s mic stand was already on the right side, I guess, and we just went with it. With only the two of us, it didn’t really matter which side I was on any more than I cared about which side of the bed I slept on.

The performance high itself was more than enough to make me not care about any pain in my hand. I know, it was only a few songs, but that only strengthened my resolve to skip the painkiller for the show the following night.

Ziggy wasn’t so lucky. He was squeezing my fingers hard as we climbed down off the stage and I could see the way his smile had gone sort of stiff. Antonia was nowhere to be seen. The veejay guy wanted to gush at us for a bit. I tried to make a break for the open bar but he snagged an intern or a PA and sent her off to retrieve something. I finally had to pretend that I needed to flush out under my eyepatch to get him to let us go.

Don’t ask me why it was better for me to lie about my injury than to tell the truth about Ziggy’s. Maybe I was starting to understand the weird world that Ziggy lived in.

I did what Antonia had done, skirting the edge of the big room, pulling Ziggy behind me, until I came to the side hallway where the restrooms were.

I pulled him into the handicapped stall where there was a sink and some privacy and latched the door shut, thinking I was going to grill him about his injuries the way Carynne usually grilled us.

Instead I turned around and had an armful of him, his forehead pressed against my shoulder, his arms tucked between us like a baby bird’s wings, while he burst into silent tears.

I held him. I mean, fuck. What else do you do at a time like that? When some who means that much to you just falls apart? You do anything you can to hold them together. Literally.

I held him with both arms and rubbed one thumb on the back of his shoulder. I was kind of amazed that he could cry that hard without making a sound, other than the roughness in his throat when he sucked in a breath. I heard someone come in, the music and party chatter getting louder while the door opened, then muffling again as it shut. Whoever it was did their business, washed their hands, and left again.

I figured I’d ask while I was sure we were alone. “Does your arm hurt?”

“Oh.” Why that answer made me feel more helpless than if he’d just said yes, I don’t know. “Can I do anything?”

He shook his head, but then said, “You’re already doing it. God. It’s so hard sometimes.”

I waited for him to explain that, but he seemed to be working on calming himself down, so I let him do that.

When he raised his head I tested his mood with a little joke. “Shit. Maybelline should make you a spokesmodel.”

“Why is that?” His cheeks were soaking wet.

“All that and your makeup isn’t even smudged. Jeez.”

That made him snort. “It is the waterproof stuff.” He took a half step back and blew out a breath. “Sorry about that. I have no idea where that came from.”

I reached for his bandaged arm and he flinched away. “I do,” I said. “Now, seriously, you’re in pain and you’re hiding it and that’s tough to maintain.”

He took another slow, deliberate breath. “Yeah. The pills are back at the hotel, though.”

The second I said it, I wanted to take it back. Except I didn’t want to take it back. The thing is, it came out sounding like I had an ulterior motive, such as get him alone so I could fuck the living daylights out of him. But maybe that’s because I suddenly remembered how much I wanted to. Followed quickly by me remembering all the reasons why that was a terrible idea, including him being in pain and having side effects, not to mention we’d either have to sneak away, which would make it all too obvious, or we’d have to possibly go back with people, which might make being alone impossible.

I absolutely suck at thinking once the blood starts moving from my brain to other parts of me. He appeared to be thinking it over. I tried to rationalize it. He really would be better off taking a pill. That’s why they gave them to him in the first place.

If I were thinking rationally, and that were really the concern, of course, the right thing to do would have been to get Antonia to send him back in the car, while I stayed to schmooze with anyone important.

“People will wonder where we went,” he pointed out.

“Let ’em wonder,” I heard myself say. “You’ve fulfilled your duty for the night.”

“So have you,” he said, a mischievous light beginning to glow in his eyes.

Just like when my fire for sex was lit, it was very hard to extinguish, that’s the way Ziggy was for trouble. I should’ve known better. I did know better. But I did it anyway. “Come on.”

We went the other way down the hall, Ziggy taking the lead as we found a set of fire stairs. At the bottom the doors said they were alarmed. I don’t know if they were. Ziggy burst through and sprinted away and I ran after him. As far as I could tell there were no alarms going off, but maybe they meant at the fire house. I didn’t fancy spending the night in jail to find out, so running seemed like the next best option. Glad I was in high tops. I realized if he ran fast enough, I might lose him. 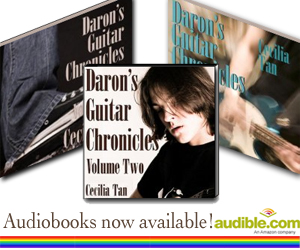 Click the image to go to the Audible.com Daron page...