It was a long bus ride from Montreal to Chicago, over sixteen hours with the traffic, and we were awake for a lot of it. We listened to the CDs Ziggy had bought. I worked on some songs by myself. Ziggy worked on Sharpie-tattooing a stuffed animal for me. And so on.

We had dinner at a Denny’s in Illinois when we still had an hour to go. The sun was still up when we pulled into the parking lot at the Rosemont Horizon, but just barely. We had overnight parking rights. The venue wasn’t actually in Chicago, but it was right by O’Hare Airport. So the scene wasn’t quite as picturesque as in Montreal, what with planes taking off and landing constantly, and a sea of concrete on all sides, but we had a little repeat of the tailgating party and then turned in early. Ziggy and I were doing a morning drive radio show, one of the big rock stations, and even the other bands had some press to do, so it was going to be a busy day.

At the time I didn’t notice that Ziggy didn’t sing much during the jamming. I was concentrating more on the fact that my hand didn’t hurt at all, the scab was completely gone now, and feeling lucky that I was basically unscathed.

When we got up early the next morning though, he was froggy. He blamed it on the early hour.

Courtney came with us to the radio station, just cuz. The station had an office coffee setup outside their studio, and while we were there she made him a hot tea with lemon and honey. He cradled it through the interview. I was thankful this wasn’t one of those ones where we performed. It was just talk in between the news, traffic reports, and songs–ours mostly.

I took a nap when we got back and had incredibly vivid, fucked up dreams where Colin was trying to convince Ziggy to get a tongue piercing and Louis was telling a story about a guy who did that and got electrocuted on a corded microphone… It was very realistic. When I woke up my eyes already were open and Cat Elvis, who had migrated into my bunk at some point, was staring at me.

Outside it was a beautiful summer day, if a bit hot out on the concrete. Barnaby and some of the crew were sitting on the back loading dock and I sat with them for a bit. I was under the impression that they played practical jokes on each other but they considered me too boss-like to let me in on it. They didn’t mind shooting the breeze with me, though.

Inside, Louis was running through a light check. I kind of hovered until he said, “You want to see how this works?”

“Sit down. You know how to play the organ?”

“This is music for your eyes. These here control the flashers, and this cues the Intellibeams.” He pointed out various controls.

“I thought you said Intellibeams were overrated.”

“They are. So many crappy, mediocre lightshows depend on them now. You have to use them right.” He walked me through how he could change the colors and brightness on the fly. “What makes the beam move around is just a mirror moving inside, instead of moving the entire fixture. That’s the smartest thing about Intellibeams.”

“Now that I know how the show goes, this all makes more sense to me,” I said, as I hit the bank of brights in the back and then faded them into blue.

“Check this out,” Louis said. He put his hands on the controls, and gradually edged the blue into orange, then hit the Solar 250 and crowed like a rooster. He could do a scarily realistic-sounding rooster crow, too. “Sunrise!”

“Go on, you play. You won’t break anything.”

So I fussed with the lights for a while. Louis had told me during rehearsals that a lot of shows had gone to MIDI control of the lights, meaning you could sequence what was going to happen the same way you could sequence musical notes for a synthesizer to play. But unless one of your stage instruments was giving MIDI cues to a synch track, what would happen if your lights got ahead or lagged behind your playing? Right now we were better off with human beings doing it. Plus things like follow-spots had to be done by a person. Probably someday there would be a way for computers to run those, like by putting a microchip on the performer or using infrared. Then the beam could find you in the dark, which a human being couldn’t currently do unless you were on your mark.

I didn’t play around with the lights for too long. My eyes got swirly after a few minutes and I gave the place back to the crew.

Antonio gave me a high five as I went into the green room, then said, as I was investigating whether there was Gatorade in the fridge, “What do you think, would it be all right if my brother came over tonight to meet you?”

“Is your brother trouble?” I asked, pulling out a bottle of the red flavor and taking a swig.

“Then I don’t see any reason why not. Did you talk to Carynne about getting him a pass?”

“I did. But I wanted to check with you.”

“Because I’m a guy?” I was confused by him asking me when Carynne’s okay was all he needed.

“No, because you’re the one he idolizes. Wants to be the next Jimi Hendrix. I told him he should work on being the next you.”

I was starting to get the picture. “How old is this brother?”

“Sixteen. He’s living in Chicago with his stepfather… it’s complicated. And I didn’t want you to think I was turning into an autograph hound or something. I wouldn’t ask except he’s my baby brother and–”

“Ray. We call him Ray-Ray, but I think he doesn’t like that too much.”

“Of course not, if that’s what you called him when he was a kid.”

“In his mind, he’s not.” I downed half the bottle in one long go, then wiped my mouth on the back of my hand. “When’s he getting here?”

“He’s taking transit to the airport. Soon, I bet. I told him to be early rather than late.”

“Sure. Grab me when he gets here.”

That reminded me of my own younger sibling and I wondered what she and Carynne were up to. They were in the side room we were using as a production office. This was another one of those ones that was empty except for a few posters on the wall. Apparently the Grateful Dead had come through recently. If the board on the wall outside the office was correct, coming up in the fall they had The Cure, The Beach Boys, and Paul McCartney on the slate. Oh, and the Dead again.

Carynne was showing Court something that looked like a bunch of long, skinny map pieces, spiral bound together.

“Kinda cool,” Courtney said. “And they just make you one every time?”

“Yeah. I’ve never had them ask if it’s a family vacation or what. I think people who go RV’ing must do crazy trips like this. They even mark all the places you can park an RV and what the fees are. Any place that’ll take a big RV can take a tour bus. They can’t always take all the buses and trucks, but the truck drivers usually know where to go if necessary.”

Courtney flipped the pages. “All the next legs are really short.”

“Three’ll feel like nothing.” Courtney looked up and saw me. “Hey. You need something?”

“Nope,” I said. “Just seeing what everyone’s up to. You ok’d Tony’s baby brother coming in, right?”

I was sitting in the green room a little while later when I heard Antonio say “Hey-ey-ey-ey!” from the hallway.

I don’t know what I was expecting. I guess some hip hop urban kid, or neo-hippie Hendrix wannabe. Or maybe just a smaller version of Tony.

I definitely wasn’t expecting a skinny kid in a green polo shirt buttoned all the way up, in slacks that were too short as if he’d grown too fast. He was soft-spoken and kind of shy when we shook hands. Don’t ask me why but I hadn’t been expecting what in the high school I went to would’ve been called a “band fag.” Yeah, the term offends me, too.

Hey, do you think maybe that was the real reason I quit band even though it was my best subject?

It’s live! Daron’s Guitar Chronicles: Volume 4 Ebook is now live most places, with a few more like the Apple store still waiting to come online in the next few weeks. Get it thus far at: 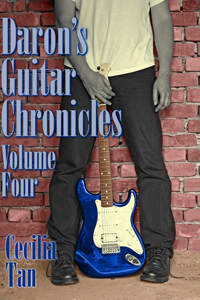 I love this cover photo. I found it in stock art long ago and was sad it was black and white, but it’s such a perfect pose for Daron! Right down to the untied laces, slight pigeon-toe, and hand/tuning pegs where they are… Then I had the idea to colorize it, but only colored the things around him, because Daron himself is still a work in progress. I went with red, white, and blue because this tour is really the “American” book, isn’t it?

Volume 4 covers chapters 206 through 318 here on the website. I very much need readers to write reviews of it on Amazon and Goodreads, so if you would like to help out, please drop me an email to ctan.writer AT gmail DOT com and I will happily send you a promo copy. (Volume 3 could use some more reviews too, by the way…)

And tonight we mail out the Kickstarter swag! Can’t wait! Drop me a line if you want to join in and help with the packing and mailing!