In today’s liner notes, a whole bunch of links about—get this—guitarists and sex. No, really, but first an update from your writer, me.

It’s been an odd several months here at DGC central. Those of you who follow me (@ceciliatan) on Twitter know my health has been wonky. I don’t think I’m a candidate for an episode of House M.D. but it does seem I’m anemic (!) and taking iron supplements has made many of my mystery symptoms like heart arrhythmia go away, but I’m still occasionally seized with a sudden drop in energy, fatigue, bam. (*sound effect of me falling flat*)

Interestingly enough, when I have zero energy or focus for anything else, the one thing I seem to be able to do is sit in bed with a laptop and write Daron’s Guitar Chronicles. Why? I don’t know. Perhaps because it’s something I’ve been doing for so long, it *feels* effortless. I know it’s not. I know a lot of creative energy goes into every paragraph. But perhaps it’s like being in shape for running. A jog around the block that would leave someone who doesn’t run regularly winded and sweat-streaked feels like nothing to someone who runs every day. I have been writing DGC since the 1980s, and ever since this site went live three years ago (three years?!) it has been one of my main writing activities. I do it regularly. It just flows.

You all, though, the readers, have something to do with it, too. Energy comes from you and feeds into the project. By “energy” I don’t mean a euphemism for money. I mean love and attention and caring and engagement: your comments, emails, tweets, Facebook likes, all that, feeds me energy that the solitary novelist doesn’t have. I just turned a manuscript in at Grand Central Publishing and the only people who have seen that book (Slow Surrender, a heterosexual “BDSM billionaire book,” i.e. the romance subgenre that 50 Shades launched…) are me and my editor there. It feels so different when the person who is hanging on the manuscript arriving is being paid to read it versus when the people who are hanging on a chapter being posted are anticipating it because they love it/enjoy it/want it/need it.

Which was all a long-winded way of saying, I love you guys. Speaking of which…

Guess what this is? 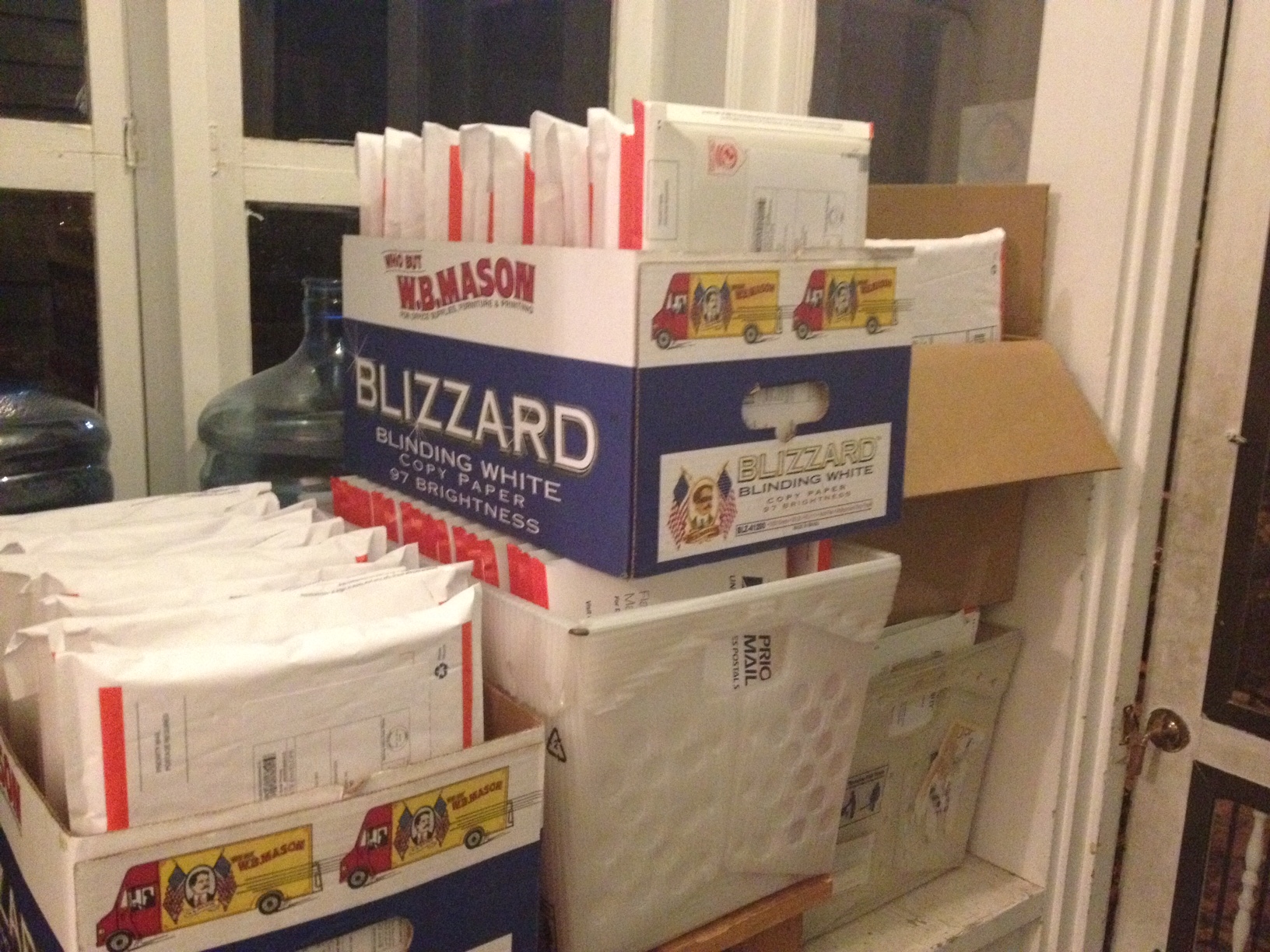 It’s the Kickstarter rewards: books, t-shirts, tote bags, stickers, all going out in the mail to backers! That wraps up the omnibus paperback project!

In the end, the Kickstarter raised $3,386. After credit card and Kickstarter fees (totalling 9%), what I received was $3,081. What I ended up spending on fulfilling the rewards totalled $3452.28, meaning I ended up $371 in the hole. Not bad, actually, since if I sell off what I have left of the merch, I will break even, and meanwhile the book will now be for sale through Amazon, B&N, etc.

If you’re interested in buying any of the above, check out the Merch Page: https://daron.ceciliatan.com/shopping-cart where you can order & pay directly through paypal. Once the shirts & totes are gone, they’re gone, though!

Okay, enough of writer blather and site news. It’s been a while since I posted a bunch of fun stuff.

First of all, it’s December. Which means it’s time to link to:

A VERY GUITARS CHRISTMAS
http://theguitars.bandcamp.com/album/a-very-guitars-christmas
These guys are an all-guitars band form Cincinnati, it appears, and they’ve tagged the album “yacht rock.” Huh. Daron finds this even more hilarious than I do. I’d call it just on the lounge side of surf, twangy guitars with that “swingin’ sixties” sort of sound. Their version of “Sleigh Ride” is probably the best track on the album, which is free to download from Bandcamp, by the way. In true Christmas special fashion, it’s a theme album in which Santa’s elves kidnap the band. Goofily wonderful if you want some Christmas spirit. “Got to get that Christmas spirit pumping, so grab those amps and play me sompthing!” (says Santa).

MEN WITH GUITARS ARE SEXIER
Whether you think The Guitars (OH) are sexy or not, this next link is about a study reported in a Psychology Today blog, in which the researchers found that women thought guys with guitars were sexier than guys without guitars. I’m not completely sure that the conclusion is founded on the research, which was based on friending on Facebook, but… have a look for yourself. And besides, who needs a study? It’s self-evident. (But amusing to see the scientific community trying to quantify something that is just something pervasive in our culture… of COURSE guys with guitars are sexier…)

The gist is that they had various women be approached on Facebook by a guy they didn’t know, sending a photo of himself with or without the guitar. With no guitar, 90% of the time the women blew the men off. But when shown with a guitar, only 70% of the time did the guys get the brush off.

Now, you might just as easily conclude that instead of “sexy” it’s that guys with guitars are more trustworthy and less skeevy-seeming, but perhaps the researchers (who are from Israel) share the cultural biases about the sexual signaling of the guitar.

SEXIEST MEN IN ROCK AND ROLL
The “guys with guitars are sexier” study somehow led me to this next entry. This is a 2009 blog entry from Salon, listing the sexiest men in rock, some of them deceased (Jim Morrison, Michael Hutchence) or clarifying that they only mean their younger selves (Mick Jagger, Rod Stewart), but I mostly agreed with their list, interestingly enough. Or at least, as one of the writers put it, I wouldn’t have kicked any of these guys out of bed for eating crackers. Quite a number of them are name that receive repeat shoutouts here at DGC (Hutchence, Freddie Mercury, Prince, David Lee Roth…) The one disagreement is I would have put Bowie onto the A list, not the B list, of course!

MEMOIR OF A SHORT BOUNCER
While surfing the net to reinforce my memories of goth clubs in Toronto, I came across this hilarious and wonderful piece by a former bouncer in the clubs.

I am 5 feet 6 and weigh 135 pounds. I am also a nightclub bouncer. Oddly, I’m still alive. And underemployed. Having trained at England’s prestigious Bristol Old Vic school… means that my job skills are limited to an excellent command of Elizabethan English, an awesome facility with rapier and dagger, and the ability to cut a fine figure in tights. So, I’m a bouncer.

My mentor in the profession was Jamie, 6 feet 2 and 280 pounds of steroided hostility complicated by a degree in art history. We worked together for several months at a gothic alternative bar on Toronto’s Queen Street West called Club Noir, which was intensely fashionable for about two weeks and is now defunct.

GUITARISTS AND SEXUALITY MORE GENERALLY
Is it just the way the Internet works, or that Google knows what I like, or my browser or something? Or is it really the case that if I start typing in a search box the word “is” followed by the name of a guitarist, one of the top three autocompletes is always “Is so-and-so gay?” Perhaps even stranger, the answer always comes up “yes” in one of the top posts if I click on that, even when the person in question might really not be gay. (The “yes” is usually at some questionable crowdsourced answer site like Ask.com…)

But you know, if nine posts say no and one says yes… does that mean people believe it? What I think it means is that there are still a lot of people curious about the sex lives of rock stars, those people have an expectation that those rock stars are not like “usual” people (in other words, they might possibly fuck anything that moves), and probably that since the rash of comings out that have occurred in the past decade that maybe some people they always wondered about (for good or ill) might have come out (or been outed) since they last checked.

Vai apparently flirted with making some kind of announcement that was hinted at was going to be him coming out or something like it in the 90s, but then he changed his mind and never said anything. So who knows? Vai also has some of the most revealing interviews about what life was like touring with David Lee Roth, where the show was just a warmup for the party, they’d rent two whole floors of a hotel, one that just sat empty as a buffer for the noise between them and the other hotel guests. 50-60 girls would get pulled out of the crowd by the road crew every night and it wasn’t uncommon to find various members of the band and crew parading naked down the hall with a girl on each arm. Vai himself says he barely dipped a toe into the pool of nightly debauchery.

I might play this game some more and see what else comes up.

ALAN MURPHY OF LEVEL 42
That leads me to one story about a guitarist who wasn’t “out” as we think of it, but who was written about movingly recently, guitarist Alan Murphy of Level 42, who died of AIDS in October 1989. Here’s an article about him from The New Gay: http://thenewgay.net/2008/08/hidden-history-gay-guitarist.html

In case you need a reminder who Level 42 were:

DO IT WITH A ROCKSTAR
While we’re on the subject of rock stars and sex, I basically must share this NSFW video (“Do It With a Rockstar”) of the one recent band Daron and I are both currently huge fans of, Amanda Palmer and the Grand Theft Orchestra. (Daron: You’re wrong, C, we both like Gotye and Alex Clare. Me: Shut up, I’m using hyperbole to pump up Amanda’s awesome. Daron: Whatever.) Daron would also like me to point out that he and GTO guitarist Chad Raines are the same size.

Really, though, Chad’s got a lot more in common with Ziggy than Daron… (Check out this article about Chad from a New Haven writer: http://scribblers.us/nhtj/?p=1675) Anyway, Amanda has a blog post on the backstory behind the video (here: http://www.amandapalmer.net/blog/20121109/). They flew to Oklahoma City to film the video with Wayne Coffey of the Flaming Lips, and at one point Amanda asked the three guys in GTO what their ultimate rockstar fantasies were. Michael McQuilken, the drummer, said “flip a table.” Okay, that was doable. Jherek Bischoff, the bass player and arranger of the strings, said it would be to put on like 50 pairs of clean sox and smash a watermelon with his foot. Okay, doable. Chad’s wasn’t really doable–it involved a shaman, peyote, and a loincloth–instead, well, just watch the video. (Amanda herself gets to film her scenes with Stoya Doll, alt porn star, yum.)

So, here’s the NSFW video I promised: