It’s been a very emotional and distracting week here in the Boston area in 2013, as most of you probably know unless you’ve been living under a media blackout since the Boston Marathon. (And if you have been under media blackout, but are still reading Daron’s Guitar Chronicles, thank you!) Nothing like staying up all night listening to the police scanner while a massive manhunt is taking place only a few miles away… The A&E Service Station where the suspects let the driver of the SUV they carjacked go? It’s only a half mile from my house, across the street from my tax accountant’s office.

I’ve been a little too emotionally drained from it all to write a few of the scenes we’ve been working up to for the past month. Thank goodness I’d already written this week’s chapters before Monday’s events shook the city.

Fear not. Mad bombers are not going to suddenly hijack Daron’s story. Although the events of the past week may have felt all-consuming, they are not in fact, the only story to be told. There are important stories to be told there–about patriotism, athletics, immigration, the human capacity for evil, and much more–but those stories are not this story.

If you’d like to read a reaction to the bombing that made many of us here laugh our fool heads off, have a look at this essay by Jim Dowd: Jim Dowd responds to the attack on the Boston Marathon.

I feel the essay is best appreciated if read aloud in your best Dennis Leary accent.

And now back to our story. 🙂

ALPHABET CITY
So, do you remember allllll the way back in chapter 18, when Daron ditches Carynne in New York, in the East Village? He walks east, following “three outlandishly dressed men up one street and down another. They disappeared through the darkened doorway of a club on Avenue A.”

Daron didn’t know or remember the name of the club, but I did, at least at the time when I wrote the original draft of the chapter back in 1992. It was called The Pyramid Club, or sometimes just The Pyramid.

Daron describes dancing in a very dark room, and then the dancing being interrupted by a sudden performance of a tall, bald figure wrapped head to toe in white cloth like a mummy. He never found out the name of the performer, who lip synched to a backing track.

I knew who it was, though. Daron was describing a night I had myself at the Pyramid. The performer he described was Dean Johnson, also known as Dean of Dean and the Weenies. From Wikipedia: “Dean Johnson (1961–2007) was a transvestite musician, party promoter, and was a highly recognisable figure in the downtown New York City nightlife in the 1980s, 1990s, and 2000s. Known for his towering height, shaved head, giant sunglasses, and penchant for wearing short cocktail dresses that exaggerated the length of his pale, lithe figure, Johnson played a seminal role in the emergence of the Queercore gay rock and roll subculture in the East Village.”

A video is worth a thousand words, though. Here’s a song called “Fuck You.”

Another classic, “Death by GoGo,” is disabled for embedding, but if you want to see a pomo intersection/parody of surf punk and a commentary on west coast living, replete with musical quotes from other songs, check this out: http://youtu.be/rOtsppjTaoY

Looking for more info about dear departed Dean led me to this website, QueerMusicHeritage.us, which I think some of you will enjoy poking around, too: http://www.queermusicheritage.us/outoct10dj.html

BOY BANDS
Okay, I think I talked in an earlier liner note about Lance Bass coming out, right? (Aha, mentioned it in a timeline back in Liner Note #5 in which I point out various milestones relevant to GLBT celebrities, coming out, and alternative music. Bass came out in July 2006.) I haven’t yet talked about Ricky Martin, who I knew when he was 12-13 years old singing in the ultimate boy band, Menudo. Back then we didn’t know what Ricky’s sexual orientation would be, but when he came out as gay it wasn’t a huge surprise. (My Menudo story is a very long one, enough to write a book about probably, but the tl;dr is this. When I was in high school I started a Menudo Fan Newsletter that turned into the largest Menudo Fan Club in the world, which I parlayed into my first freelance writing gigs for Superteen Magazine and others, as well as a weekly radio appearance every Friday night on 95.5 WPLJ Radio in New York. All of which led to a lot of interviews, some friendships, and some interesting rock and roll escapades. To learn more, you’ll have to wait for me to write my autobiography.)

Another boy band staple, Jonathan Knight of NKOTB (New Kids on the Block) came around again on the gee-tar since he recently did an interview with Gay Times UK about how Tiffany (herself a teen pop star) had outed him in the national media. He makes the point that there’s really a difference between everyone in your life knowing you’re gay and being “out” in the public eye. I thought some of you might be interested in what he had to say. HuffPo piece on the interview: http://www.huffingtonpost.com/2013/04/15/jonathan-knight-nkotb-gay_n_3084799.html?utm_hp_ref=mostpopular

ANCIENT HISTORY
I posted this photo in comments to a recent chapter, but thought I’d share it again here for those who missed it. When Daron describes Jonathan’s laptop computer, this is the model he’s talking about: 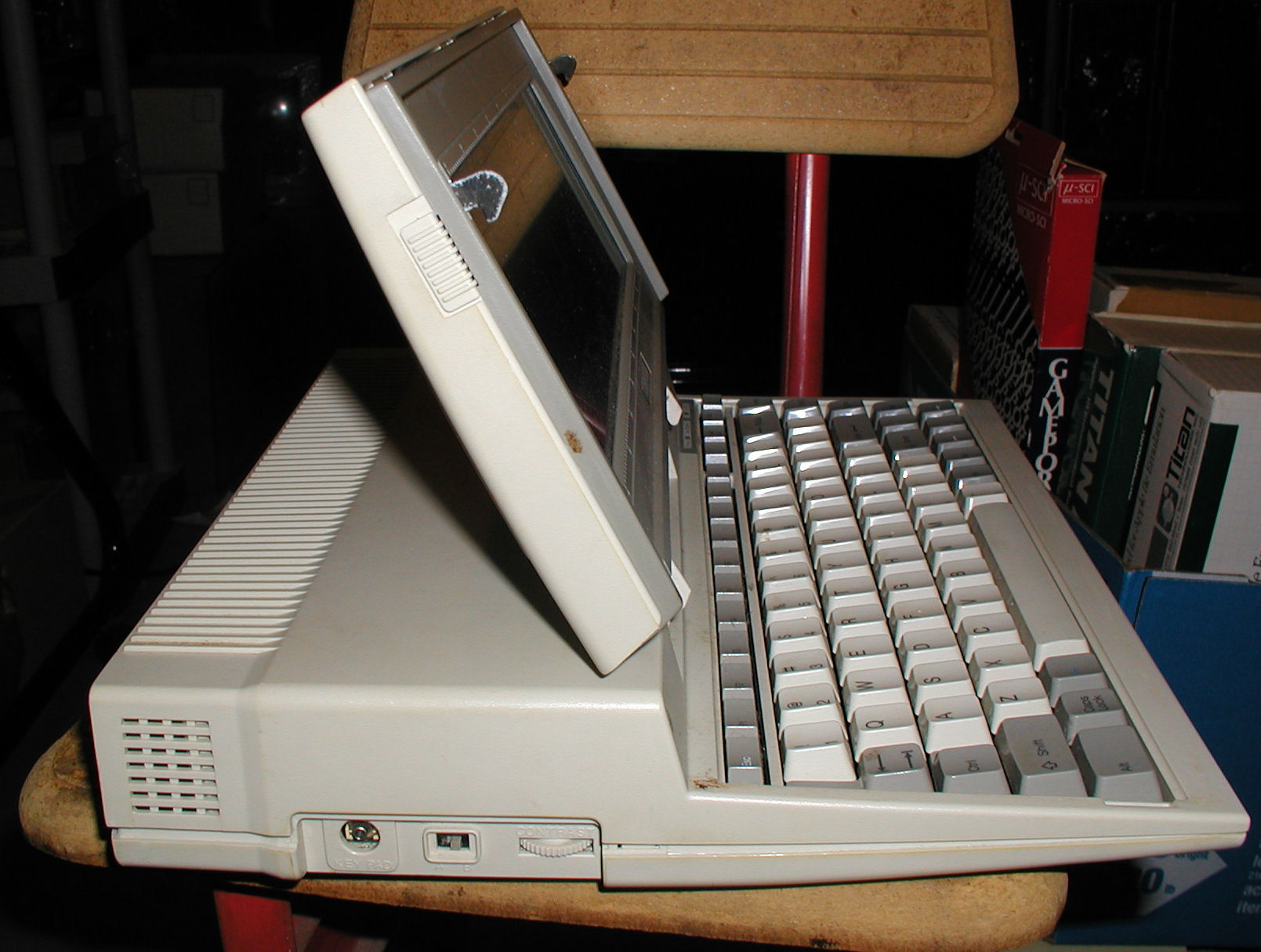 I bought one for myself as a graduation present when I finished university and got a job in Boston, meaning a one hour commuter train trip each way, each day. Many early drafts of Daron’s story were composed on the Toshiba T-1000. I had a Mac II at home and I would take what I had written each day out of the Toshiba and dump it to the Mac somehow. I don’t even remember now how I moved the text, if it was by emailing it to myself, or if I could network the machines or if the T-1000 accepted 3.5-inch disks.

I did that commute every day for about a year. Then I moved to the Boston area and had to find some other way to get that two hours of writing time per day back again!

PANDORA’S BOX (of cool musical stuff…)
This is already like two years old, but if you have somehow missed this video by “the 2 Cellos” (aka Luka Sulic and Stepan Hauser) it’s basically sex on strings. Oh except the plot of the video is ostensibly they’re fighting over a girl. But is it just me who interprets her reaction at the end as “Get a room!” eh?

As it turns out, folks playing classical instruments making witty and intricate arrangements of pop songs is an entire genre of its own now, at least according to what Pandora.com has played me ever since it (sort of randomly) played me the 2 Cellos (a different song) and I hit “thumbs up.” This in fact opened a Pandora’s box of stuff, not just by venerable rule-breakers like the Kronos Quartet, but track after track after track from groups, artists, trios, ensembles, etc… I had not heard of.

Of course, the mother of ALL these “classical goes rock” groups is Apocalyptica, whose INQUISITION SYMPHONY is still one of my favorite albums of all time. Apocalyptica are four cellists and the Inquisition Symphony is mostly covers of Metallica songs, with some Faith No More and Sepultura thrown in.

“Covers” is the wrong word, really. “Arrangement” is a better fit. Listen to this one of “Nothing Else Matters.”

(the video has a nice “making of/recording of a song” theme to it, too)

Hang on, hang on, you haven’t heard Michael Jackson’s “Smooth Criminal” either? Here, it’s worth a listen, especially when you remember it came out in 1987.

I started my first Pandora station recently with only two inputs: David Bowie and David Sylvian. It’s been absolutely fascinating how using just those two data points, Pandora uncannily populates the station with a ton of things I own on CD. The Cure, Dead Can Dance, Patrick O’Hearn, Peter Gabriel… even Mark Isham, who I consider pretty obscure! It’s pretty amazing actually. I arrange my CDs by what I think sounds good together, a system only I can understand, and Pandora managed to somehow divine a bunch of stuff I shelved together but which no record store ever would have.

SOUND-ALIKES
One thing Pandora served me is a song “All Eternal Things” by Trembling Blue Stars. I’d never heard of this band, but the song sounds so much like The Cure I swore it was a cover. It basically copies the drum part from “All Cats Are Grey” as well as Robert Smith’s general guitar sound and style of playing.

Compare that to The Cure, “All Cats are Grey”:

For those of you who love the sound of The Cure, this is a recommendation. For those of you who think like Daron does though, it’s a bit perplexing how a band can sound SO MUCH like another band, especially one as idiosyncratic and unique as The Cure? (As far as Daron is concerned, bands should have a kind of moral imperative to NOT sound like each other.)

Another pairing I have in my head, I swear I did this one before, but now I can’t find it in the previous liner notes! Which might mean I drafted a liner note at some point and lost it before I ever posted it..

LAST AND DEFINITELY LEAST…
I made this teensy video after spending an evening building my birthday present. corwin got me the Gakken Mini Guitar Kit, which I mentioned years ago (back in liner note #6 in 2010!) but didn’t have the money to buy it for myself at the time. Now I’m finally in a position where I could buy myself a $75 present as a splurge, but I realized it would be better to ask for it for my birthday. So I did.

It’s a “build it yourself” kit from Gakken, who are known for that sort of thing.

I expect at some point Daron will try to build himself a guitar, now that I’ve done it. He probably won’t hand-wind the pickup from copper wire, though. He’ll probably buy pickups ready-made.

Anyway, I can’t really play for beans at this point, having had zero practice for the past two years and also the teensy guitar (with only four strings) takes some getting used to! But here we go. Thanks, corwin!

[Video is working now! I think!]