I backed a Kickstarter today. I felt amazingly good when I did it for two reasons. One, I got to help someone who is trying to make something creative happen. Two, I felt I didn’t need to obsessively check my bank balance before I did it.

When I first joined Kickstarter in 2011, that wasn’t the case. I was pinching pennies, staring at fairly mountainous credit card debt, unsure where exactly my writing career was going. But I saw creative projects that I wanted to support. Friends who were trying to self-publish books! Small presses! Indie musicians! A lot of those early pledges were $5 or less because that was all I could really scrounge, but I believed in crowdfunding as a concept and I believed in paying it forward, too. If I was going to be asking people to make donations to my projects like Daron’s Guitar Chronicles, which had a “Tip Jar” before Kickstarter even existed, then I felt it was important to be a giver as well as a taker. I used freeware fonts and software to build the site, but I donated to the creators of those things voluntarily once I had made a little.

But the third thing that has developed since 2011 is that Daron’s Guitar Chronicles has started to bring in a steady trickle of income. It’s not a ton, but it’s enough to be the buffer zone between every dollar needing to be accounted for obsessively in my budget and being able to click “Back this project” on Kickstarter without fear. That buffer is the difference between one quality of life and another.

Writing and publishing Daron’s Guitar Chronicles had already improved my quality of life as a creative writer because of the tremendous validation that it brings. That people read it every week, that they comment and talk to Daron, that people tell their friends and leave ratings on Goodreads and all the many many other things that people do to show their support… that’s huge. That’s all huge. And that’s all aside from the money. But today I’m going to talk about the money, because it’s worth talking about.

I just filed my taxes and I thought it would be keen to show what the DGC financials over the past few years have been like. After all, you all are the ones paying the money in. Corporations report their earnings to their stockholders. I see no reason why, as an ongoing crowdfundee through my serial fiction, I shouldn’t do the same.

Here are the income amounts I reported on my tax returns as coming from donations/sales through DGC:

This doesn’t include additional income I’ve made from selling the ebooks on Amazon, or the audiobooks through Audible. Audible paid me $1500 up front for the three DGC audiobooks which has not yet “earned out,” meaning more copies need to be sold before I start getting additional payments. Here’s what ebook sales (Amazon & Smashwords) have looked like over the past three years:

(Eagle-eyed observers will see that ebook income went down from 2012 to 2013, despite the fact I released DGC vol 5 and did a big blog tour of m/m romance sites, etc. Two things to realize there: one, we’ve been seeing per-title sales leveling off or dropping a lot in ebooks across the whole industry as the number of titles available keeps growing exponentially but the number of readers is leveling off. Two, sales might have dropped off even further if I hadn’t released a new ebook.)

Anyway, add together the income through the DGC website with the ebooks and voila, grand total for the year 2013: $3315.46.

Daron right now is saying, hey, so I was already #1 in your heart, does this mean I’m now #1 in your.. um… money-counting mind? I think what I’m trying to say is that DGC would be my most personal, and therefore most emotionally important project, even without the money. But to see that it’s grown into something I can easily justify making a priority? That’s even better. 🙂

Here are a couple of concrete ways to think about that money:

Someone asked me recently how much time I spent on DGC, per week? per month? total? I said I really couldn’t add up the total, since I would have to estimate at least all the way back to 1987 or so. But as far as how much time I’m spending on writing and maintaining the site now, I’d say it’s usually 5-7 hours per week. If we averaged that to 6, x 52 weeks, that would be 312 hours. So my hourly rate earned? $10.62 per hour. That’s actually not terrible. (Federal minimum wage is $7.25/hour in the USA, $8/hr in Massachusetts where I live, and it’ll be going up to $11/hr here by 2015).

$3,000 is what I paid in federal estimated taxes this year, with another $300 to the state. So DGC alone basically covered my entire tax burden. SIGNIFICANT.

The $3,300+ DGC raised this year could have paid my entire car insurance bill plus cat food, cat litter, and vet bills for the year.

Any way you slice it, three grand is nothing to sneeze at. No, it’s not enough to live off, but that’s why I have all the other irons in the fire that I do. When you add them all together, I’m making a living. I couldn’t say that for a good ten years (which is why the credit card debt got so high).

The next Kickstarter is on the horizon. When you combine book 4 and 5, which make up the entire Moondog Three 1989 tour, it turns out to be even larger than the first omnibus we did! Wow. So I’m looking at launching that in mid-April.

Then there’s the fact that a couple of people have strongly suggested I do paperback editions to correspond to the ebooks (and audiobooks). I already have the typsetting mostly done, since I did PDFs for the ebooks, but I’ll need to purchase some new cover art. The original art on DGC1 is no longer available–I’ve looked–and I only have it in really low resolution. I’m debating whether to fold these costs in with the Kickstarter or try to handle it all separately. I’ll run the spreadsheets and we’ll see how it goes, I suppose.

The next big arc of plot is the one that will see Daron and Ziggy on the same continent again, finally (though of course they’re each on their own planet…). As usual, I don’t know how long the events in my head are going to take. All I know is I’m really looking forward to writing it. And I’m really looking forward to taking you all on the next big rollercoaster ride. Thanks for being a part of it!

Now, speaking of Kickstarter, remember Steve Grand, the gay aspiring country singer who released a YouTube video that went viral? He has a Kickstarter on RIGHT NOW (closes March 30!) to crowdfund an album:

On the theme of suffering for your art, MCA Hogarth pointed me at this from the Historical Pictures twitter feed: https://twitter.com/HistoricalPics/status/441589043282075648/photo/1 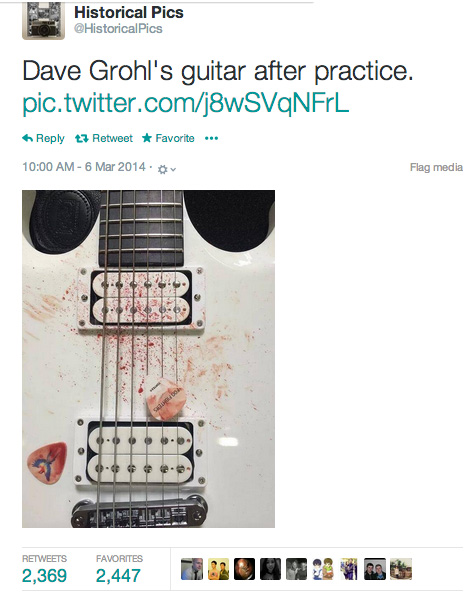 (To which he says, well, not recently anyway.)

On Monday, we’ll continue with Ziggy’s Diary. It’ll wrap up at the end of this month.

Thanks, again. You guys rock.