I found a payphone and left a message at Sarah’s saying I hoped they weren’t worried, I was fine, and I’d fill her in when I got there and hopefully she’d be there when I arrived… She had the kind of voice mail you could call to retrieve messages, so if she and Jonathan were out searching for me they could at least check to see if I’d called.

Then I called Jonathan’s, in case he’d gone home, but got his machine, also. I left him a similar message.

I wasn’t quite ready to talk with anyone yet. I wanted to let the things I’d said and the things Ziggy had said sink in for a while. New York is an outstanding city to be alone in. You can wander around lots of places full of people and no one bothers you. Sarah’s place was on the Upper West Side. I was on the opposite side of Central Park from there and wasn’t stupid enough to try to walk through the park, but skirting along the edge was just fine.

Don’t think I didn’t notice, by the way, that in all we’d said, Ziggy hadn’t said “I love you” back to me. I noticed it but I felt like it didn’t bother me. Whether it was that he wasn’t ready, or he wanted to make me wait for it, or he wanted to wait for some moment of maximum dramatic impact, whatever, it was fine. For all I knew any reluctance on his part might have boiled down to him avoiding the cliche of saying “I love you, too.”

I know it doesn’t seem like me, but I wasn’t worried.

I spent more of my time thinking about the band stuff, and about how Digger had completely let Ziggy believe that various things were my fault or that I wanted them that way. The fact that Ziggy might have thought I didn’t want to talk to him all the time he was in rehab…? It was like he was in a different reality from me. A painful universe that wasn’t reality.

I’d have to ask him later whether he really believed I was done with him. Enough of him must have hoped I wasn’t that when I finally presented myself in a sensible way, he’d jumped at the chance to run off with me.

Part of me wondered if I shouldn’t have flagged down a cab, taken us to some other hotel, checked us in, and after all the talking was done we could have spent the night together. I hoped he wasn’t disappointed that I hadn’t. I took it as a sign of maturity in both of us that getting the business stuff ironed out was a bigger priority. I think maybe we both realized, too, that if we could get that shit worked out, we’d be seeing plenty of each other.

Besides, he’d said he’d be at rehearsal, didn’t he? I had a sudden flashback to him kissing me, once hard, once soft, and for a moment I regretted letting him go back to the Carlyle.

But only for a moment.

It was around ten-thirty when I reached Columbus Circle. I’d been walking/wandering for a while, probably an hour, and I decided to try calling Sarah again.

This time she picked up. “Hello?”

“Well, to be honest, once we saw Ziggy was there, and then that he wasn’t there, we figured you two had run off either bang or kill one another. Apparently you survived?”

“Yeah, and you’re wrong on both counts: all we did was talk. Well, okay, there was one moment of tantrum.”

“Uh, both simultaneously. But we got it out of our systems. And I also got read the riot act by Mills and Digger and jeez do I have an earful for you about them.”

“Uh huh. Which do you want to do more, tell me or go out dancing?”

“I’d much rather tell you about it.”

“Good, because having made one public appearance today already, I’m ready to order a pizza. Jonathan’s here, by the way.”

“Awesome. I’ve probably got 20 minutes walking to get to your place.”

“Pffft. Where are you? I’ll send the driver.”

So that’s how I spent my second night in the city eating greasy but heavenly pizza (my god, you don’t understand, actual New York pizza is the Food of My People and I hadn’t realized I missed it so much until I was eating it) and watching MTV and filling Sarah and Jonathan in on all the shenanigans that Mills and Digger were trying to pull.

The couch was more than big enough for the three of us. I sat in the middle, Sarah on my left, Jonathan on my right, and the empty pizza boxes on the coffee table in front of me.

“Do we know how much money is on the table?” Jonathan asked at one point. “I mean, they’re talking about some kind of multimedia development deal, that means a certain number of albums, a certain number of films, and who knows what else. Would it be a big advance like they do with multi-year, multi-album deals, or would this be a monthly stipend kind of thing like the way the old Hollywood studios had contract stars?”

“I have no idea,” I admitted. I’d done my best to parrot what Mills had said. “I’m not sure they know yet. What I do know is it sure looks to me like Digger is in Mills’s pocket, he’s not necessarily looking out for Ziggy at all, and he’s completely willing to throw me, the band, and everyone else under the bus.”

“Including me?” Sarah said.

“Ugh. Well, we’re getting ready to ditch him, I told you that, right?”

“Soon. That is assuming he doesn’t dump me first for being seen all over the city with you. Which reminds me!” She picked up the phone and left a message for someone–possibly her driver–saying to pick up the New York Post and the Daily News in the morning.

I put the question to Jonathan, “How unusual is a deal like they’re talking about?”

“Pretty unusual. But with all the mergers going on, maybe it’s going to start to be commonplace. I’ll do some snooping around, see what I can find out.”

Sarah plopped back down. “You are good at that, aren’t you!”

“So how long are you in the city for?”

I shrugged. “Sarah, how long am I in the city for?”

“How many changes of clothes did you bring?”

“Depends on how good you want me to smell, really.”

She hit me with a pillow, then.

I stayed two more days in the city, including two more paparazzi-baiting outings with Sarah. The longer I was apart from Ziggy the more anxious I got, though, so I was pretty glad to head home.

I had lunch with Jonathan in midtown before I caught the train to Boston. It was nice seeing him, really it was, and it might have gone completely without a hitch if only I hadn’t been stupid and asked him if he was seeing anyone. And he said no, and we had one of those telepathic moments like you can only have with someone you used to be that close with. In that moment I knew he meant not only no, he wasn’t seeing anyone right now, he meant he hadn’t seen anyone seriously since me. And a bunch of unspoken stuff flew back and forth between our eyes, where he saw how appalled I was, and I saw how hurt-embarrassed he was, and then he saw how hurt I was by that…

“I’m sorry,” I said, for bringing it up, and for not being the one he had wanted me to be.

“Don’t be,” he said. “I needed some time on my own. I needed to be alone to finish writing the book.”

“And I’ve been so busy since then. I know. Here I am in the city, living alone, perfect setup to see whoever I want.” He shrugged. “I’m going to Fire Island with some friends next week. I wouldn’t be surprised if they fix me up with someone.”

In other words, he was saying: don’t worry about me, don’t feel sorry for me.

I squeezed his arm, which was my way of saying I cared anyway.

Jonathan and I went together down the escalator from the street. Penn Station is underneath Madison Square Garden. Somewhere above my head was the place I’d met Ziggy’s mother. God, I had forgotten to give my condolences. Well, one thing at a time.

At the bottom of the escalator, Jonathan and I parted. He went off to catch the subway, and I made my way to the Amtrak ticket counter. As I crossed the polished floor I had the strangest feeling. I felt like I was the older one now, somehow, as if Jonathan had frozen in time and I had jumped ahead. Strange.

(P.S. I wanted to let you guys know what I did with the $100 that came in the Tip Jar the past two weeks. You know all the business about Daron trading in his milk crates for real furniture? I went to Target with the money. The books that didn’t even fit in the milk crates anymore are now in a very nice orderly shelf! So, thank you! -ctan) 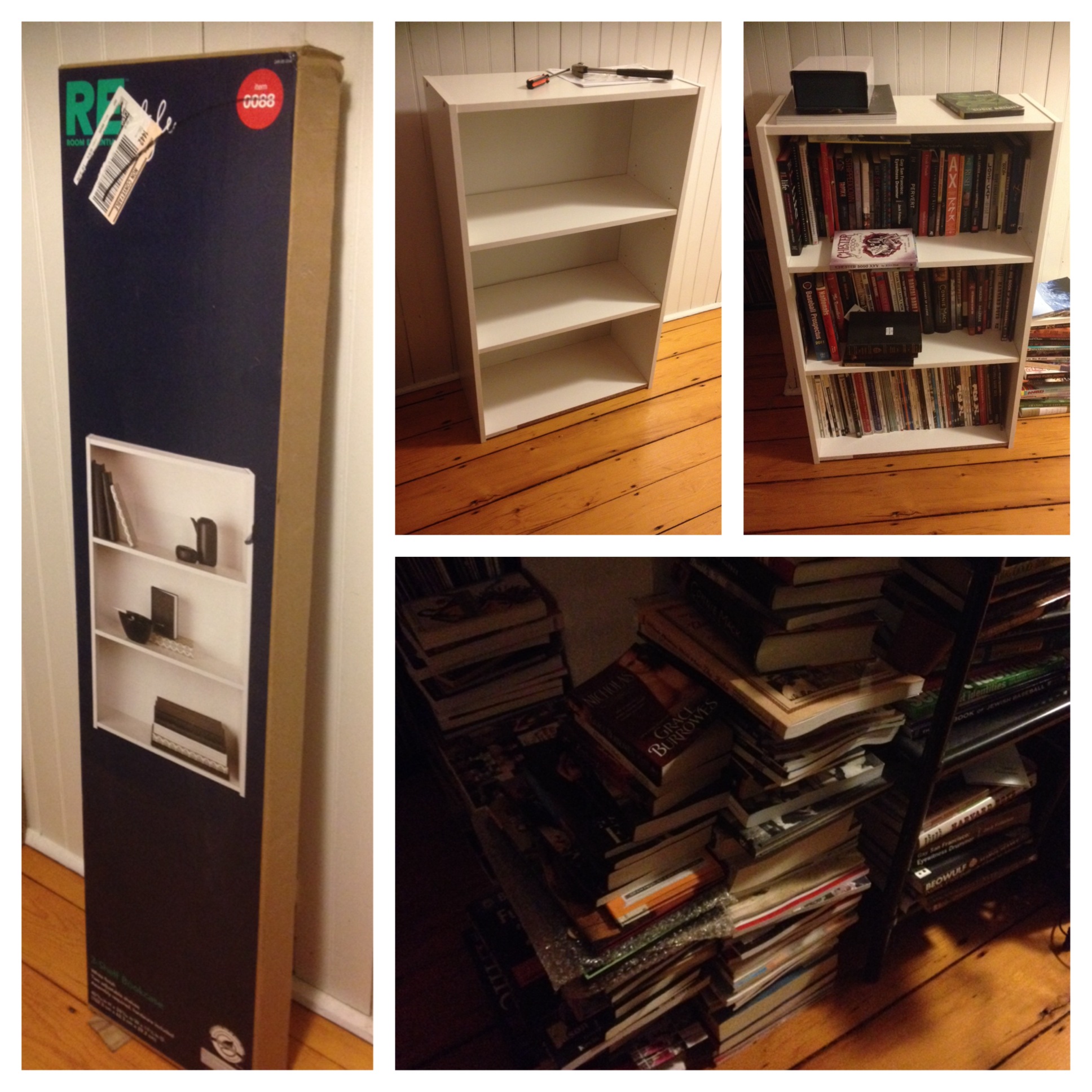