So, hit me over the head with a brick about it.

Somehow, despite ample evidence to the contrary, I was used to thinking of myself as the only gay person I knew. I in fact knew a ton of people–Ziggy, Colin, my own sister, Jonathan, Matthew, Sarah, maybe even Mills if she was right about him–but in my head queer people were still really few and far between.

I tried to work out the math. If you believe the one-in-ten estimate, well, that would mean ten percent, right? Pretty rare. And yet clearly way more then ten percent of the people I knew were not straight.

Well, I thought, maybe one-in-ten doesn’t take into account that the entertainment industry probably has a higher concentration of gay folks. And it also probably doesn’t count bisexual people properly in the first place.

Right? Did that mean my impression was less stupid? Probably not.

Especially since not only had I been oblivious to the fact that Jordan Travers was gay, I had also missed the fact that all six of us who were hanging out at his loft that night were. In fact the reason Trav picked us to come back to his place and hang out was that we were queer.

I didn’t know how to feel about that. I mean, on the one hand, I understood it, and we had a great time and I liked it. I mean, if you’re worried that I sat on the floor brooding and angsting about it the whole time let me assure you I didn’t: Trav had a guitar which as you know always fixes everything for me in social situations. On the other hand I still wasn’t comfortable being counted as part of a “group” defined by queerness.

By the way, in 1990 I wasn’t all that comfortable using the word “queer” yet. After all, I’d only worked up the nerve to start using gay not that long before, and that was what I mostly used. But sometimes people (like Jonathan and Sarah) would get on my case about using the word gay because it could be interpreted as exclusionary to lesbians and bisexuals even if it wasn’t meant that way. People seemed to be moving toward “queer” as a catch-all term that would include gays, lesbians, bisexuals, and trans people, in other words, all the people who straight homophobes would label “queer.” Except this was claiming the label for ourselves. At least according to Jonathan.

I could see why that made sense but it took me a while before I got comfortable with a word that had been tossed at me like a knife on more than one occasion. Still, I could see how it was hard to apply the word “gay” equally to me, and Sarah, and Colin, and Matthew, but “queer” was a bigger tent. So I use it now.

I probably don’t have to tell you we were up all night that night, given that it was about four in the morning when we were having coffee. The little social gathering just kept on rolling, with talking, and singing, and listening to some tracks Jordan put on from some group he was working with, and the next day we brunched. Let me tell you, nothing makes me feel more like a rock star than getting seated at the best table in a chic place despite the fact I’m still wearing the clothes I was out dancing in the night before.

Fuck existential crises. I enjoyed the company. I enjoyed the overpriced eggs and cocktails. I enjoyed not having to be anywhere or think about anything important for a while. After we ate we all walked over to Rockefeller Center to see the tree–remember when Sarah had thought she and I should do that as a publicity thing? They always put it up the weekend of Thanksgiving, so it was there to be seen. We saw it. From there we scattered, and Sarah and I ended up in a cab back to her apartment, which was when she actually clued me in about everyone.

“I wonder who else I’ve missed?” I mused, going through my mental Rolodex and trying to figure out who else was gay and I had missed it. “Trav was the last person I would’ve thought.”

“Well, not in that he was the least likely, more like he was the last person I would have thought of in a sexual context.”

“You know, you don’t have to be attracted to a guy for him to be gay,” Sarah said.

“I don’t mean for me personally.” I couldn’t think of how to explain it. “I mean more like Trav doesn’t seem particularly… is there a word for this? Kind of like forward but not forward. I guess I’m saying this is an industry where a lot of people strut around like sexy beasts and he never struck me as projecting anything like that.”

“Maybe because he’s on the other side of the mixing board.”

“No, more like because he’s discreet. Is he in the closet? I didn’t know how to ask.”

“He’s as in the closet as you and me, if that’s what you mean. It’s not public knowledge and he’d rather it wasn’t.”

“Does Mills know?” I asked suddenly.

“So how are you planning to keep your secret from Mills? Now that you’re seeing someone?”

She shrugged. I couldn’t see her expression under her sunglasses. “We’ll be as careful as we can for as long as we can. I’m hiding her from my mother, too.”

“Jeez. And have you thought about what happens when they find out?”

“Every fucking day.” She shrugged again. “If I’m lucky, I’ll end up being one of those people where it really doesn’t matter.”

I blinked. “Which people are those?”

“You can’t name any of them because the fact that they’re gay or lesbian doesn’t matter. So you don’t even remember.”

“You believe these people really exist?”

“Of course they do.”

I mulled that over, though I was not at my sharpest after having been up all night and having had a mimosa recently. “I find it hard to conceive of being outed not ruining someone’s life.”

“Which is a shame, because I think there are plenty of people whose friends and family know and it’s not a big deal, and so even though it’s not a secret, no one cares.”

“I don’t know. Speaking hypothetically: do you know the sexuality of Philip Glass?”

“That’s what I mean. Who would care if Philip Glass was gay?”

“I have no idea, I’m just using him as an example. John Adams? Steve Reich? Pick the minimalist of your choice for comparison.”

“But that doesn’t prove anything, then. Because what if he was, and came out, and it changed everything?” That really made me wonder. “Or maybe it would be generally accepted as okay for an avant garde composer to be gay.”

Sarah cleared her throat. “I guess the question might be what type of person does society find acceptably gay?”

“I don’t give a fuck about society in general, you know, but I’m pretty sure neither of us is in that group of people. You said it yourself, Sarah: you’re a sex symbol. Pretty sure that means hetero-sex symbol.”

“Except maybe if I’m sexy enough I can get away with it. You know, lots of guys fantasize about two women together. It won’t burst their bubble about me unless I suddenly quit shaving and start wearing Birkenstocks.”

“I don’t know what to think, honestly. Am I crazy for thinking that coming out is a bad thing?”

“Well, Mills found out about you and your entire world imploded, but I don’t think those two things were exactly related?”

“I don’t know, Sar’. I’ve thought about it a lot. It’s pretty clear Mills knew about me long before I knew that he knew. Maybe he didn’t work as hard for Moondog Three because of homophobia. Or maybe it was when I started being seen with Jonathan he decided to pull his support instead of trying to work with us.”

“Or maybe he didn’t do his job right in the first place and after low sales wanted to dump you, and blaming it on you being gay was the way he saved his own ego and got to pin it on you.”

“I admit, that’s the interpretation I find more likely.” I got a sudden chill. Did Artie know? Should Artie know?

Maybe that was a good question to ask Remo. After a nap. Upstairs in Sarah’s apartment she was too tired to put sheets on the couch and she didn’t have a spare blanket yet anyway. I would have happily crashed under a bathrobe, but she said no, the bed was more than big enough for both of us. It was huge, in fact, bigger than a regular king-size bed.

And the sheets were extra silky and smelled nice.

“I’m glad to have you for a friend,” Sarah said when we were lying side by side.

My eyes wouldn’t open but I could still talk. “Does that mean you forgive me for being an ass about your rhinestone-studded bra?”

(One of 1990’s top hits, a star-studded group effort of rappers against gang violence.)

Oh, and site news… did you all see this yet? 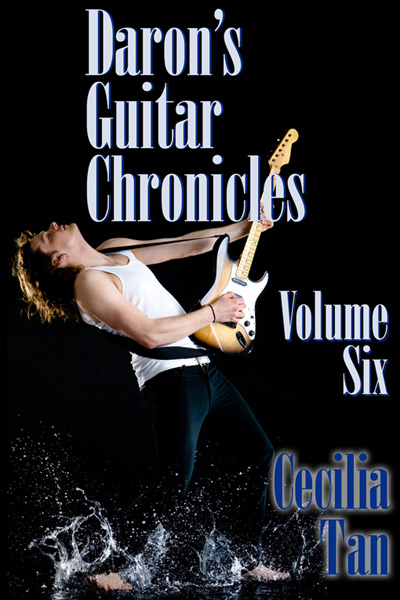 Vol 6 can be pre-ordered now on:
Amazon (Kindle)
Smashwords (all ebook formats)
with other retailers to come in the next 4-6 weeks.