If you’ve read this far in DGC (we’re in, what, volume 8?) then you love long stories, where the overarching plot takes hundreds or even thousands of pages to resolve.

In DGC, it is the question of Daron and Ziggy ever being together (in something resembling a healthy relationship). Sometimes that plotline is at the forefront, but most of the time it is barely there, while the narrative on the page deals with more mundane matters. Its tantalizing presence in the corner of our eyes is what keeps us hooked. If the Daron/Ziggy emotional roller coaster was the only topic of the story, we would have burned out long ago. If it hadn’t been there at all, the day to day life that Daron narrates would have started to bore us by now.

So, since your tenacity in following this story has proven that you like this sort of thing, I have two recommendations here for stories with a similar structure. And, like Daron, they are (mostly) free! It so happens that both these stories are dystopian scifi, but definitely not of the YA variety. Both are excellent stories that have provided me with days and days of reading pleasure:

In the Company of Shadows 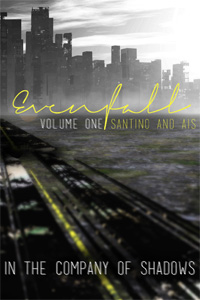 In a post-apocalyptic future, the Agency works behind the scenes to take down opposition groups that threaten the current government. Their goals justify all means, even when it comes to their own agents.

Sin is the Agency’s most efficient killer. His fighting skills and talent at assassination have led to him being described as a living weapon. However, he is also known to go off on unauthorized killing sprees, and his assigned partners have all wound up dead.

Boyd is not afraid to die. When his mother, a high-ranking Agency official, volunteers him to be Sin’s newest partner, he does not refuse. In fact, his life has been such an endless cycle of apathy and despair that he’d welcome death.

In the Company of Shadows follows these two cast-offs as they go from strangers to partners who can only rely on each other while avoiding death, imprisonment, and dehumanization by the Agency that employs them.

This series was written as a web serial over the course of more than a decade and it is downloadable as 4 volumes of over 800 pages each: Evenfall, Afterimage, Interludes, and Fade. The overarching plot line goes from ‘will Sin and Boyd ever get together?’ to ‘will Sin and Boyd ever get out of the Agency alive?’ Sonny and Ais have created a raw and gritty world populated by an extensive cast of very vivid characters, all of which they put through the wringer before dragging them to hell and back. I recommend you read this with a friend, because there will be many moments when you just need to vent at someone who doesn’t think you’ve gone nuts over fictional characters. This is dark and intense and emotional, and really good.

When you are done with this, you can find side stories and back stories on the website and Sonny has written a spin off called ‘After Midnight’ under the name Santino Hassell, which is set in the same world and features a few of the side characters. 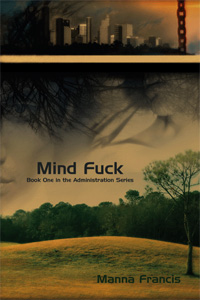 One of the worse guys is Val Toreth. In a world where torture is a legitimate part of the investigative process, he works for the Investigation and Interrogation Division.
One of the better guys is Keir Warrick, a corporate director. His small corporation, SimTech, is developing a ‘sim’ system which places users in a fully-immersive virtual reality.

Their world is the dark future dystopia of New London, where Europe is controlled by a totalitarian bureaucracy, which shares political power with powerful corporations.  The oppressive government uses torture, violence and the various Divisions of the feared Department of Internal Security to maintain power.  The corporations fight amongst themselves, using lethal force under the euphemism of ‘corporate sabotage’, uniting only to resist attempts by the Administration to extend its control over them.
The series follows Warrick and Toreth, and their families, friends and enemies as they struggle to survive and hope to prosper.

You can buy all the Administration books, but on the website above you can read most of them for free. The first book, Mind Fuck, wasn’t a 5-star read for me, personally. I loved the worldbuilding. Who can resist a good dystopia? Not me. This particular dystopia, with its totalitarian regime (The Administration) and its corporate counterpart of the Confederation of European Corporations, is absolutely chilling in all its futuristic cold-war-style bureaucracy.

“Toreth had his days filled with Chevril’s offloaded prisoners, explaining to Justice representatives why it was possible to seriously interrogate prisoners or it was possible to guarantee they wouldn’t die, but it wasn’t possible to do both. Or rather that the guarantee wouldn’t make them any less dead if things went wrong, which was why he sure as hell wasn’t putting his name on it. The representatives listened and nodded, and went back to their superiors and returned the next day with a carefully reworded demand for exactly the same impossibilities.”

I loved the characters. Toreth — is he or is he not a sociopath? — with his distinct lack of empathy for anyone but his admin assistant Sara. And Warrick in all his icy superiority, except in bed. But I didn’t feel the connection between the men in Mind Fuck. That may have something to do with my lack of enthusiasm for most things BDSM-related, but I think it is more because there is no emotional connection between the men at that time. And yet, at the end this series ended up on, or near, the top of my all time favorite m/m reads. Despite the BDSM, yes.

All that fangirling about ‘best series evah!’ starts with the story Pancakes. Whenever anybody starts this series and is making ‘I don’t get it, what’s the big deal, I’m not really liking this’ noises, we, the veterans, impart the following bit of sage advice: Keep reading until Pancakes. If Pancakes doesn’t change your mind, you can quit.

The overarching plot line in this series is less relationship focused. It is more of a question of ‘will Toreth rise above himself or not?’ There is a group of readers who think that there is nothing wrong with Toreth, that he is just a gigantic jackass and he should shape up and if not, Warrick should dump him already. These readers tend to get very frustrated with this series, because Toreth never really meets their romantic ideals. And then there are the readers who accept the premise that Toreth is flawed and will never act like a normal human being. They rejoice in every little victory over Toreth’s conditioning and end up loving these books.

As I said, you can get most of the stories for free at the site linked above, but there are 8 books published as well. The first 7 books contain these free online stories, with a few (not essential) extra stories thrown in (Mind Fuck and First Against the Wall are full length novels, though, and have no extra stories). The eighth book has recently come out (after a hiatus of several years) and is not available for free online. Book 9 is apparently coming out soon, too!