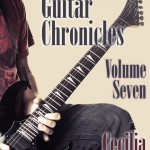 (The DGC book 7 ebook releases today!! Get it on Amazon, B&N, or Smashwords, and join us tonight for book chats! 8-9pm eastern right here on the DGC Site Chat Room and then 9-10pm on the Cecilia Tan YouTube Channel! Post your questions for Daron or me below! -ctan)

The oh-my-god-what-ARE-we-going-to-play panic finally hit at about four in the morning when we were stuck in traffic on I-10 westbound. There had been some kind of accident and even though it was the middle of the night cars were backed up for miles. It wasn’t moving at all. The panic was like in those dreams where you have to take a final exam but you have no pants or you didn’t learn the instrument your recital is supposed to be in. Except this was real.

And as dawn broke and I realized where the hell we were–so damn close to Betty Ford–and that we were basically retracing my “drive from hell,” that time I gave myself heatstroke after trying to go pick him up…

I felt ill. Absolutely ill. I almost wished I could go into the head and puke my guts out but it was like I was caught in that awful painful stage right before that where you can’t make yourself throw up but you can’t relieve it, either.

I curled up in my bunk in a ball of mental, physical, and emotional anguish, flipping back and forth between praying that the traffic would be so terrible I’d be late and have to cancel and praying that it would clear up and we’d get there already.

This is stupid, I tried to tell myself. Nothing is making you feel this way but crap inside your own head. There’s no one here beating you with a baseball bat. The person you love made it happen so you could see him in LA. You should be happy.

It didn’t work. That only led to: Why the fuck aren’t you happy? Ingrate. Idiot. Fuckup. Worthless.

You probably recognize the pattern by now even if I didn’t at the time: anxiety and depression coming hand in hand like twins in a horror movie. I kept trying to think my way out of the downward spiral and that just seemed to lead to more and more negative thoughts.

Sometimes when the pain is bad enough, you’ll try anything to do something about it. I convinced myself if I could just sleep for an hour everything would be fine. I’d wake up and we’d be pulling up to the hotel and I’d be refreshed and calm. So I drank a goodly portion of a bottle of Jack Daniels (I didn’t measure or even use a glass actually) and put myself back to bed.

I did manage to pass out for a little while, and when Martin shook me awake we were pulling up to the hotel. I don’t know if I’d call myself calm though: more like I was so hungover I was nearly dead. Flip crushed some Excedrin into a bottle of Gatorade for me, I drank it, threw up more or less immediately, and then he did it again and that time it stayed down.

Flip. What a pro. He stuffed me into a limo, stuck the Ovation into my hands, and gave me a small salute before shutting the door.

I turned and saw Ziggy sitting there, completely made up, his cheeks perfectly smooth, his hair slicked up so that a daring curl beckoned from the center of his forehead. A skinny man in a sharp suit was on his other side–Barrett Thomas. They were both staring at me like I looked like I was in danger of throwing up all over their shoes. I glanced down to make sure I was wearing clean clothes. I was. (I’d changed after the earlier incident with the Gatorade.)

Ziggy shifted tentatively into host mode. “Barrett, I believe you and Daron have met before. Haven’t you?”

“Pleased to make your acquaintance again,” the manager said, reaching out a hand, which I shook firmly. I hoped my hands weren’t sweaty.

“Thanks. Likewise.” I forced myself to scoot back in the seat so I wouldn’t slouch quite so much. My head was throbbing but it was feeling less like pain now and more like my entire body was one big heartbeat of Ziggy, Ziggy, Ziggy. I closed my eyes for a second, trying to focus. I did focus. When I opened them again I said, “So what are we playing at this radio station? That song, you do realize we’ve never actually played it, right? I laid down that riff like six months ago.”

Ziggy chewed his lip, which was a very dark purple shade today. Eggplant black. “I figure we ask them to play it from the recording as the lead in to us talking.”

“I’m not up for talking. You do the talking.”

It was clear he didn’t have any other suggestions. “Fine. Let’s do ‘Walking’ which I know I can do in my sleep and which will sound fine if we improvise the shit out of it,”—after all, it was straight blues—”and then we’ll talk some more and do ‘Candlelight’ to finish. Because that’ll be the song everyone expects and if I can’t play it from memory despite not touching it in forever then it proves I’m just dead inside and should jump in front of a truck instead of trying to make this work with you.”

No wait, I didn’t say that last bit, I merely thought it. What I actually said was “…and if I can’t play it from memory then you’ll know I’ve really moved on.”

The effect was the same either way, I think. “Okay,” he said, agreeing quickly with nods and his palms pressed against his knees. “Okay.”

Barrett gave him a sidelong look, like he was surprised by something.

I won’t keep you in suspense. The gig went exactly the way I laid it out. They made Barrett and Tony wait outside the studio, but we could see them hovering and looking through the big Plexiglas windows, and I made the radio people seat me and Ziggy so we were across from each other, looking straight at each other, and that was how we got through it.

I want to be able to tell you there was magic, playing and singing with him again, and there was. There absolutely was. But I wasn’t able to appreciate or enjoy the moment very much because the feeling that an axe was about to fall down on my head at any moment was so strong. Most of my mental energy and attention were going toward staving that off and what was left grooved nicely through the two songs. My fingers remembered what my brain didn’t. I even went back to playing with a pick just to keep muscle memory intact. Later in life I’d hear those recordings and think it sounded pretty good, but at the time all that mattered to me what that it was adequate to the job.

I allowed myself to be buoyed by all the noises of approval that Barrett made afterward. We made our escape from the radio station without incident: they’d kept it enough of a secret that there were only a small handful of crazed fans at the door and it took only a few minutes for photos and autographs to sate them.

Barrett then offered to take us out for breakfast. I declined by explaining I hadn’t slept and that my stomach wasn’t taking incoming deliveries right then.

So the limo took us back to the hotel.

All I know is I got into a bed that smelled like Ziggy and was unconscious before he could even climb in after me.