Getting a tattoo hurts. It hadn’t really occurred to me what was involved exactly. It means someone with a needle is jabbing you so many hundreds of times a second with it that it feels pretty much like they’re taking a jack knife and cutting right into your skin.

At least, that’s how it felt to me. The guy who did us both reminded me a little of Colin, only more rockabilly than industrial, tall and lanky with his hair gelled up but not all the way to mohawk level. His name was Matt. 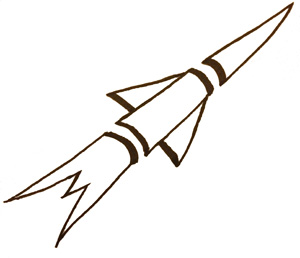 When Ziggy drew the rocket onto my upper arm the moment felt so intimate I almost wanted to ask the artist not to watch. Matt seemed like a decent guy, though, and I didn’t want it to seem weird. But Ziggy knew. He met my eyes. He’d put on full eyeliner to go out and we looked at each other.

I’ve said it before, I’ll say it again. I do some of my best talking without words.

One cool thing about Matt: he definitely did not give a fuck who we were. I liked the fact that you didn’t see any autographed framed head shots or band photos on the walls of the place. This was not a celebrity ass-kissing kind of place.

Mine took about 45 minutes. All black ink except for a tinge of red on the flames of the rocket and along one side. And like I said, it hurt. But I can put up with almost any pain for 45 minutes. It wasn’t as bad as getting a cavity filled. 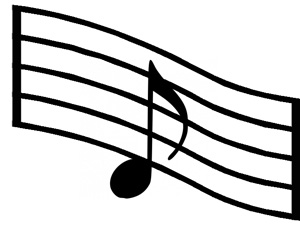 Zig’s is like this, but with more of a bend/wave to the staff.

Then came time to do Ziggy. Ziggy pulled his shirt off and sat down in a massage chair so he could rest his chest on it. The artist applied the design with a purple “ditto” transfer that Ziggy had drawn on earlier. There was much lining it up on his shoulder blade with mirrors and then Matt stuck it down and peeled the paper off, leaving the purple design sitting on his skin. Matt then set about filling in all the purple with black ink.

Ziggy was leaning on a massage chair and he grabbed my hand with his right hand: the tattoo was going onto his back at the base of his neck.

“Once the endorphins kick in that’ll take the sting off,” Matt said.

Ziggy nodded and gritted his teeth.

About an hour later we were done, and Ziggy was too endorphin high to drive, so I drove, and we listened to the radio and sang along while driving around with the windows down.

“Didn’t we just have tacos?”

“Three hours ago,” I pointed out. “I am a little thirsty.”

So I drove us to a deli that Jonathan and I used to go to. I told Ziggy this while we were looking at the menu. “The office where he worked was near here and so sometimes I’d go do a studio gig in Van Nuys and then meet him here.”

The waitress came then, and Ziggy ordered a piece of chocolate mousse pie and a cup of coffee. I ordered a bloody mary.

“Sounds very…nice,” Ziggy said, referring to me and Jonathan.

“It was, if by nice you mean domestic. Turns out I wasn’t so good at domestic.”

“What, did you burn the kitchen or something?”

I’d never explained it quite like that, and it was a huge oversimplification of everything, but it got the point across, I guess. “That doesn’t sound like much fun.”

“It wasn’t. We were both workaholics and then Hollywood screwed him over royally anyway.”

It was easier to talk about how someone else’s artistic life was derailed and crushed by corporations and committees than our own, so I told him all the gory details i could remember. “But although it ended kind of miserably for him, and for us as a couple, in the end I think it was the best thing for him that the TV show didn’t work out. Because now he’s been able to actually write the novel he always wanted to write. He can kill off whoever he wants to without worrying that some actor has a contract.”

“Novelists like to kill off characters?” Ziggy asked, licking whipped cream off his spoon in a not-at-all suggestive way.

“Apparently it’s pandering to the audience to let everyone live?” I said. “And therefore killing off a character is some kind of hallmark of literary genius. Or so I gleaned from listening to him talk at parties. Dunno, sounds kind of like a downer to me. J. said it was bullshit but as a fiction writer he was in the bullshit business so he had to pay attention to that kind of thing.”

“Well, but people do die,” Zig said, digging into the pie. “It’s not realistic to never have anyone die.”

“True, but I don’t think people read fiction because they want everything to be the way it is in real life. They could just look around them, then.” I sipped the bloody mary and resisted the urge to pick at the bandage on my arm.

“Well, but you want it to be realistic, just maybe not the real life of the person who’s reading it. Someone else’s life, maybe.”

“I guess. I wonder when the book’s coming out? Or if it’s out and I missed it. He probably emailed me about it, but I haven’t read email since hitting the road.”

“Which reminds me,” Ziggy said. “I have email now, too. But yeah, I can’t exactly check it all the time. Barrett lugs a laptop around with him but you should see what he goes through trying to connect from the phone line in a hotel sometimes.”

“So that place in the West Village, is that your home base now?”

“For at least a year. Lease runs out September 1st.” He shrugged. “Who knows if I’ll be on the road then or not?”

“I know I will” I said, sucking the last of the tomato juice out of the bottom of the glass with the straw. “Nomad’s second leg runs July 21 through the second of September.”

“Let’s not talk about that now,” he said. “I mean, unless you really want to.” He waved a forkful of chocolate pie at me and I took it carefully between my teeth. “That’s kind of fascinating, though, that you broke the tour up into two pieces like that.”

“Remo’s got the clout and the money to do it, I guess. Having the time off is easier on the band. Remo says he doesn’t really like to do more than 6 or 7 weeks in a row without a break.”

“Huh.” Ziggy’s eyes were on the tabletop and I got the feeling he was taking mental notes.

Then he looked at the time. “We’ve got about twelve hours before I have to drive you to San Diego,” he said.

“I’ve been to L.A. like a hundred times and you know what I’ve never done?”

“Besides get a tattoo?” I asked.

“Besides that. I’ve never touched the Pacific Ocean.”

“That seems silly.” I was trying to remember if I had. “I’m not sure if I have or not. No wait, I have. In Santa Monica. The beach is nice there.” I waved to the waitress to try to get our check. “Let’s go.”

“To the beach. Or somewhere you can stick your toe in the ocean.”

So that’s how we ended up driving up and down the Pacific Coast Highway until dawn. I’m not even sure where we were when we touched the water but that hardly matters. There were cool, wet pebbles and the sound of surf, and he was there. Sometimes it’s the journey, not the destination, you know?

—
(Updated review counter below! Here’s how we’re doing in the reviews campaign. Remember, when we hit 20 reviews on ALL the ebooks we’ll release the Daron-Ziggy-Colin scene to everyone. Until then, email me your review at ctan.writer @ gmail.com with your 18+ age statement and I’ll email you back the scene for your “personal enjoyment”! -ctan)