(See bottom of the post for the Cover Reveal of DGC Volume 8!)

For someone who neither plays a sport nor goes to see sporting events, I sure have spent a lot of time in sports arenas, haven’t I?

George came striding past us quickly, the keys hanging from his belt loop jingling. He clapped me on the shoulder as he went by. “Gonna roll in about fifteen,” he said.

In other words, I needed to get on the bus. I turned to Ziggy, who was still holding my hands. That’s right, I didn’t drop them just because somebody came down the hall.

For the moment we were alone again, though. And the topic of discussion was still “us.”

“I’ll tell you this,” Ziggy said. “Right now you’re more important to me emotionally than anyone else in my life. My mother’s gone, Barrett’s obviously important and we have an excellent rapport but you know, that’s on a different axis, a different scale of emotion, you know? Janessa, well, I told you, I broke it off with her and that is not my baby. Jennifer’s still a friend, but we’ll always be exes. Sarah’s a great sympathetic ear and we’re so simpatico, but come on, there’s no comparison between you and–”

We blinked at each other for a second. “Yeah, Sarah,” he said. “Remember, she introduced me to her vocal coach? And we went out to dinner that time? And she invited me to her Christmas party? And she hangs with Jordan’s crowd at Limelight like I do?”

When he put it like that it was really obvious, but somehow it hadn’t occurred to me that they were quite that close. For half a second it threw me for a loop, as I had this stupid thought: wait, but if she’s your friend, too, whose shoulder am I going to cry on the next time you break my heart?

In the next half-second, though, I thought that was a really stupid thing to think, and in fact it was really a good sign that we had so many people in common outside of our actual (former-)bandmates. Sarah and Jordan both. “Right,” I said. “Right, sorry, I just…hadn’t realized you were that close. Anyway, you were saying?”

“I was saying you’re the most important person to me, emotionally, that there is. Right now.”

Right now. This time I heard the emphasis on those words. “That sounds…a little like an ultimatum. Like you don’t expect it to last.”

“I know. I don’t mean for it to sound like that. But going back to something we said back at the hotel. Daron, I need…something. If you’re not coming on the road with me, if we’re not going to be part of each other’s work lives, I need something to feel connected. You worry that I’m going to get distracted and fall in love with someone else because I’m lonely? Hate to say it but…you’re kind of right. If I feel like you’ve forgotten about me, like you’re moving on, do you see how hard that can be for me?”

“It’s one thing for me to think that. It’s another to feel it.”

“What can I do?” I felt my heart pound. Such an open-ended question, but I wanted to ask it, and I wanted to hear the answer, to know there was something I could do. It was always terrifying giving Ziggy carte blanche because I never knew what he might demand…

“Well, for one thing, you could call me.”

“It doesn’t have to be everyday or something. I’m not that weak,” he added hurriedly. “And I know there’ll be times when we don’t connect. But when I feel like you’re trying, that means a lot even when I don’t talk to you.”

“It hadn’t occurred to me that an attempted phone call could be as important as actually talking.” I would’ve thought frustration would be worse, but I guess not. “Maybe I should get a pager, too, while we’re on the subject.”

“Because the thing is, if you can try to reach me, and what you need is to feel like I’m making an effort to care about you…”

I trailed off but Ziggy closed the logical loop: “Then I can call you to talk to you to remind myself how much you care instead of spinning my wheels and convincing myself you don’t.”

I needed to look into his eyes, so I did. “You convince yourself I don’t?”

“Only when depression is really bad.” He winced and squeezed my hands hard then, as if saying that hurt like he’d dropped a hammer on his foot.

“Off and on. Mostly off. I’m on a much, much better anti-depressant now.” He winced again.

“Were you afraid to tell me that?”

He nodded, tears welling in his eyes suddenly. I felt myself tear up reflexively.

His words came out in a rush. “I don’t want you to think I’m crazy.”

I hugged him hard, then. Very hard. “You know what? I love you even if you are crazy, though.”

He sobbed against my shoulder. “I’m not. I’m not. But sometimes I question myself.”

“If you’re questioning yourself, you’re probably fine.” I kissed his hair, his cheek. “If you’re staying off painkillers, too.”

“I am. I am.” He held my face in his hands. “I know you…moved to L.A. to be near where I was institutionalized. I know you didn’t give up on me. But when depression dips low, I worry that this time, this time you’ll decide it’s too much and move on. That everyone–but especially you–will decide my insanity is not worth it and move on.”

“You’re not insane, and you’re worth it,” I said, because I didn’t know what else to say. “And if me calling you a couple of times a week helps you remember that, then I’ll try to do that.”

“It sounds stupid, doesn’t it? It sounds too simple.” He clung to me and I worried for a moment that this conversation was going to leave him on a downward spiral.

“I don’t care if it sound stupid,” I said. “Sometimes the simplest things are what fuck up a relationship. Maybe sometimes simple things can be the solution, too.”

“Hm, that makes sense.” He let out a long breath.

George yelled down the hallway. “All aboard who’s comin’ aboard!”

He mashed his cheek against mine, his voice in my ear. “I’ll… I’ll see you in New York. Soon.”

“I’ll see you in New York,” I echoed, as I kissed him on the cheek and then started running down the hall. “And I’ll miss you until I do!”

The bus began to move the moment the door closed behind me and I went directly to my bunk rather than subject myself to any ribbing over being the last one on.

I don’t know who Ziggy must have conspired with–could’ve been Flip, or Fran or Clarice, or even Martin–but waiting in my bunk was a stuffed unicorn.

I named him Miles.

COVER REVEAL!
I decided that for this book maybe we should show a little skin on the cover. What do you guys think? -ctan

And here’s the full paperback version: 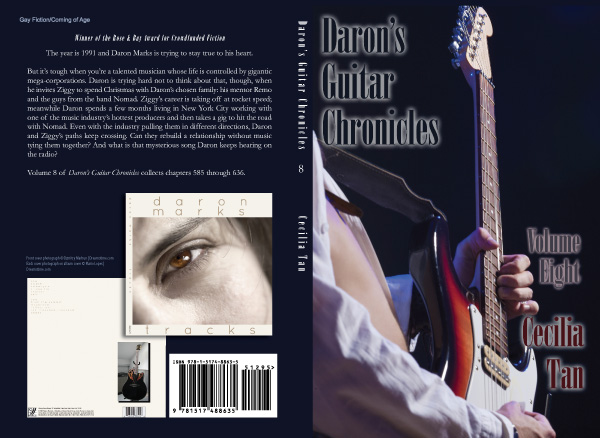 Can you believe all these books? 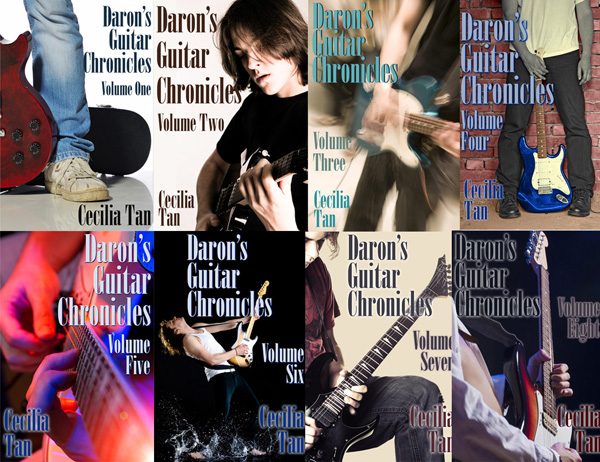 LAUNCH EVENTS: WEEK OF NOVEMBER 10th
• Bloggers: Sign up to be part of the launch to host an excerpt, Q&A, guest blog, review, etc here: http://rockstarlit.com/content/darons-guitar-chronicles-volume-8/
• Mark your calendars for the next chat with Daron (and me): November 10 8-9pm in the chat room (See the popup in the lower right corner of your browser screen!)
• Also Nov 10th: I will livestream from 9-10pm eastern for book launch of Vol. 8. (Direct Youtube Link: https://www.youtube.com/watch?v=y0vzienFR-g)