I don’t have too many illusions about being a “good son.” I mean, I am pretty sure I am not one. That doesn’t mean I’m not a good person–that’s a whole different discussion. When you talk son or daughter, though, you’re talking about a very specific thing, and that’s how you relate to your parents. It’s really about what your parents think of you as you relate to them. Isn’t it?

But of course your two (or more, I don’t judge) parents may not agree on either what makes a good son or whether you meet the criteria.

I wish I knew why it mattered to me.

Claire fell asleep in the car on the way back from the mall. When your body’s fighting something it’s better to be asleep than awake, right? She was disoriented when we got back to the house, and Remo had to sort of steer her down the driveway and up to the door, one arm around her shoulders and one hand on her arm.

I’m not sure she really knew where (or when?) she was.

Back at our hotel, after we’d brushed our teeth, while Ziggy massaged his nightly cream into his face with tiny circles of his fingers, I sat on the toilet lid and said, “Do you really think Remo’s being ridiculous?”

Ziggy didn’t bat a literal eyelash. “I think you think Remo’s being ridiculous. What made you think I thought that?”

“Your whole thing of this would be like if I went to take care of Roger when he was dying. That thing.”

“Well, maybe it’s not a direct analogy. For one thing you and Roger were never in love.” He glanced my way as if looking for confirmation.

“God, no. Not even close. I’m not even sure we ever really liked each other.”

“Yet you were in a band together.”

“Yeah, well.” I shrugged. “It’s funny. Bart used to harangue me about how we should take out a classified ad looking for a new singer and I was like ‘no.’”

“Why were you against it?”

“I even said something like you wouldn’t want to meet your future wife through a newspaper ad, would you? Someone you are going to spend a lot of time with and be intimate with? And he was like well, just going with the people we know isn’t working. But what I couldn’t figure out how to say then was that things not working out with Roger was how I knew I had to find someone I was compatible with. And I didn’t think the classified ads was the way to do that.”

He paused in his face-treatment to look at me. “And then I jumped out of the crowd in the park one day.”

“Mm-hmm.” I leaned my elbow on the edge of the counter around the sink and put my face against my fist. “Jonathan called it love at first sight.”

I saw him start to stiffen, to armor himself. I don’t think I would have noticed something like that before. Was it that Ziggy tried harder to hide it before or that I knew him so much better now? Then I finished my sentence.

“–so I guess maybe it’s big enough to encompass all of the everything I feel for you.”

He broke out in a smile. “You’re writing corny song lyrics even when you aren’t trying.”

“Going to go write it down?”

“No. I’m going to sit here and stare at you while you stare at yourself. We may as well both enjoy it.”

He laughed and jokingly bopped me on the nose with a swipe of face cream and then went back to grooming himself as contentedly as a cat.

I went back to feeling the mid-level melancholy that I’d been feeling since we said goodnight to Remo. You would have thought that Ziggy, being the goth in the family, would have been the one to mope around thinking about death… but then again it wasn’t his mother who was dying.

It made me think about things like what a life was worth, or what life meant. Was Claire thinking about those same things? Or was she avoiding thinking about those things? It was hard to tell if all her talk about dying was really her facing her mortality and which was just it was the biggest and most convenient reason ever to be the center of everyone’s attention.

“Attention whore” is a phrase that gets thrown around a lot. Ziggy often used it for himself. But Ziggy had a way of making slurs and insults sound like some kind of tribute when applied to him. I didn’t find myself comfortable applying the term to Claire, but, you know, the people who originally made that term up to be a slur were probably thinking about people exactly like her. Mostly women, but…

“Yes?” he said with a lilt. He’d moved on to doing something to his eyebrows with the sides of his thumbs. “From you, you mean or in general?”

“Um, both, but I guess I’m talking about in general.”

“The whole… feminine aspect thing…” I was feeling my way through the thought, trying to find words that made sense. “There’s a kind of thing, of being in the spotlight, of attracting the spotlight, I guess it’s a social human thing in general?”

If Jonathan were here he would have had a handful of five-dollar words to explain the concept. But he wasn’t, and I made do with the loose change in my brain. “Maybe it’s society or social training, right? But when a woman walks into the room all the heads turn because if she has applied all the feminine aspects to herself they’re all attention-getting. Pretty hair, bright colors, frilly dress, whatever: it’s all about being made to be looked at. And so people look.”

He sensed that I was getting deep into something. He made agreeing noises and took me by the hand and pulled me over to the bed while I kept talking.

“So I guess that’s what I think maybe I understand now? If you really want to grab attention, everyone’s been trained to look at the feminine. Am I right?”

“You may be onto something, a little,” he allowed as he draped himself across the bed. “It may be chicken and egg, but…” He trailed off and lay his head on the pillow. “I mean, do I cloak myself in a somewhat feminine aspect because it is attention-getting? Or is it just a happy by-product of the fact I’m like this?” He licked his lips. Attention whore. “Or is it that whatever one does that is attention-getting is automatically labeled feminine? Like real men aren’t supposed to ‘want’ attention.”

You know Ziggy could say the word “want” in the middle of any sentence and if he dragged it out just that tiny extra beat, he could send my antenna up.

Okay, not my antenna.

“This is just one way to be queer,” he said. “One way to go against what society wants. One way to run counter to the conformity.” He stretched and the faded T-shirt he’d put on to sleep in rode up and exposed his abs and ribs above the waistband of his pajama pants.

“Conformity is a buzz kill,” I said, but my brain was already disengaging from speech mode and shifting into sex mode, so the words were kind of on autopilot.

It was such an easy relationship dynamic. He said come and I did. 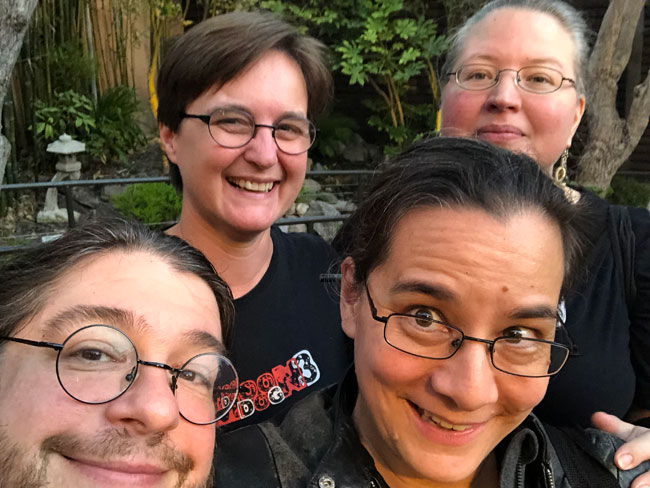 DGC Meetup photo! This is us after two pots of tea and a smorgasbord of dim sum delights at the Imperial Tea Court in Berkeley, where we nerded out about MCU fanfic and Pokemon. From there we walked to a gelato place that, to our horror, we discovered did not use real sugar. So we walked to a *THAI* gelato place another two blocks away that was absolutely delicious. And then on our way back to where we were staying, corwin and I ended up meeting our host and another writer some of you may know (Laura Antoniou) at a speakeasy-type craft cocktail bar and so I’m posting this at 1am with rather a higher blood alcohol level than usual.

I wrote this chapter this afternoon at the cafe inside the Berkeley art museum. I thought it was going to be a plotty one and that when Daron started introspecting about what his parents think of him that it was just his usual throat clearing before he got down to business. But he had other plans and wanted to put in some relationship processing. So there you go.