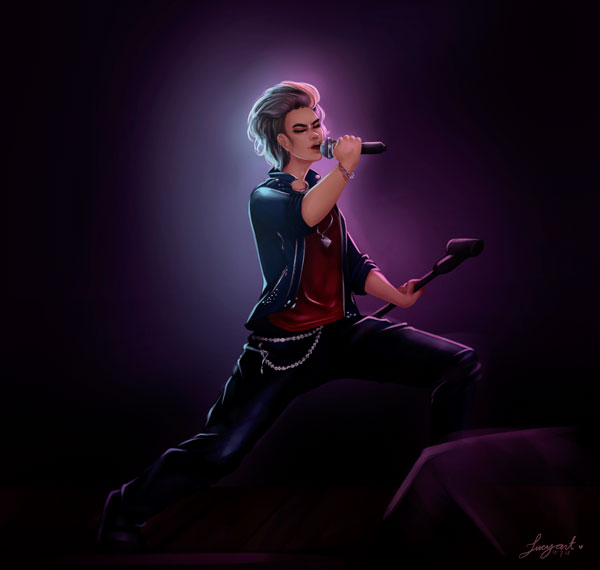 Funnily enough, when I gave artists the choice between drawing Ziggy or drawing Daron, they tended to choose Ziggy. Not that I (or Daron) mind that at all. Ziggy’s very pleasing to look at. 🙂

I have another really really old tidbit for you guys now. This is the first time I tried to write Daron in the first person. I had graduated college and was still living in Providence with my boyfriend and two friends of ours, and commuting to Boston every day on the train to work a book publishing job. Here’s the entirety of my journal entry from January 10, 1990, in which I rewrite a scene I’d written about two weeks earlier except I take it out of 3rd person POV and start developing Daron’s voice for the very first time. I’m putting it here as I typed it, with typos and the wrong “you’re” and everything:

Goood morning, it’s Wednesday, JAnuary 10, 1990. I am still incredibly tired, had trouble getting to sleep again, and I wish I had batteries in my walkman. At least I have some cash because Jana paid me back for the phone bill. So I’ll get some at CVS or something.

I’m frustrated. Frustrated with Daron and with Antilles [another character I was working on at the time -ctan], and I feel so far from all the others right now that I’m too far to even feel frustrated about them. Lately–the past 2 weeks or so–I have really felt like writing, that anxious feeling that puts a surreal film over everything forcing me to peer through multiple sets of eyes… I feel like if I don’t write something I’ll burst. I’m hungry to live eat and breathe through someone else, and I want to do something with these novels. Why can’t i? I seem to have a block, too, keeping me from doing anything, concentrating on anything. As I try to sleep I often visualize one thing or another, scenes and situations usually come easily, and I pick one to firm up and fill out, but then I fall asleep. lately, though, it has been difficult both to get anything clear out of the jumble of thoughts in my head, and difficult to sleep. And I sat down the other day, deciding to draw something, with bristol board and pencil, but, then I just sat there, lost for a subject. And I’m tired. TIred and/or sleepy, so it’s hard to make the time to do anything written–and even then I have the same problem. That’s why I’m writing this drivel now.

OK, some nuts and bolts problems. Daron. I’m still having trouble with POV, and I can’t bring myself to make it first person. And… crumbs, I’m falling asleep. Better do it.

Ok, I have been diddling around long enough. Let’s see if we can do it. Write Daron in the first person.

Ziggy hummed something out of tune and Bart noodled and noodled somewhere behind me. My unfocused eyes never moved as I unhooked my shoulder strap and let it fall to the floor with a gentle slap. I felt like sinking down, following it to rest on the worn wood floor, but I sat back onto a stool instead. “I’m calling it a night.” I held the guitar by the neck in my right hand, nicking the floor with the endpeg. “I’m bushed.”

“Don’t forget,” Ziggy said, his head so close to mine his hair brushed my ear. “We’re meeting Justin tomorrow.”

“I won’t.” He was already gone, now over by Bart who noodled still, putting note after note in some pattern that only he could hear. But I could still feel the warmth of his breath in my ear and goosebumps sprouted all over me, a big one in my jeans. I yanked the collar of my denim jacket up, slid the guitar into a flat black case and slipped out the door. I saw Bart stand up, come toward me, but I closed the door behind me and then I was alone in the alley.

I take it back. There was a stranger in the alley, who looked vaguely familiar. “Don’t call me that. Call me, Daron.”

“Ok, Daron. I hear you’re looking for a drummer.” He stepped forward, flicking his cigarette into a puddle. Then hunching his shoulders, stuffing his hands into his pockets, like he was wary of approaching me. “That true?”

He shrugged. Was he here to try to sell me drugs? Or…

“Look, do you want an audition?”

A small smirk played across his lips. “I have some questions first.”

I tried to firm up in my mind what Ziggy and Bart had agreed on about terms and such. “OK, shoot.”

“Well, first off, do you always come out of the studio with a hard on?”

I tried to take a step back, but my legs didn’t work quite right, I stumbled. So he wasn’t here for drugs. I was about to say something, what exactly I don’t know, when he took his hands out of his pockets.

“Sorry,” he smiled, looking down. “I just couldn’t resist.”

“Get to the point.” I wanted to put the guitar down, I wanted to get out of that alley, among other things. “I don’t like flirts. Do I know you?”

“Yeah.” the hands in the pockets again. his hair was dirty blond, straight as a rail, long in the front but short on the sides. “This is the real color.”

“Look,” I stopped glancing at the studio door. “You want to get something to eat?”

I led him around the corner to the donut shop. We trod silently past the two cops at the counter, to a booth in the back. We stirred our coffees and talked about people we knew in common. He was actually a friend of a friend of Bart’s, and he did actually play drums, but he told me he was “partially committed” to some other friends. Which was fine because we had plenty of people trying out. Then some of the guys from Triangle West came in and we yakked for a while with them. They’d just played a gig at the CLub COrner and bitched endlessly about the sound there. Which was fine with me, the sound always sucks there. Then they left, and Alain began telling me about a good record store in Oldport.

I was beginning to think he had chickened out when the conversation suddenly turned to the question of crash space. He was staying with the mutual friend of Bart’s on the North side. And I said “I live ont he East Side. Why don’t you crash at my place?” And then it wasn’t in what he said but in the way he smiled that let me know I was right about him.