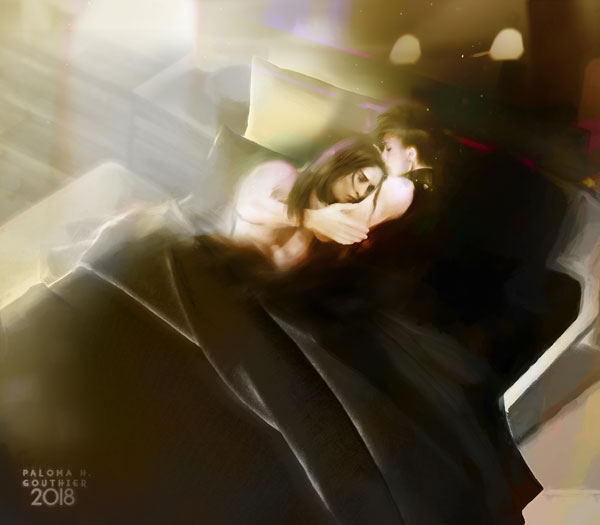 Do you see a little angst in this image? Daron and Ziggy in Ziggy’s apartment in New York. It doesn’t match the description, but does match the emotion in this scene:

The only light in the apartment came from the streetlights and the bluish glow of the numbers on the VCR. I could see no colors at all.

A few feet away, Ziggy slept in the grand centerpiece bed, under a snow white duvet, his closed, lined eyes and tousled dark hair like slashes of urgent calligraphy.

I didn’t want to wake him. But I knew I shouldn’t just stand there at the window having a downward spiral, either.

Think about it, I told myself. The last time he felt like this and didn’t come to you? Look what happened. Don’t let that happen again.

In that scene, Ziggy comforts Daron in his time of crisis, in his failure of confidence. My goodness, how far they’ve come.

Now, I promised something from the old old old archives. I dug this out of my journal. It’s dated April 14, 1988. I was still in college and this was my first attempt at writing Daron and Bart’s first meeting. It’s written in third person, how weird is that?

“You’re nuts, you must really be nuts,” Daron was telling himself not for the first time that day. Eighteen hours ago he had left home on a bus. Ten hours ago it broke down. Eight hours ago he hitched a ride. Four hours ago he made it to the city. One moment ago, he had opened the door to his new room.

Daron had never been in a dorm room before. In one corner of the cubicle was a bed and a chair. On the floor next to his belongings lay a pile of papers. The top one read:
WELCOME TO THE CONSERVATORY OF MUSIC. Something something something.
He scooped up the papers and deposited them and himself on the striped mattress. The room seemed even emptier from that side. His pile of things which had seemed so large on the trip, as his aching arms would attest, now seemed small. “Unpack,” he muttered. He had carried three things with him. A small suitcase, a backpack and a guitar case. In the suitcase were clothes–it went into the closet space. Out of the backpack came a portable stereo, and out of the case, Daron’s whole reason for the trip, along with a folding music stand. The stand had been a gift from Remo, who hadn’t needed it much since he’d gone on tour.
Thinking about his old friend inspired Daron to play something, but as he was searching the baseboards for an outlet, the overhead light fizzled out. Feeling his way back to the guitar case, he fished out a black flashlight. Once it was on, he set up the music stand, and hung the light from it. He opened his manuscript book underneath the beam. “Now we’re in business, again.” He began humming as he plugged the speakers into the body of the stereo, the stereo into the wall, the cord into the guitar, the guitar into the stereoSCREEEEEEEEECHthe sudden wall of feedback made him jump. The neck of the guitar bumped the stand and set the flashlight swinging. The noise had stopped when he laid his hand on the strings, but as he reached to right the flashlight, it began again. The volume switch seemed to have disappeared.
And then Bart came in. Daron yanked the cord from the jack of the guitar. “Hi.” He was too stupefied to smile or say anything else.
“Hi.” A curly haired kid about Daron’s height (which is to say, pretty short) said, “My name’s Bart. I, uh, heard the noise.”
Daron looked at the cord in his hand. “Yeah.” He patted the guitar. “All the knobs must have gotten turned on the way here.” He found the one on the stereo for good measure and turned it down. “Oh, my name’s Daron.”
“Good to have an electronic instrument on the hall. Everyone else plays oboe or something.”
Daron thought for a moment about the Dream Academy and was almost nauseous. “What do you play?”
“I play a lot of things. But the important one now is the bass. I have an electric fretless, a Steinberger and a stand-up. I did my time in orchestra, man. You won’t catch me there again.” Bart’s curls danced as he shook his head.
“Why not?”
“I’m sick of it. I’ve been doing that stuff all my life.”
Daron let that sink in for a moment, trying to figure out where he stood in comparison to this pro. “I’ve never seen an orchestra play,” he said quietly. “I mean, other than one I was in. But I can play classical guitar.”
Bart seemed even more awed than Daron had been. “Wow. Where are you from, anyway?”
“Nowhere. You?”
“Nowhere special, anyway.” Bart shrugged. “But hey, is this all your stuff? I think it’s required for you to have an acoustic, you know.”
“I know. But, I couldn’t carry it and it was a piece of junk, anyway.” He winced slightly. “So I sold it. I’m going to have to get another one.”
“Well, that’s cool. I’m right across the hall in 518, if you ever want to jam. See ya.”
“Yeah, see ya.”
Bart closed the door and Daron was left in the flashlit room to plug the guitar back in.