(Have you checked out the fun rewards in the Kickstarter, yet? See more news below… -ctan)

Later that week Ziggy and Barrett and I met at Barrett’s office to go over some things. There was a new, very airbrushed, very difficult-to-ignore poster of Ziggy on the wall. He was wearing a white oversized jacket, his chest bare underneath, white jeans, and white boots, a microphone in one hand, his head turned to the side to sing into it but his arms in a “W,” thrusting his chest forward. Along the bottom were the South American tour dates.

“Horns?” Barrett asked, trying to bring my attention back to the discussion.

I had to move so I was sitting under the poster so I wouldn’t stare at it. “Um. I think so. Well, definitely for Latin America. But I figure I need to get the arrangements firmed up and produce charts first.”

“Okay, you’ve got the number of the copyist?”

“Yeah.” The number was actually a sheet music service in the city where they had a bunch of copyists working. I was happy not to have to be the one to actually try to make all the charts myself, even if I did have a computer program to make it somewhat easier than in olden times.

Many logistics were discussed, including our timelines for rehearsal and when everyone would get measured for costumes, i.e. when Linnea (The Aesthetician) got back from a trip to Puerto Rico next week. What the costumes would look like and some other issues of that nature, including where in the stage design we were going to put the second drummer, would also have to wait until she got back.

We had basically a little over a month to pull together the musical part of the show. The fact that I was going to go out on tour again with Nomad starting July 21 made things a bit complicated. Normally one didn’t rehearse a bunch, then put everyone on ice for 6-8 weeks, and then hit the road, but it was something of a necessity. So the idea was we would get the band into shape, record versions of the arrangements we were going to do so that the dancers could rehearse while I was gone, and then reconvene everyone the first week of September for actual full rehearsals and dress rehearsals.

Dress rehearsals with actual dressing. What a concept.

From there we hopped into a car with Tony who was supposedly taking Ziggy to a dance workout and I was just along for the ride. Once I got in the car, though, and it was moving, Ziggy said to Tony, “I got my schedule mixed up. It’s vocal training day.”

“Well, that’s this direction, too,” Tony said, gesturing up the avenue. “Fortunately.”

Ziggy turned to me. “You’re coming in, right?”

I was sober at that moment and very very focused on him, so I neither missed nor decided to ignore the sudden anxiety in his voice. “Is something wrong? Ziggy, I’m sure your voice is fine.”

“But it’s changing. I mean, it’s changed since Priss has been working with me. You haven’t heard it all.”

“Are you worried I’m not going to like it?” I could not figure out why he would be anxious.

“Just come in with me?” His hand slipped into mine.

When we got upstairs, though, I figured out it out–it had nothing to do with his voice–when Priss saw me and exclaimed, “Aha! You brought him finally.”

I may have taken a step backward in the cramped apartment. “I’m not here for–”

“Come.” She took me firmly by the hand and pulled me gently but unyieldingly toward the piano, the way you would with a recalcitrant five-year-old.

I relented and sat down next to her, but said, “Priss, I don’t need–”

“He told me you have new music and you’re going to be singing every night.”

“You’re being stupid about this.” She swatted me on the thigh, not hard, but enough to make me jump a little. “I don’t understand it. Are you that thick in the skull? Your voice is not like a guitar, not like a string, not like a piano that you can have tuned or replaced. You have one. One instrument. One.” She pointed a single finger almost accusingly at me, aimed upward at my Adam’s apple. “If you damage it, mis-use it, or wreck it, you may never get it back. And liebling here tells me you don’t mistreat your instruments. You take special care of them. You hire people to care for them and maintain them. This instrument–” She reached for my throat and I half-thought she was going to choke me like Darth Vader, but no, she was just indicating my voice box, “–no one can care for but you.”

“Pffft. You don’t even know what your range is.”

Ziggy, who was standing at the side of the piano, shared a look with her. I turned and looked at him. “Is there something more going on here that you’re not telling me?”

“What’s going on here is it makes no sense you’ve been resisting this so vehemently, Daron,” he said. “If there’s something more going on, it’s in your head.”

Ugh. The sinking feeling in my stomach undoubtedly meant he was right. “Okay, fine. Whatever. But I’m telling you, Priss, my voice is nothing special, I’m a run-of-the-mill rock backup vocalist at best, and you’re wasting your time giving me the same treatment you give him. He’s the Stradivarius; I’m the school rental violin.”

“All the more reason for you to learn how to get the most out of your meager cords, then,” she said with a sniff. “Let’s warm up, shall we?”

So she took us through the usual sort of warm up, starting the “ah” and working first down the scale from the middle and then up, but not too high. Then “oh,” “oo” and eventually to “ee” going from loosest to tightest throat. Down, then up. Then up again. I stopped thinking about it and just let the sound go right from my ears to my mouth. Then we did syllables–“mah, meh, mee, moe, moo”–working upward, and finally she had me sing a round by myself with her just hitting the piano and the first note.

She was smiling triumphantly at the end of that, and I looked back and forth between her and Ziggy trying to figure out what telepathic messages–or prior conversations–they shared.

“Daron.” Ziggy put his hand on my shoulder. “Has it never occurred to you that every damn day you lead me through a vocal warmup and you match me note for note?”

“Yeah, but just because I can squeak out some high notes doesn’t mean I’m–”

She swatted me. “Stop acting like a schoolboy or I will have to treat you like one. What is it, I remind you too much of the childhood piano teacher you hated? What? I am accustomed to my students acting a bit more professionally.”

Okay, that shamed me into behaving. And I had no idea why I was acting like I was. “Sorry.”

“Listen to me.” She put her hands onto my cheeks to force me to look into her eyes. “You have the same range as liebling here and nearly the same type of voice. I spoke to you once before of chest quality and the transition to head voice, yes? But you have not developed your top properly and with all your ‘back up singing’ you have pushed your chest voice too hard. All your development has been in the mid-part of your range and at the bottom. You will lose the top if you do not build on it now.”

I couldn’t argue with that not only because I didn’t know what to say, but because with her hands on my cheeks like that I couldn’t actually say anything. Her eyes were very intense, like she really really cared. Like she was telling me I had lung cancer and needed to quit smoking.

“You are young. If you start now, you have a chance.”

I nodded slightly and she let go of my head, perhaps realizing she was squeezing my face kind of tight. “I really am not cut out to be a lead singer–”

“But you are one now. Regardless.”

“True.” She was right. I could also feel Ziggy’s eyes on the back of my head. What I couldn’t feel was whether he was happy or upset. It was too hard to tell through my own emotions which I was, as usual, tamping down hard to try to take in new information about something musical. In other words, I wasn’t sure whether I was happy or upset, either. Or both. “Tell me more.”

She launched into a more detailed explanation of my vocal timbres, running her hands up and down the keys of the piano, to illustrate where in the scale she was describing. She told me to try to forget whatever I had half-learned about opera vocal styles and voice coloration and “fach” because most of it wasn’t applicable to modern rock or pop music, now that we had amplification and also the ability to record at very low volume levels, too. She had her own system that re-used a lot of the same words as the opera terms, while adding in other Americanisms she’d apparently learned from watching baseball on TV, like “sweet spot” and “strike zone.”

“Singers are like baseball hitters,” she said. “A very very versatile one can hit any pitch in the strike zone, but most have specific zones or specific pitches–you see?–that they hit best. You, you used to be able to hit every pitch but now you need to work on your swing to hit the high pitches with authority again.”

I wondered if she was even aware that the word “pitch” in baseball didn’t have any relation to the word “pitch” in music, but it didn’t matter. When she talked about how some notes were home run pitches for some singers and some weren’t I knew exactly what she meant.

I could see why she had a reputation as a go-to person for singers like Ziggy and Sarah.

What followed was a short vocal lesson for me, teaching me a couple of exercises I was supposed to do on my own, and telling me a few things not to do while rehearsing.

And then I sat on the couch across the room feeling utterly emotionally exhausted while Ziggy went through his stuff with her. At least then all I had to do was sit there and listen to his voice fill up my ears.

Anyone want to start a pool on how long it would take me to figure out why I was so fucked up about my singing? 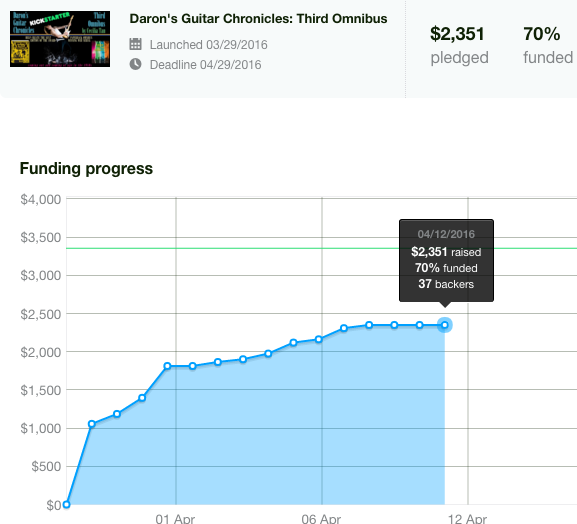 Uh oh. I was running a writers retreat over the weekend, so I wasn’t online much to tweet or post about the Kickstarter and as you can see it flatlined for 3-4 straight days! Eeep!

I’m going to push for us to get to $2,500 ASAP though–how’s this for an incentive? The fantastic cover designer we’ve had on the previous two volumes emailed me some ideas for this one…and I’ll post them once we hit $2,500! Sound good?

Also mark your calendars! A week from tonight I’ll be back in Massachusetts (from Vegas, where I’m headed right now…) and I’ll do a live video chat! I’ll do a video chat from 9-10pm eastern time (6-7 pacific) and if we’ve hit $3,000 by 10pm that night, Daron will do a backers-only chat! Sound good? Wish me luck in Vegas, meanwhile!