Finally had a chance to chat a bit with Matthew in that green room. About nothing consequential, you know. But it was good to have people in my life who I didn’t have to try to impress. Speaking of which, Jonathan was at that show, too, but later.

I felt like having told Remo that I wasn’t dosing before soundcheck that meant I shouldn’t. So I didn’t. Which might be why I remember it as clearly as I do. Or maybe because it was particularly memorable. Which it was.

We got up there like usual, everyone gathering around for our daily ritual, the lounge act.

To everyone’s surprise, Remo raised his hand and said, “I’ve got one. Am I allowed to do one?”

“Of course you’re allowed to do one,” I said. Everyone was chuckling a little at that, anticipating something goofy from him, I guess.

He slung one of his deep-body acoustics over his head and just checked the tuning for a sec, picking at each string a couple of times but not adjusting anything. And then he began a kind of Travis picking riff–reminded me a little of Johnny Cash’s “Ghost Riders in the Sky.”

Remo’s voice isn’t as low as Cash’s, but when it’s not embellished or pumped up with multitracking or slick production it has a similar kind of folksy directness to it. The slight burr, the slouch of his vowels, it’s like playing on a classic old tenor sax instead of a shiny new Kenny G soprano.

He started to sing a song I’d never heard before. It had a kind of classic countryish blues sound to it, again reminding me of Johnny Cash, making me wonder who did the original.

I thought immediately of Ford, of course. Mel breastfeeding him was a fairly common sight by that point, didn’t even faze any of us anymore. There were a couple of titters from the band.

Next verse came around and he hit the riff a little harder, giving it a little swing:

He even swiveled his hips on the word “conga,” drawing a couple more laughs, and then going into the chorus of “Oh, gimme that bottle, bottle, gimme that bottle.” Catchy as hell. Then he picked through the progression again, readying himself to sing the next verse, and he slowed down just a little.

Chorus again, but the burr in his voice now was thick with emotion. Remo’s eyes were almost closed, whether because he didn’t want to be distracted by any of us or what, I don’t know. Then he came to the final verse, picking in half-time now, heartbreakingly slow and delicate.

Bam. I didn’t see which of the Mazel brothers stormed off first and which one chased him, but they both were off like a shot before Reem could start the chorus one more time. He stilled the strings with the palm of his hand and said, “Goddammit,” handed his guitar to Flip, and went after them.

I looked at the rest of the band and they looked at me. “Take five,” I said with a shrug. “Or maybe ten. How about don’t go too far in case this blows over faster than expected.”

I wandered back out to the bus since from what I could tell Remo, Alan, and Alex were having it out in the green room. I did not feel the need to be part of that conversation. Martin didn’t either, although I asked him while I dug in my bag for the amber bottle, “Has this all been brewing for years and I just didn’t pay attention until now?”

“Did you feel, um, criticized or put down by the song?”

“Me? No. Pretty sure that’s himself Remo’s putting down, but I can see why A and A might’ve taken it personally.” He stretched: Martin could touch the ceiling in that section of the bus. “This’ll be good. Remo and Alan needed to have it out. Alex plays the peacemaker, usually. Been a while since they had a blowup. This one’s been brewing for a while but with everything that’s been going on it waited until longer than usual.”

I washed down a muscle relaxant with some kind of bottled drinkable yogurt from the fridge. “Did Remo write that song?”

I went to look for Artie.

—
It’s Election Day! Since I’m sure everyone’s in a voting mood, how about this? Vote here for which of Daron’s favorite bands you like best: 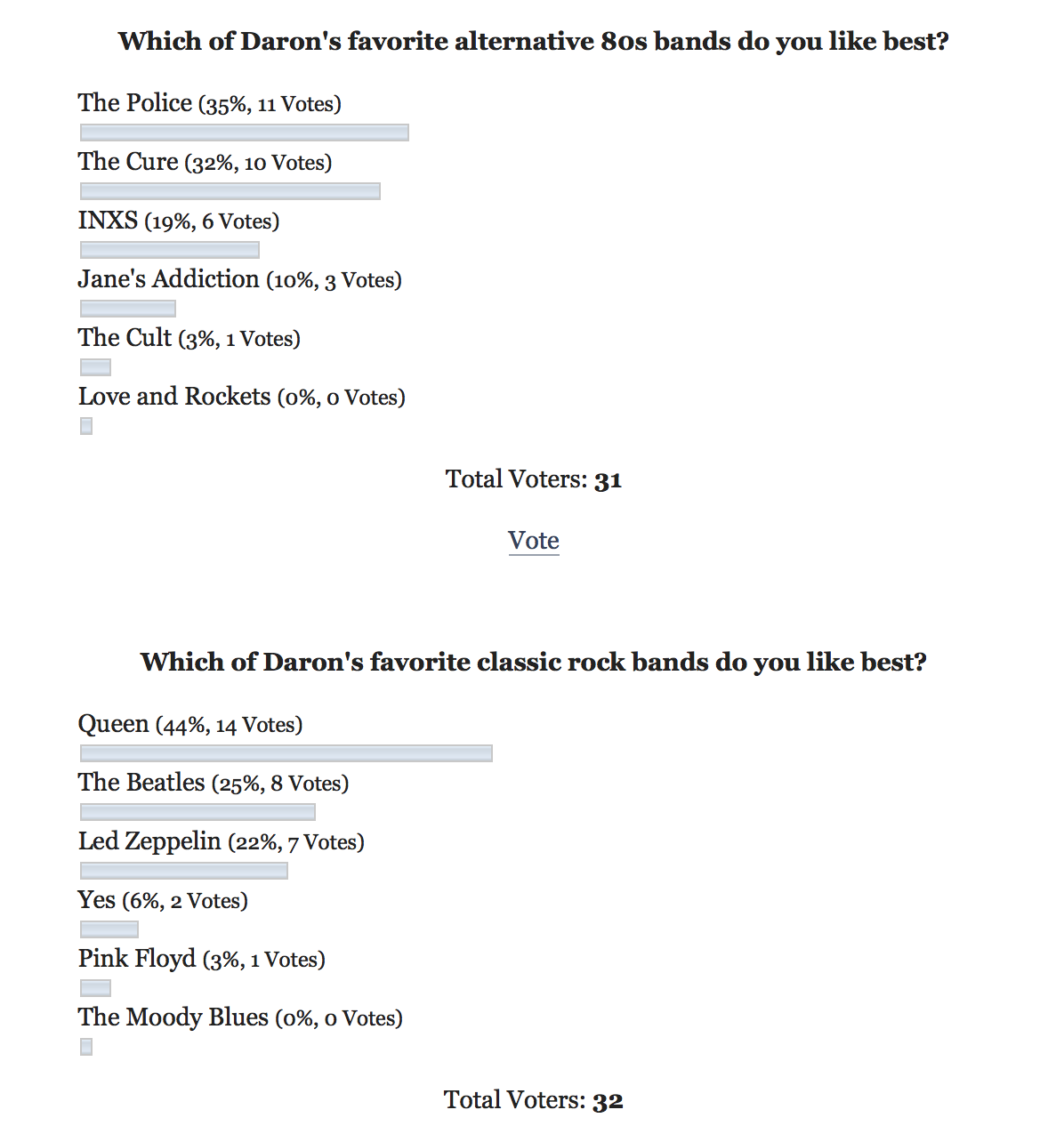