I don’t understand why people love me.

And that’s probably what a lot of my troubles that tour boiled down to. I was coming to terms faster with the fact that I could love other people without understanding it than I was the opposite.

By showtime the heat had let up a little, so it was hot but in a bearable way. There were large fans set up on either side of the stage, strategically placed to make up for the lack of breeze.

“Is this my first time in Alabama?” I asked Flip.

“Beats me,” he said, while he was giving one of my guitars a last tuning before the show. The side areas of backstage here were just random sections of space under tha main stage roof but out of sight of the crowd, road cases piled at the edges. “But quite possibly, yeah.”

“I can’t say I’m going to remember much of it.” I vaguely wondered why I hadn’t seen much of Jam since the fight with Ziggy, and vaguely wondered if Ziggy had told him to make himself scarce. Not that I minded. I just wondered. Happy Occident had played their set and retired more or less immediately to their well air-conditioned bus.

“What’s your impression so far?”

I looked around. “It’s hot. And we’re in the middle of nowhere. But that’d be my impression of Great Woods on an August night, too.”

“Details, details.” I made him give me the guitar so I’d have a place to rest my hand. The rest of the band were starting to filter over.

Ziggy flitted through, kissed me on the ear, and said, “Break a leg.”

“I will. I mean, thanks.” I watched him walk back toward the green room. I wondered if he was going to watch the show. I wondered if it mattered to me if he did or not. My brain was doing a lot of wondering and not a lot of answering things right then.

Shit. My right pinky felt stiff. It was the finger I didn’t actually have to use, but it still wasn’t a good sign. I rubbed it with my other hand and I could feel it was tingly, too. I dug my left thumb into my right palm, trying to work out the kinks.

I know I’ve said before I don’t believe in god, but I believe in prayer. Why, then, did I make a deal with the devil instead of praying for a miracle? I thought, if it’s a choice between playing through pain and not being able to play at all, let me choose pain. I’ll pay that price. Just get me through this.

At that time it didn’t actually hurt, but I was more afraid of a cramp that would make my fingers useless than I was of whether it would hurt.

I shook it out. It felt a little better. I tried to put it out of my mind.

Remo stepped into place beside me. The lights changed and prompted cheers from the crowd. It was fully dark night out there now; sunset had happened before Happy Occident had gone on. The gals and horns went on first, taking their places without fanfare, but drawing a few more cheers of anticipation anyway. Then Alan went out and started holding a chord. Alex went next and after a quick wave to the crowd and plugging in, added a thump of bass beat to it. Martin waved and started people clapping in time from the edge of the drum riser by beating his sticks together over his head and then settled himself behind the kit to add a full backbeat to it.

When we’d started the tour it was me next, Remo last. Then for a little while it was me last, when we were kind of faking out the audience about whether I was upright or not. We’d gone back to Remo last more recently, though.

I had no good objection to that so I said, “okay,” and although that meant I still walked in front of him we were still basically taking the stage at the same time. Remo was ready. I gave a quick look around and counted off, and we kicked into the real intro to the first song.

I did fine for about an hour, and then the “be careful what you wish for” portion of the evening set it. There was a segment we did where the band basically just laid down a super minimal backbeat and Remo would solo on top of it for a while, kind of Santana-esque but without the Latin flavor. It was when I usually had a Gatorade.

This time just as Remo was about to launch into it, though, he broke a string, and so I jumped in and played a solo–it came out really good, too–that was a couple of minutes long since it took a bit longer to get him a replacement guitar than one might have hoped. Not a big deal, this kind of thing isn’t unusual. The only problem was that there was a pain starting to build up between my thumb and first finger, the two fingers holding the pick.

I poured what I could of that pain into what I was playing, but that didn’t mean it hurt less. Hell, for all I know I made it hurt more.

By the time Remo came back I’m not sure how I was holding it together but I was. And then he jumped in and played with me, and we traded off back and forth a bit, and thankfully the cramp eased off. I completely forgot to drink the Gatorade, though. Which was not good for the rest of me.

By the time the first set ended, I was shaking and Flip practically force-fed me the bottle. I tried to explain that my hand was killing me and he explained that he had crushed the remaining half Flexeril pill into the drink. I guzzled it.

We did the two “loud” encores. I made it through without collapsing or puking. I consider this a good thing.

After, though, I was very hot, and parched, and apparently saying incoherent things (I don’t remember that part) so they called me an ambulance. I knew I must really be feeling terrible because the only thing I felt about seeing the ambulance was intensely grateful.

The medic was a gruff, older guy, and the driver was a younger guy, and after being informed of my tendency to heatstroke they decided to try to treat me there instead of the hospital. This used a lot of damp, lukewarm towels, which was interesting because I would have thought they’d use cold water but I was kind of glad they didn’t. I was apparently coherent enough to ask about it and the old guy explained that if you shock the skin with cold, the blood vessels will constrict and pull even more heat into the body. “And so if your brain wasn’t already boiled, then it would be,” as he put it.

He went on to tell me about making that mistake in Viet Nam (or was it Korea, I’m not sure) and sending the patient into a seizure.

Anyway. They got my core temperature down, and rehydrated me, and sent me on my way.

“Good thing tomorrow night’s indoors,” Remo said as he and Flip helped me into the bus. All my muscles felt weak and I couldn’t tell if that was from the aftermath of the heat or from the drugs. Flip had the clothes the medics had taken off me and added them to show laundry. I tossed him my damp underwear and put on a clean pair, and a clean T-shirt. The AC was going full blast in the bus and put on the pajama bottoms I always packed but seldom actually wore.

Ziggy pulled aside the curtain enough to show his face from inside the bunk. “You coming in or am I getting out?”

“So far, no.” Well, it had hurt a bit at the peak of the fever, but not like it had some recent times. “One medical emergency was my quota, I guess.”

Court peeked out of her own bunk. “You okay?”

“I’m fine. Better than last night, in fact,” I said. Which was technically true, I guess. At least right at this moment I wasn’t in pain. We’d see how I felt when the last of the Vitamin F wore off. “Get some sleep.”

Ziggy scooched over and I climbed in with a small towel. It really was ridiculous to both be in one bunk and yet I wouldn’t have had it any other way. It meant we didn’t need to clear a separate one for him as an extra unanticiapted passenger and, come on, like I wanted him anywhere but glued to me.

“Well, that could’ve gone better,” I said, folding the towel in half and laying my head on it. My hair was wet because they’d also gently doused my head with the lukewarm treatment a couple of times. “I guess I can see why everyone thinks I’m not going to make it.”

“We don’t ‘think’ that you’re not going to make it so much as worry that might be the case,” he said. “To be precise about it. Don’t make it sound like we’re not on your side.”

“And no one likes to see you suffer.”

“If you say so,” he said, which clearly meant I don’t agree but I won’t argue. He changed the subject. “Carynne’s going to meet us in Mississippi.”

“Yes. I think Barrett wants to make sure we both come back intact so he sent her in person. She’s there already by now.”

I studied his face in the glow of the reading lamp that was built into the alcove. “What about you? Are you doing all right?”

He sniffed dismissively. “I’m fine. Worrying about you is doing a number on my nerves, but I’m fine.”

“This time tomorrow you can stop worrying.” I think maybe I actually believed that. Thinking about it now of course it’s obvious that just because the tour was ending didn’t mean my problems were going to magically disappear. But the main difference would be that for a couple of weeks I wouldn’t have to cope with those problems front of thousands of people every night. I couldn’t remember if we had eleven days or seventeen days before we left on Ziggy’s tour. I didn’t want to know. Long enough, I told myself.

I crept out to piss maybe two hours later. All that hydration had to go back sometime, after all. I pissed and then took some regular old ibuprofen just as a prophylactic. Part of me was starting to think that a lot of the physical symptoms I was having were actually all in my head.

If that was true, then fooling myself into thinking I was fine was the only way to handle it.

—
Last day to vote in the cover poll: 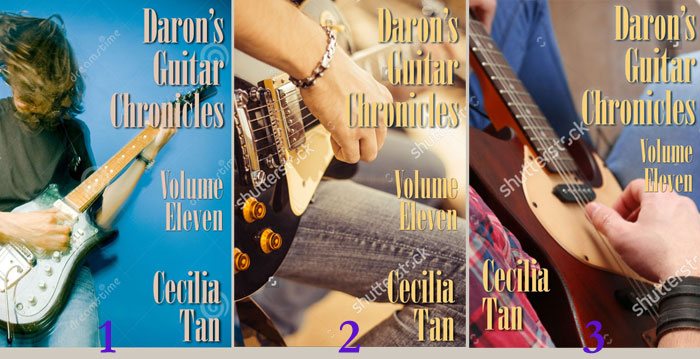 (if you’re on LJ, Wattpad, or RSS you may have to click through to the original post at https://daron.ceciliatan.com/?p=6027 to make sure your vote is registered):