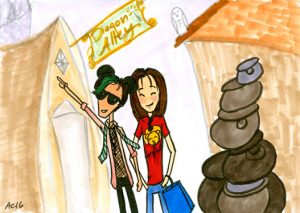 Any thoughts on what Ziggy’s wand would be made of? Daron’s would clearly have a core of guitar string 😉

(A note about the Orlando fanworks & fanworks submitted earlier in the year. I apologize for how long it’s taking to get them posted. I hadn’t counted on traveling taking up July in the way it did, or needing to disconnect from much of the internet after some of the news in the US. It’s been a rough summer, yeah? I have several more submissions waiting, including songs from Bill and Meg and stories from S and Chris, and will be posting those over the next few weeks. I promise you, they’re all worth the wait.  ~sanders)